Speed Secrets: How To Reel ‘Em In 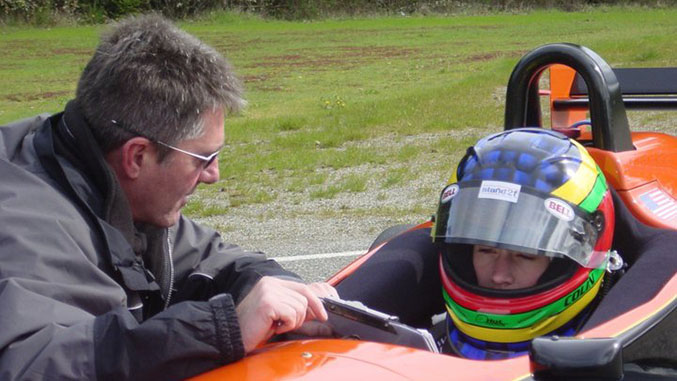 There is a justifiable concern amongst many automobile and driving enthusiasts about the way many teens (and even those in their 20's or 30's) have less of a passion for cars and driving than many older people. And some believe that the sport of performance and race driving may begin to suffer from fewer participants (if this hasn't happened already) as the "older" crowd "moves on." That's why I appreciate Ingrid Steffensen's article this week. As many of you know, a few years ago, Ingrid wrote a fun and interesting book, Fast Girl, that is all about how she – someone totally uninterested in driving on a track – became addicted to the sport. So, I think she's well-qualified to talk about how we all should do what we can to get others interested – no, addicted – to our sport. -Ross

Remember your first time? Of course you do! No, I’m not talking about that first time. That’s a subject for a completely different column. I’m talking about the first time you ever smooshed a helmet on your head and drove out onto a racetrack. Remember what it felt like? Was it—as it was for me—a mixture of excitement, anticipation, and abject, pants-wetting fear? What circumstances brought you there? Who was the motivator? What kept you coming back for more? How did you feel when that first time was over?

If you’re so deep into this crazy thing we do that you’re even reading this, then that first time is probably ancient Babylonian history. By now, you probably take for granted the skills that you’ve learned, the friends that you’ve made, the culture of the paddock, the argot of the garage. The attractions and the pleasures are pretty much self-explanatory, right? Wrong.

If our beloved sport is going to continue to grow and thrive, we have to bring in new participants. Whether you’re an instructor, an experienced driver, or even relatively new to the learning curve, it’s to your benefit to recruit others. Not everyone you drag along with you to the track is going to want to give it a try, and not everyone who gives it a try is going to become an addict, I mean, regular participant.

So what are the things we can do to make converts of the novices? One answer is to construct special events around this purpose. Two clubs I instruct with have made efforts to appeal to newcomers. One holds an annual DE event called “Introduction to the Track” which dedicates one entire run group solely for those who have never driven on a track before—“Never-Nevers” in their parlance. They are assigned a mentor from the club who is not the same person as their instructor, and these mentors contact them ahead of time to introduce themselves and answer any questions, from the essential (tech’ing the car, acquiring a helmet—which, incidentally, the club also makes available to borrow) to the mundane (how should I pack, where can I stay?). The club also sets up a tent where participants can go for a cold bottle of water, sage advice, or to help track down people, equipment, or information. It’s a two-day event, and any novice who signs up for both days gets promoted to the standard novice group on Day Two, which opens up a new “Never-Never” run group for those who only want to come for a single day. All of these “Never-Nevers” get a good discount, too—much like a savvy crack dealer who gives out the first hit for free.

Another club I instruct for has just this year launched an event they dub “Taste of the Track.” For the enticingly low price of $100 (what a bargain!), a novice arrives late in the morning on Sunday, gets the car tech’ed, borrows a helmet, has lunch with his/her instructor, gets a tour of the facilities, one classroom session, one ride-along session with the instructor, and one session driving on the track with instruction. Limited to 10-12 participants, the event has been very successful so far and has sold out each time it has been offered. Post-participation surveys indicate that 100% believe they will return for either an autocross event or another high-performance drivers' school.

Both of these events are great ways to appeal to newcomers for whom the atmosphere and rituals of the racetrack can seem intimidating and aggressive. Another way to reach out to an underrepresented track demographic is to hold a Ladies’ Day, which some clubs do. It is certainly in the best interests of the clubs to expand membership and reach new people. Even if you’re not part of club management, however, there are ways you can be part of the recruitment process. Obviously, if you are an instructor, you are the most influential person in this process, as you have the greatest impact on what happens in the car. Are novices more work? Sure, but step up and volunteer to instruct them at every opportunity! Personally, I like instructing first-timers best of all. Although it’s certainly fun to help tweak the skills of someone who is more accomplished, the rewards of teaching newcomers are huge, precisely because they have so much to learn. And I know that if I leave the student with a sense of accomplishment, he or she is much more likely to come back.

My most recent such student was a young man who was the son of another instructor. Even though he had been coming to the racetrack for years, he still confessed to being very nervous. Pairing up with him at lunch, letting him know what to expect, and telling him some of the things I could do for him, allayed his fears to an extent. During the ride-along, I was able to give him a sense of the line by talking him through everything I was doing, lap after lap. When it was his turn to drive, I helped him to manage traffic, and was careful to give him only as much instruction and information as he could handle—and that would keep him safe—to keep him from becoming overwhelmed. Staying calm, praising wherever possible, and keeping commentary positive, led to big smiles when the session was over. Will he come back? He says he can’t wait.

You don’t have to be an instructor, either, to help reel in new customers. The most obvious thing to do, of course, is to bring your own friends (and their friends, too, and anyone else who displays even the remotest curiosity). They don’t even have to drive to have a good time, spread the word, and maybe try it out themselves the next time. If your organization permits it, get them rides with instructors. Believe me, that’s all they’ll be talking about at the water cooler on Monday. Also, being on the lookout for lost lambs and giving them a buddy—someone to park next to, sit with at lunch, or have a beer after the last checkered flag has been thrown—will go very far toward ensuring that someone who comes once will come back for more.

Bait the hook, cast the line, reel ’em in!