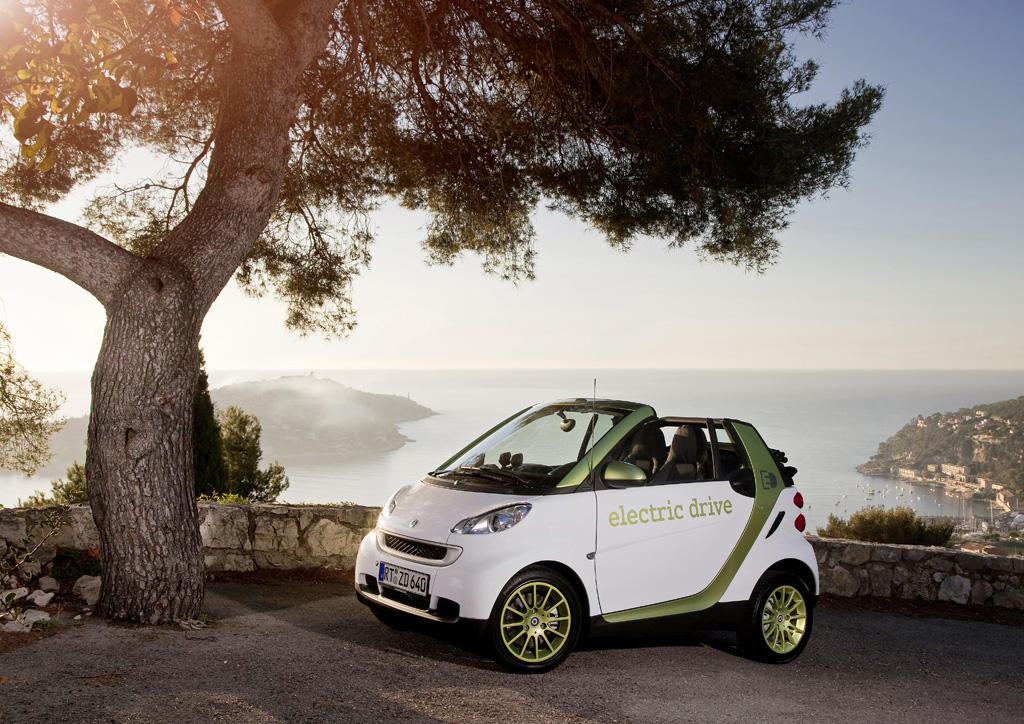 Smart has announced that its all-electric Fortwo will be available in North America this Fall. It has been on sale in Europe since November of 2009. The 30 kilowatt electric motor provides 88.5 pound-feet of torque. The Fortwo can be charged at any standard socket, which should make recharging a fairly straightforward affair.

The Fortwo ED can cover 83 miles on a fullcharge, with an overnight charge providing more than enough juice for a full “tank.” We don’t have much info on pricing, but the Fortwo ED should be eligible for a $7500 tax credit from the U.S. government.

In Europe, Smart has been leasing Fortwo EDs for 4 years and 60,000 kilometers. It would be safe to assume there would be a similar setup in the U.S.

Please scroll down for official press release from Smart

Generation differences
First generation smart fortwo electric drive Second generation smart fortwo electric drive
In everyday use in London since 2007 Production of a small series started at the end of 2009
Battery: NaNiCl (sodium-nickel-chloride), works at temperatures between 280 and 320 degrees Celsius, and therefore needs to be heated. Also has an insulated casing like a thermos flask. Battery: lithium-ion, works at normal temperatures. The lithium-ion battery enables a cold start at minus 25 degrees Celsius. More useable energy with the same size. The same battery size as for the first generation smart was chosen. The range has increased from 100 km to 135 km.
Power output: 20 kW Power output: 20 kW plus peak power output of 30 kW for approximately 2 minutes. The peak power can be called up with the kickdown function.

Electronics optimise the battery status and power consumption
Special electronics ensure that all is well with the battery. This battery management system constantly monitors voltage, electricity and temperature. If one of these parameters reaches a specified limit – for example when driving up long hills at constant peak power (kickdown) – the electronics reduce the power output. However, this is barely noticeable and it rules out the risk of battery overload.
The electronics also monitor the charging process and control the capacity display. The vehicle’s power electronics supply the vehicle’s electrical system with electric current from the battery via a DC/DC converter. In addition, they also control the heating and air conditioning, for example, to minimise the strain on the battery. Clever drivers can air condition their smart fortwo electric drive
in advance as long as their vehicle is being charged at home – the long-standing dream of stationary cooling becomes a reality! No other car offers this comfortable option.
Extensive equipment
The new second generation smart fortwo electric drive is based on the smart fortwo coupé/cabrio with high quality equipment. As well as air conditioning with automatic temperature control and pre-air conditioning, the equipment includes smart radio 9, electric power steering, electric windows, electrically adjustable and heated door mirrors, a two-spoke leather steering wheel, leather gear knob and 12-spoke alloy wheels. In addition to the battery indicator, an ammeter shows the consumption and the recuperated energy. Furthermore, all new second generation smart fortwo electric drives have green painted alloy wheels, green mirror caps, green contrast components and a green tridion cell created with green adhesive foil. The words "electric drive" on the rear and in the mirror triangle also draw attention to the vehicle’s special status.
Very low costs
There are also numerous factors in different countries that make electric mobility attractive for customers. Tax relief and other government subsidies play an important role. For example, the state of Monaco offers tax relief of up to €9,000 to electric car owners. Other countries have also set up funding programmes for sustainable mobility. France grants a "super environment incentive" of €5000 for every vehicle emitting less than 60 grams of CO2 per kilometre. In Great Britain there is a bonus of up to ₤5000 and in Belgium of €4540. In Denmark such cars are exempt from the extremely high registration tax and there are lots of further examples in Europe. In the USA there is a federal tax benefit of up to $7500 plus additional benefits depending on the state or city. China and Japan have announced subsidies of €6,500 and €11,000 respectively.
The maintenance costs are considerably lower than those of a smart with a combustion engine as the battery, motor and other components of the electric drive are maintenance-free.
smart fortwo electric drive in major cities in Europe and the USA
Since the end of 2009 the second generation smart fortwo electric drive has been delivered to selected customers. Leases are offered for a period of four years and 60,000 kilometres. The first vehicles were handed over to customers in December within the framework of the "e-mobility Berlin" project. Here, in cooperation with the energy provider RWE and with the support of the German government and the city of Berlin, Daimler is creating ideal conditions for running battery-driven vehicles with no local emissions. This includes setting up a network of electricity charging stations that enable intelligent communication between electric vehicles and the power network so that the battery can be charged when electricity is cheapest. But as mentioned, the smart fortwo electric drive can also be charged at any household safety socket with a 16 amp fuse (standard in Germany and other countries).
Further new generation smart fortwo electric drive vehicles will take to the roads of Hamburg, Paris, Rome, Milan, Pisa, London and the Midlands, Madrid, Zurich, Portugal, Denmark, the Czech Republic, Austria, Belgium and the Netherlands during the first half of 2010. In the autumn of 2010 the smart fortwo electric drive will then also be launched in cities in the USA and Canada, and from 2011 in some Asian countries. There is already a very lively demand for the smart fortwo electric drive, and from 2012 it will be produced in large volumes as a normal part of the smart range and sold via the smart dealer network. This third generation will be fitted with a new lithium-ion battery which Daimler is developing to production maturity in cooperation with Evonik. The lithium-ion battery currently used comes from Tesla and represents state-of-the-art technology. However, further progress is anticipated. The main differences between the two batteries lie in the structural design. The Tesla battery consists of lots of cylinder-shaped cells. The Daimler battery will be made up of fewer but larger plate units. This will first and foremost enable a greater energy density to be achieved (with greater energy content for a higher range) and an even longer life.
With the smart fortwo electric drive the brand is underlining its pioneering role on the road to attractive individual mobility with no local emissions in cities and urban areas. Dr. Joachim Schmidt, Head of Sales and Marketing at Mercedes-Benz Cars says "All in all we believe that the outlook for electric mobility is good. Whilst our competitors are still presenting electric show cars, smart brought production models that are fully suitable for everyday use to the roads last year. This once again demonstrates our technical expertise and responsibility."