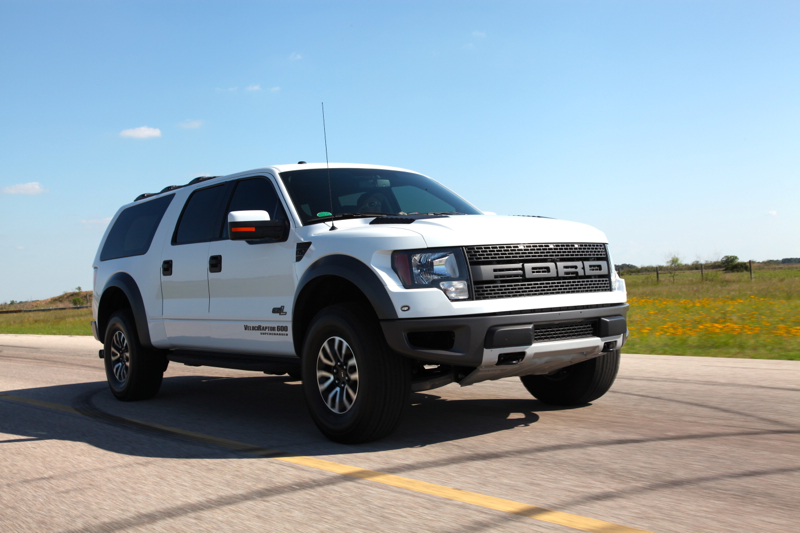 The most pressing issue we can find with Ford’s awesome F-150 SVT Raptor is that even in its biggest body, it can only take five people across sand dunes at 80 miles an hour. What if your brood includes a few extra bodies? You’d be forced to choose, and then the kids that got left behind would develop crushing abandonment issues, all because you bought a Baja racing truck with just five seats. For shame!
It’s a good thing then that Hennessy has come along with an eight-passenger version of its VelociRaptor. Based on a standard Ford F-150 SVT Raptor, Hennessey has essentially fitted some new sheetmetal, and tossed a few seats in the newly covered bed. Hennessey’s tuners have let the work of Ford’s engineers do the talking, leaving the majority of the Raptor’s systems as they came from the factory.
Those looking for an extra bump in horsepower to go along with the extra 600 pounds the SUV package adds can opt for the VelociRaptor 600 Supercharged package, which tosses a supercharger on the 411-horsepower, 6.2-liter V-8. Other upgrades in the package include an air-to-water intercooler, an HPE engine management system, and improved fuel injectors. Output is elevated to 600 ponies, and drivers can get to 60 in just 5.9 seconds instead of 7.5.
The VelociRaptor SUV can also be upgraded independently of the 600 Supercharged pack. Brembo brakes can be added to the front, while even larger wheels and tires can be fitted. There are also a host of interior upholstery and electronic upgrades that can be had.
Hennessey is only planning on producing 30 units per year. And as the company hasn’t fully tested its off-road prowess, it’s recommending owners don’t go crazy on the dunes just yet. Instead, founder John Hennessey says, “If you’re looking for the ultimate vehicle to drive from Aspen to Telluride in January, the VelociRaptor SUV would be perfect." So really, this is more of a GT car to the standard VelociRaptor’s track-day special. Fine by us.
Pricing is a bit extreme, starting at $149,500. That’s an easy pill to swallow, though, as the alternative is years of visits to the shrink for your three least favorite children.
Please scroll down for the official press release from Hennessey.
VelociRaptor SUV – Now Available
SEALY, Texas – Hennessey Performance (HPE) has announced that it is offering its VelociRaptor SUV conversion.  Based on the Ford F-150 Raptor, the team from HPE transforms SVT’s super crew cab pick-up truck into a full-sized sport-utility vehicle (SUV) with seating for up to 8 people.
"Over the past three years we have built nearly 400 upgraded Raptor trucks for enthusiasts around the world", said Don Goldman, CEO of Hennessey Performance.  "We are now very excited to be able to offer the VelociRaptor SUV to those who like the Raptor but want more seats and space."
All of the factory Ford Raptor truck components and systems are kept in tact.  At this time, Hennessey Performance has not yet had an opportunity to test the off-road capabilities of the VelociRaptor SUV.  Thus, the company suggests that buyers should intend using this vehicle for on-road as well as light to moderate off-road duties.  "Don’t plan on pre-running Baja or negotiating Rubicon with our SUV – that is not why we built it", said company founder, John Hennessey.  But, if you’re looking for the ultimate vehicle to drive from Aspen to Telluride in January, the VelociRaptor SUV would be perfect."
The VelociRaptor SUV base price is $149,500 and production is going to be limited to just 30 units per year.  The same 6.2L 411 bhp Ford V8 powers the entry level SUV while Hennessey also offers their VelociRaptor 600 Supercharged upgrade at an additional cost.  Other optional upgrades include:  Brembo front brake upgrade, larger wheels and tires, LED lighting upgrades, bespoke interior and electronic upgrades.  Security and armoring systems are also available.
While vehicle weight is increased by approximately 600 lbs, the standard 411 bhp SUV is able to achieve 0-60 mph times of 7.5 seconds.  Bumping power to 600 bhp with the VelociRaptor 600 Supercharged upgrade will drop the 0-60 mph time to 5.9 seconds.  AMG G-Wagon and Range Rover owners beware.
The Hennessey VelociRaptor SUV can be ordered directly from Hennessey Performance or through select Hennessey / Ford dealers.
Tags:
AspenBajaFordFord F-150ford f-150 svt raptorHennessey Performancehennessey velociraptor suvJohn HennesseyUSDVelociRaptor SUV