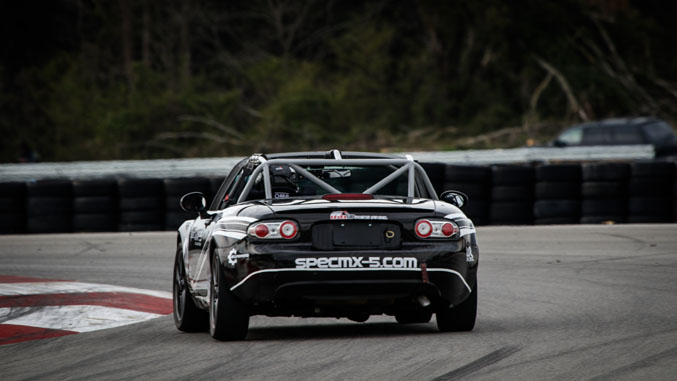 Wow, with all that contradicting information, how’s a driver supposed to know what to do? And that’s just the tip of the advice iceberg out there on this controversial, often misunderstood topic.

I’m going to share two stories to illustrate what I believe is the definitive advice (which, I suspect just about everyone who uttered the advice above thought they were giving, too).

I attended a well-known racing school at a well-known race track in California way back in a previous century, over 40 years ago. And yes, the tires were made of rubber, and the wheels were not wooden! This school taught me that I should do all my braking in a straight line before the corners, ensuring that my foot came off the brake pedal just at or before turning in. In other words, they did not teach trail braking, which is the act of easing off, or “trailing” off the brake pedal while turning into the corner. Yes, trail braking is simply overlapping the release of the brakes with the gradual turning of the steering wheel. Not only did they not teach it, they said it was the wrong way to drive.

Despite being asked to stay and instruct at the school, once I’d completed the five-day course, I went home and began to prepare to do my own racing. Soon, I bought a Formula Ford and started racing at the local race track, Westwood Motorsport Park, just outside of Vancouver, B.C.

I did okay in the first three races, but I knew I was missing something. There were a couple of drivers who were consistently faster than I was, and I eventually figured out that it had something to do with my braking and corner entry speed. I decided to do something about it. In my street car, I headed to a quiet industrial park late at night, and began playing with my braking as I entered corners. I tried applying and releasing the brakes early, before I turned into a 90-degree right-hand corner. I tried leaving the initial application and release of the brakes later, so that I actually turned into the corner while slowly easing up on the pedal. I tried releasing the brake pedal slowly, then quickly. I experimented, and took mental notes of what happened – how the car turned into the corner, how much grip it had, how much speed I could carry through the corner, and whether it helped or hurt how early I could get back to the throttle to accelerate out of it. Then I got out of the industrial park before the cops showed up!

The next Formula Ford race just happened to be the biggest race of the year, a “Pro Ford Race” – one that actually paid out prize money (enough to pay for gas and hot dogs for my entire crew – one friend and my younger brother). It was also the support race for the major event, the Formula Atlantic race, with drivers like Jacques Villeneuve (brother to Gilles, uncle to the Indy 500 and World Championship-winning Jacques).

That weekend I took my industrial park lessons to the track, and changed how I braked in my Formula Ford. I found that I could move my entire brake zone – where I started and ended braking – further into the corner, and that I was now slowly (relatively speaking) releasing the brake pedal as I turned into most of the corners. I was trail braking (I hoped my instructor at the well-known racing school didn’t catch me and give me a detention!).

I had a chance to work with that well-known school later in my career, and I learned something. If I had come back for more instruction, they would have taught me to trail brake. They felt that teaching beginners to brake in a straight line before corners would result in fewer crashes. More importantly, once these newbies wanted to learn to drive even faster, they would come back to the school and pay for “advanced courses,” where they were taught the proper way to drive. It was good for business.

To my way of thinking, teaching someone the wrong thing because they’re just beginning to learn an activity, and then teaching them the right way later is just plain wrong. Do we teach kids to swing a baseball bat with one hand when they’re just starting, and then teach them to hold it with two hands once they become more experienced?

A few years ago, I spoke at a car club’s event dinner, and then provided some break-out session coaching for drivers and instructors the next day at the track. As I stood next to pit lane, a car came in from the track with a young woman at the wheel, and an instructor sitting beside her. After a couple of minutes of conversation, the instructor looked over at me, jumped out of the car and asked if I’d ride with her. He was frustrated because she couldn’t get within five feet of any of the apexes. The instructor told me that even though this was her second day of ever being on the track, she understood all about apexes and how important it was to clip past them, and yet she consistently missed them. So I agreed to instruct her for the remainder of the session.

When I got in the right seat, I noticed that she was upset. Nearly in tears, she told me that she just couldn’t do this, and that she was going to leave. I asked if she’d just drive me around the track for a few laps, and she agreed. Off we went, and sure enough, she missed every apex over the first two laps, so I asked her to pull into pit lane to talk.

Sitting in pit lane with the car in neutral, I asked her to pretend to have her foot on the throttle while driving down the straightaway, and then quickly apply the brakes as if we were approaching Turn 1. Then I told her to move her foot back to the throttle as if beginning to accelerate out of the corner, and she snapped her foot off the brake pedal and moved it back over the throttle. Next, I asked her to do that again, but this time to slowly release the brake pedal. We did that over and over again, about a dozen times, and then I suggested we head back out onto the track.

As we approached Turn 1, I said, “Brake now, brake, brake, now slowly release the brakes as you turn in. Slooooowly, ease off the brakes. Yes! That’s it!” as we clipped past the apex, the inside tires nibbling at the curbing. She’d done it. And she continued to clip every apex for the next five laps, as I encouraged her to slowly release the brake pedal entering every corner, until the session ended.

As we pulled into the paddock, she was almost in tears again, but for a very different reason. We high-fived, and she jumped out of the car, a smile from ear-to-ear. Her original instructor walked to my side of the car as I got out, and asked what happened. I told him that I’d noticed that she had a habit of snapping her foot off the brake pedal (something she’d developed from driving on the street where the consequences of doing so are minor), and that caused the front of the car to become unweighted so much that it didn’t respond well to steering input. That’s why she had been missing the apexes. So I helped her learn to slowly release the brakes as she turned into the corners.

And truthfully, I hadn’t taught her about trail braking, although she did trail brake.

The key to performance driving – at any level, any experience level – is the timing and rate of release of the brakes. If you get the timing of when you start releasing the brakes, in relationship to when you turn into the corner, and the rate – whether slow, fast, or something in between – just right, magic happens. And by magic, I mean smoothly entering the corner with speed, the car responding to your steering input, following the line you want to drive, and being able to squeeze on the power early and hard to squirt out of the corner.

The timing and rate of release means trail braking sometimes. And sometimes it doesn’t. Some corners reward trail braking, and others don’t. As a very general rule, you don’t trail brake in fast corners, and you do in slow corners; the greater the direction change that’s needed, like in a tight, slow corner, the more you want to trail brake, as it helps rotate the car by keeping more weight on the front tires.