Speed Secrets: How To Make The Most Out Of A Test Day – Part 2

Features, Racing I By Luciana D'Andretta I December 20, 2017 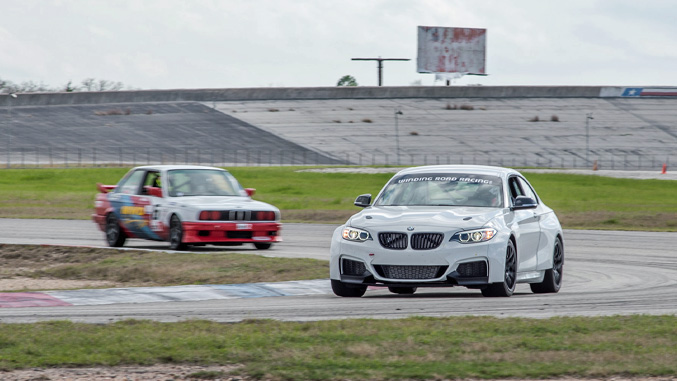 Here’s an analogy I often use: If football teams practiced the way most race drivers practice, they would show up to a practice session and play a game. But they don't do that. Instead, they break the game down into discrete skills and practice them with drills – blocking, passing, running, kicking. Only once in a while do they put all of them together to play a scrimmage (and even then, it's usually just parts of the game). But what most drivers do is go on the track and practice the whole thing, as if they were playing an entire game.

Driver development is all about strategically breaking the act of driving down into discrete skills, and deliberately practicing them. And practicing different things, because if you simply practice the same thing you've always done in the past, at best you'll get more consistent at what you've done in the past. But if you want to change a driving technique, you need to practice it differently. Even if you just want to fine-tune what you've been doing in the past, you need to practice it in a very deliberate way.

Often, this strategic and deliberate practice is not intuitive or obvious. This is where a good coach can make all the difference in the world, as they will have you practice things that you may never have thought of.

For example, if a driver is late getting to full throttle coming out of a corner, I might have them focus on a smoother and slower brake release. Sometimes that results in the driver being able to get the car turned in and rotated more easily, lining the car up to a better line exiting the corner, allowing them to squeeze back to full throttle sooner. Without the experience of a good coach, the driver might just try to apply the throttle sooner, without identifying the real core of the problem first (not having the car on the ideal line to exit the corner). At best, this will lead to the driver getting frustrated by the lack of improvement, and even reinforcing the habit of getting to full throttle late. At worst, the driver, in frustration, will use brute force, and stand on the throttle before the car is line up right. The result? A big spin, ending the test day early.

It would take the next year’s worth of articles to cover all the specific driving techniques and skills you should work on during a test day. And, well…I’ve covered them in the past articles, books, videos, eCourses, and just about everything else I do.

What I will cover right now is the approach to driver development.

First, get all the tools you can put together and tested. I’m talking about video, data, and even a stopwatch (you may need to convince someone to operate this). You may not have all the tools, and that’s okay. What’s not okay is having a tool, and having to learn to use it during your test day. Preparation is the key.

You might not be able to collect and review all the data (from video and data acquisition system) during your test day, but you should at least collect it.

If you don’t have a data system, no worries. There’s a lot you can do with video, and even just with a stopwatch. Overall lap times are a must to collect (but not get overly focused on while driving), but remember that it’s very possible to make an improvement in an area of your driving that doesn’t show up in your lap times. You could improve a technique or specific corner, and yet track conditions have deteriorated, or you made a mistake somewhere else that cancels out the improvement in lap time.

This is why you need to use segment times. I prefer to set up a segment from just before the braking point for a corner to just before the braking point for the next corner, comparing the time to travel this segment, lap-to-lap. With a data system, this is easy (again, figure it out and be prepared before doing to your test day). Without data, you’re going to have to rely on a person with a stopwatch (and often a person can’t see from the brake point for one corner to the next brake point, so they’ll just have to time as much of that as they can clearly and consistently see), or video.

With video, you can time segments with a stopwatch while replaying the recording. If you’re trying a couple of different approaches to a corner, for example, plan it and give a signal to the video camera by showing one or two fingers (indicating which option you’re using).

When you decide to try different approaches to a specific corner, make sure you give each option a fair chance to prove which is faster. If you drive one option for just two laps, it likely that you haven’t actually performed it well. Instead, drive each option enough times to make sure you’ve performed both as best you can.

It’s critical that you keep an open mind throughout your test day. The worst thing you can do is try something that you’ve already made your mind up about whether it will work or not. If you don’t think it will, you’re right.

Test days take discipline. It’s easy to get caught up in just turning laps, getting seat time for the sake of seat time, pounding around lap after lap, but not learning any more. Stick to the script (plan). It’s also easy to get overly focused on lap times.

Huh? “I thought lap times were what’s it’s all about?” you ask. Yes, ultimately that’s the metric when focusing improving your speed, but it’s not everything. Being able to consistently turn fast laps, even if the one fastest is not as good, usually wins more races. Being able to drive fast laps comfortably is also important, as is doing so without abusing your car.

More importantly, you will rarely turn your fastest lap when you’re focused entirely on your lap times.

Next time, I’ll focus on car development, not as an engineer (that’s not me), but from the perspective of using a test day from a strategic perspective.

For more information about Ross’s tips, coaching, eCourses, newsletter, Virtual Track Walk videos and other resources to help you drive at your best, go to www.SpeedSecrets.com

Free eBook: How to Learn a Track… Fast!