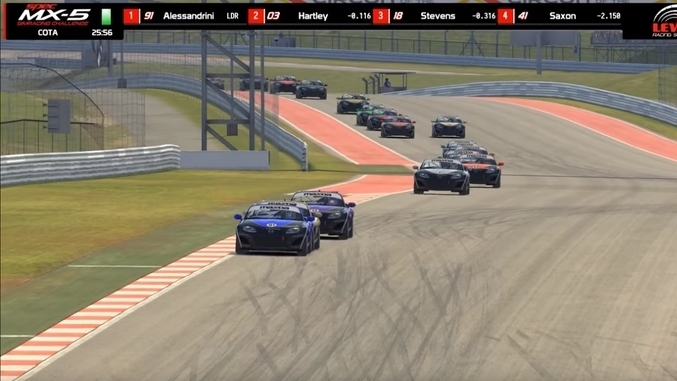 A heartbreaker in Texas. After fighting his way from 4th to 1st, Talmo, Georgia’s Jesse Stevens’ money-shift on the last lap of race 1 cost him a win and gifted the victory to current points leader DJ Alessandrini. Stevens limped across the line belching oily smoke to finish P12.

The battle for 2nd between Robert Hartley and Nathan Saxon was tough but fair and both drivers proved once again why they are regular contenders for a podium at any time. But after 8 laps of the 3.4 mile Circuit of the Americas it was Saxon that took 2nd from Hartley by a scant 1.3 seconds, followed by Paul Darling and Jonathan Dekuysscher in 5th.

The evening’s second race was once again led by the familiar trio of DJ, Hartley and Stevens with Nathan Saxon in 4th and an inspired Dakota Dickerson holding down 5th. A second pack of cars consisting of Thomas Bressi, Steve Ficacci and Summit Point race winner Chris Henn were busy with their own tight race for off-podium points.

With less than half of the 30-minute race completed, Jesse Stevens got around Hartley for the lead, and was in full-defensive mode for the rest of the race to keep Hartley’s beige 03 car in his mirrors. Not content with 5th Dickerson and Saxon traded positions and paint and on the last lap they came together in a ‘racing incident’ that allowed Dickerson to slide into 4th place – his best finish this season.

After 12 laps, a relieved Jesse Stevens crossed the line a mere 0.3 seconds in front of Robert Hartley with DJ in 3rd but playing it smart and picking up an additional championship point his low incident count.

Speaking of penalties, the Race Steward was kept busy with no less than 6 competitors receiving drive through penalties for a variety of on-track infractions; on the plus side, 13 drivers scored valuable bonus points for their consistent and clean driving.

For the current championship standings go to https://specmx-5.com/simracing-challenge-point-standings/

Our next event is at the recently rebranded WeatherTech Laguna Seca track on 5.22 at 8:30 PM EST.