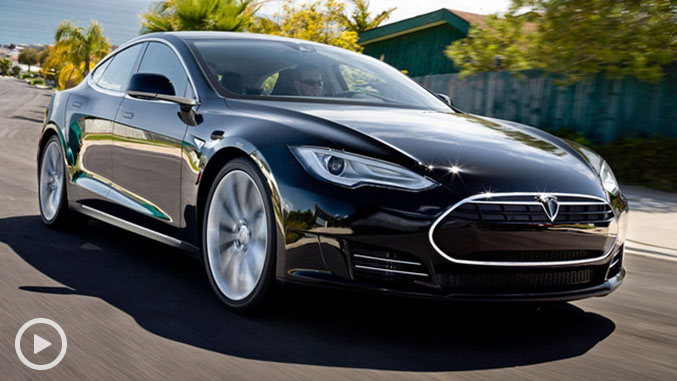 During the first day of the MPG Track Days event, Tesla took the opportunity to introduce journalists who hadn’t had any previous seat time in the Model S a chance to give it a brief spin around Pasadena. Of course we jumped at the chance to hop into the driver’s seat of the sport sedan, here outfitted with the P85 high performance package.
While we were slightly disappointed to discover that the vehicle on hand was not of the dual motor, all-wheel-drive persuasion that Tesla recently revealed, nor did it offer the Autopilot features showcased when the P85D debuted, this is still a multi-award winning all-electric sports sedan from an auto manufacturer that many believe to be the next (or current, depending on who you talk to) tech industry juggernaut, so interest remained high.

Our resident Tesla rep told us that the Autopilot features could be retroactively rolled out to current and older Model S vehicles via a software update, but we’re still a bit skeptical that the scope of the Autopilot features showcased last month ago could be fitted to older Tesla vehicles sheerly through software revisions. Time will tell, we suppose.
The Model S features an adjustable air suspension that works similarly to more traditional adaptive damping systems in that it adjusts suspension stiffness constantly based on real-time factors like road conditions, speed, how the car is being driven, and so on. During our short drive route we noted that the suspension felt compliant without wandering into wayward body roll territory, and the steering offered a reasonably sporty feel. The entire package feels modeled closely after the large German sport sedans like the BMW 7-Series and the Mercedes-Benz S-Class, and interior feel and quality is very much on par with them.

We found ourselves enamored with the 12.3 inch LCD touchscreen on the center stack, a piece which truly dominates the interior’s minimalist layout. Visually and functionally, this system is simply worlds away from typical passenger car infotainment systems, but we were surprised to learn that its connection to the Internet is still made via 3G, and plans to move to LTE are apparently still too far off to provide a timeframe for its implementation.
Dipping into the throttle is where the merits of the Model S’s all-electric drivetrain truly make themselves known. Without a traditional gearbox and no revs to build, torque is on tap in full song the instant you stomp on the throttle, with no pauses for gear changes or dips in pull along the power band. It is truly enthralling, though its delivery is so drama-free that it has a strangely eerie effect for the uninitiated. Let’s take it out on the road:

Have you subscribed to the Winding Road Magazine YouTube channel yet? We post new videos like these every week, so give us a click if you want to make sure you don’t miss any of the latest clips.

Update: 2015 Audi R8 V10 Competition is the Most Powerful Car in Company’s History