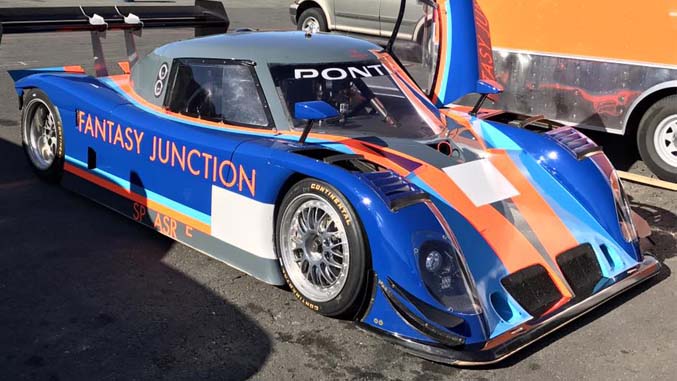 Mark Drennan drives for Winding Road Racing and leads our driver coaching program. Mark is the 2016 Battery Tender Global Mazda MX-5 Cup rookie-of-the-year. Mark is also a two-time NASA national champion in Spec Miata and national champion in Spec E46. He has an extensive list of wins in SCCA Spec Miata as well. Mark was a pioneer of the simulator-to-real-world path to road racing success. Mark will be driving the Fantasy Junction with Winding Road Racing Riley Daytona Prototype at the 2016 25 Hours of Thunderhill. Migliore Motorsports will be in charge of the car, with Migliore head man Nico Castellaccio leading the engineering and crew. He will be joined by Car Chief Abel Jimenez from Matador Motorsports, Dennis Chizma, Loren Burgess and Bill Margraf. Castellaccio is a veteran of endurance racing and has 25 Hours of Thunderhill wins in 2009, 2010 and 2011. He also won the 24 Hours of Le Mans in 2003 and 2004, the 24 Hours of Daytona in 2001 and the 12 Hours of Sebring in 2005.

We recently sat down with Winding Road Racing driver Mark Drennan after his first test day in the Daytona Prototype that he’ll drive in the 25 Hours this year. While the test was at Sonoma Raceway, we wanted to capture his thoughts on the car while they were fresh, considering how different this car is from an MX-5 Cup car or a Spec Miata: big power, aero, mid-engine, pure racing chassis. Here’s what Mark said:

"Sitting in the ’06 Riley Daytona Prototype car for the first time, the thing you notice is the 100% race car cockpit.  With a single seat, offset but still central, it feels like climbing into a fighter jet.  That feeling is reinforced because there are so many switches. The crazy thing is that it all looked familiar because it’s the exact layout in iRacing’s Riley Daytona Prototype that I drove a ton back in the early days of iRacing.  The DP was the highest level car available, so that’s what I focused on.

"The seating position is fairly upright,  and there is power steering w/ 5 settings, which I was hoping would lead to good comfort and visibility. Sway bar levers and a brake bias knob offer more driver control than I’m used to in production-based cars. My thoughts of comfort were reduced a bit when I realized there is no cool suit,  but only helmet A/C blower with 3 settings. And the cockpit temps are around 125 degrees F.  Yikes! I’d better ask for night stints.
"Then it came time for me to try this thing on track. Rolling out, the first thing I noticed is the race clutch and long first gear. Then I glanced in the the tiny side mirrors. They could be interesting in a 25 Hour race, but really the E2- and E3-class cars have the mirror issue not ESR. I hope!
"Driving through the pits, of course we have power controlled by a pit speed limit button, which is useful because the car is slightly difficult to drive slowly. I rolled carefully up the T1 hill and around T2. Then I thought ‘enough of this’, straightened the wheel and gave it some gas. That, of course, immediately spun the tires in first gear and pushed me hard towards T3.  Steady Mark, remain calm…
"The DP has a sequential gearbox with no-lift upshift and clutch/throttle-blip downshifts. That’s great for ease of use, but there are many, many gear changes!  The acceleration is so brisk that you barely spend time in each of the 6 gears.  And unlike most production-based race cars, the DP has a usable first gear.  For example, this means needing to get 5 downshifts done in a short amount of time approaching the Turn 7 hairpin from the back straight.  That’s 2 or 3 or 4 more downshifts  than with our other cars.

"Once I had the tires warm, I let her rip. WOW! Weighing 2400 pounds with over 600HP and nearly 600 ft lb of torque, the car is stupid fast.  When you mash the gas pedal (after you’ve straightened out the steering wheel), the acceleration pins you back into the seat, which for me, triggered an instant and lasting ‘O face’.
"Compared to the production-based sports cars I’ve driven (Spec Miata, MX-5 Cup, SpecE46, Spec Mustang), the DP is a much more solid, stable, and robust platform that’s so low it’s practically scraping the ground.  With what feels like zero body roll, the car turns in immediately, requiring a higher level of precision compared to the production cars I’ve driven.
"Because the car is a completely different animal, it changed how I drove the track.  Racing lines and turn in points were mostly the same, however.  But because the car is so low, touching apex/entry curbing was a no-no and it revealed bumps and dips in the track I never knew existed and had to plan for.  With great power comes greatly responsibility – especially in the DP when it comes to braking and throttle pickup points.  The high speeds require moving braking points back significantly while the high horsepower requires patience and restraint to smoothly roll-on throttle as you exit corners and unwind the wheel.
"Because of the increased g’s in every direction (acceleration, deceleration, cornering), I was expecting a more “violent” experience compared to my Spec Miata or SpecE46.  I thought it would be kind of like going to a shifter kart from a TaG kart.  However, the closed cockpit, snug seat, power steering, and robust nature of the platform made it physically very easy to drive.  The sorest parts of my body were my “cheeks” – the lower ones from so much clenching and the uppers ones from the huge grin stuck on my face!
"With plenty left in the car, here are my Sonoma performance numbers after two sessions in the Daytona Prototype compared to my track record times in Spec Miata, SpecE46, and Spec Mustang:
"My initial verdict is that the #15 Fantasy Junction with Winding Road Racing Daytona Prototype is a potent and fun package.  We can certainly contend for the overall win at this year’s 25 Hours of Thunderhill. Of course, as in all endurance racing, reliability and teamwork will be key."
Support Mark and the team with exclusive Winding Road Racing Thunderhill team gear.
Watch/listen to coverage of the race:
Audio/video: https://livestream.com/accounts/1798361/25hoursofthunderhill-race
Live timing on race hero.io: https://racehero.io/orgs/nasa-norcal
Tags:
Daytona Prototyperacingspec miata

“The Big Engine That Could” Mini-Series: Episode 7