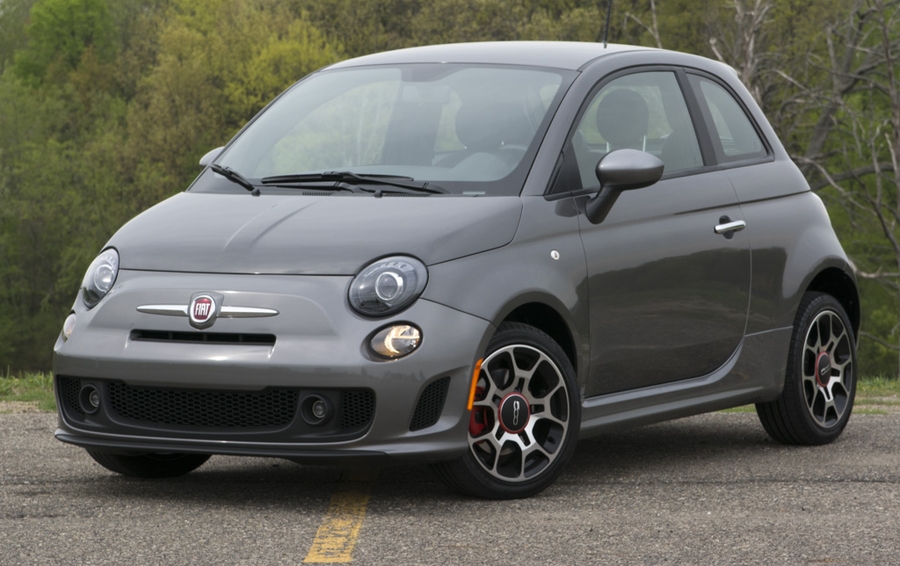 “Is this a detuned Abarth, or an upgraded 500?” That was the main question on our minds when we slipped into the Fiat 500 Turbo’s well-tailored cabin. On the one hand, the 500T features its own, more interesting bodywork. It’s not quite as assertive as the Abarth’s body treatment, but with its sportier front valence, rear diffuser, and single chrome-tipped exhaust pipe it’s decidedly more assertive than the cutesy 500.
The case for this being a detuned Abarth is more evident when you look at the powertrain. The 500T packs the same 1.4-liter, turbocharged, MultiAir four-cylinder found in the Abarth. Unlike the bescorpioned car, though, the 500T’s output is down from 160 horsepower and 170 pound-feet of torque to 135 horsepower and 150 pound-feet of torque. Meanwhile, the single-sided exhaust with an honest-to-Karl muffler means the turbocharged 500 just doesn’t have that same, wonderful exhaust bark that’s found on the Abarth.
[Click here to read our review of the 2012 Fiat 500C]
Further damning for those looking for a decaf Abarth is the decidedly non-sporting interior. With the exception of the shift knob (which is a borrowed item from the Abarth), the 500T’s cabin is identical to the 100-horsepower 500 Sport. There’s no sporty seats or flat-bottomed steering wheel—there isn’t even a boost gauge.
You’ll be forgiven at this point for thinking the little 500T is a bit misguided or confused. It isn’t. Get it out on the road, and you’ll discover that Fiat has struck the perfect blend with the turbocharged 500. It isn’t an Abarth for the speed-averse—it’s a 500 for the speed freak.
This is the car for those that can’t live with just 100 horsepower, but are still wildly in love with the 500 as a whole. Ride, handling, driving experience, and everyday livability are all the same as a 500 Sport, but the inclusion of the extra power and torque is just enough to feel normal to people that have never driven a car this small before.
And that extra power is easy to exploit. The 500T is quite willing to rev, and there’s not a great deal of turbo lag. This car will never sound as wonderful as the muffler-less Abarth, but it sounds plenty fine in its own right. There’s decided traces of the standard exhaust note, only it’s deeper, a bit throatier, and still mightily enjoyable for a small car.
There are a few small issues, though. See, we unfortunately live in America, where people don’t buy many manual transmissions. The 500T is only available with a five-speed stick, which is a huge mistake when it comes to market appeal. The other issue is that the wool is being pulled over our eyes with this car.
See, the 500 Abarth in Europe starts with this powertrain setup. You get the seats, steering wheel, suspension, wheels/tires, exterior styling, and everything else from the 160-horsepower Abarth, but you start with 135 ponies and 150 pound-feet of torque. You then have the option of adding an EsseEsse (SS) kit, which brings the car up to American levels. The European car is also available with an automatic.
So, if you want a true, detuned but not de-contented Abarth, you’ll need to go to Europe. If you just want a slightly quicker 500, though, then this turbocharged model should be just your flavor.
2013 Fiat 500 Turbo
Engine: Turbocharged inline-four, 1.4 liters, 16v
Output: 135 hp/150 lb-ft
0-60 MPH: 8.0 sec (est)
Weight: 2501 lb
Fuel Economy, City/Hwy: 28/34 mpg
Base Price: $19,500
As Tested: $22,350
Tags:
fiatFiat 500

Recap: The Images Of The 2013 Mille Miglia