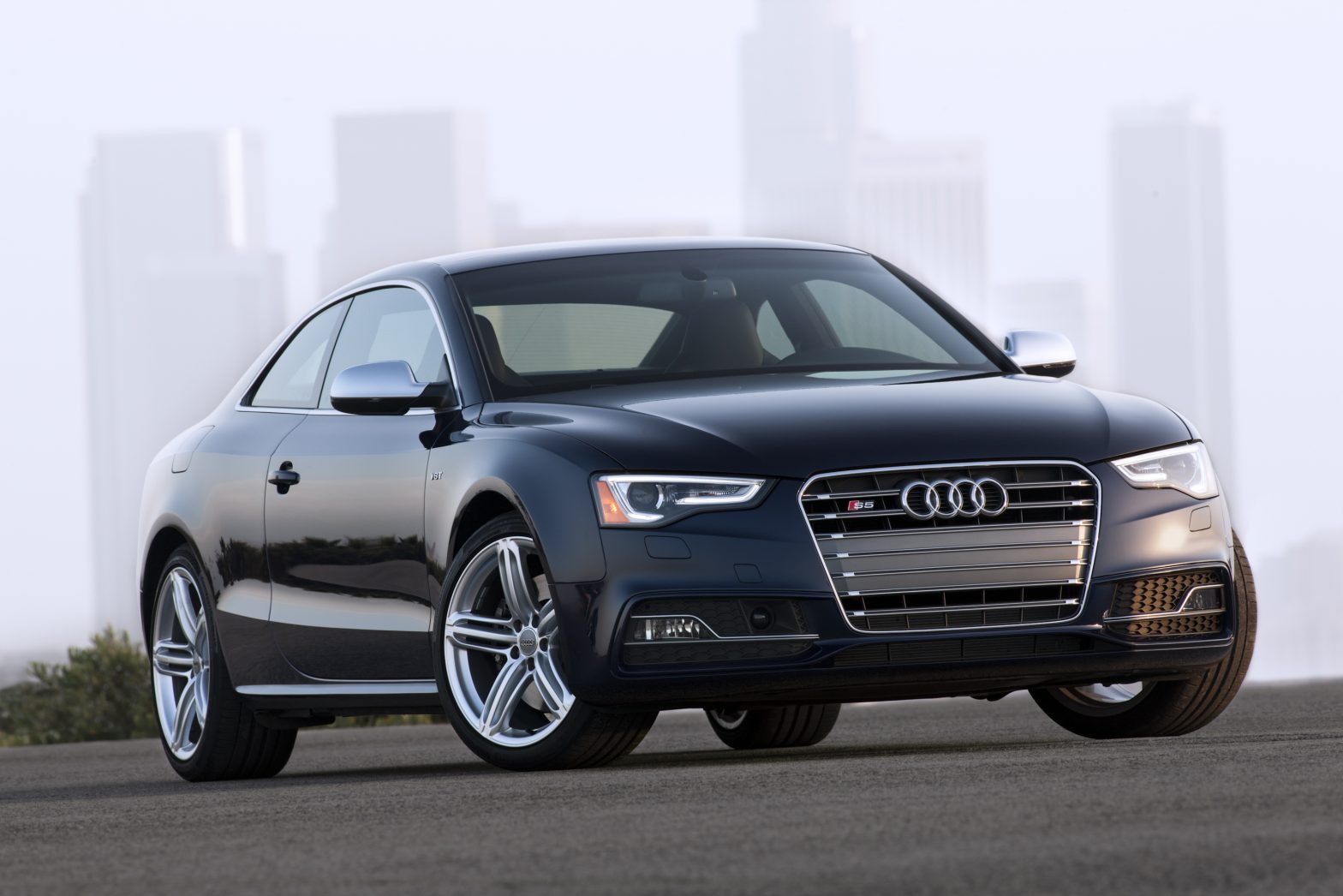 Audi’s original S5 was powered by the less-brutish version of Audi’s 4.2-liter V-8. That engine produced 420 horsepower in the R8 and B7 RS4, but it was detuned to 354 ponies in the S5. Still, it was a charming engine, and one that felt natural in a sports coupe like the S5. For 2013, though, things changed.
Following the industry trend Audi has dropped the 4.2, in favor of a 3.0-liter, force-induced six-cylinder (borrowed from the S4 and S5 Cabriolet). This new engine is very nearly as powerful as the old 4.2, packing 333 horsepower, which represents a 21-horsepower drop over the V-8. Torque, meanwhile, rests at an identical 325 pound-feet. It’s available earlier in the rev range, though, coming in at 2900 rpm instead of 3500 rpm.
But where the 3.0-liter makes its case is the way it revs. Compared to the 4.2, the supercharged V-6 feels enthusiastic and full of vigor, climbing the tachometer without hesitation. The V-8 S5 felt more ponderous under hard throttle. That old engine also lacked the smooth, linear power delivery found on the supercharged mill.
There’s also an argument to be made for the new engine’s sound. For reasons that we don’t quite understand, the S5’s V-8 never sounded quite as sweet or sonorous as the more potent variations found on the R8 and RS4. It was dull and generic.  This 3.0-liter, though, sounds like few other cars on the road. It delivers a sweet howl that sounds good both inside and outside of the car. Thanks to Audi’s Drive Select system, the driver even has the option of turning the engine noise down a smidge. We refused, on principle, to do such a thing.
Perhaps our only complaint about the noise made by the V-6-powered S5 was the supercharger whine. There just wasn’t enough of it. Auto manufacturers, take note: much like bacon and cowbell, you can never have too much supercharger whine. Go listen to a modified R53 Mini Cooper S to see what we mean.
During the swap from the eight-cylinder to the six-pot, Audi did some work on the manual transmission. The V-8’s six-speed stick was notchier, with gates that felt rubbery and difficult to find. This gearbox is much improved, with a more satisfying action in the shifter and gates that are easier to locate. It’s that rare kind of manual gearbox that really encourages shifting around through the gears, with a satisfying feel accompanying each flick of the gear lever.
Swapping out the 4.2-liter from the S5 was not a decision we originally agreed with, even after sampling the 3.0-liter in the S4. The character of this coupe, we felt, demanded a V-8, and anything less would take away from its subtle grand touring qualities. We were wrong. The 3.0-liter feels like such a natural fit in this application. The S5 has retained its GT traits with the smooth, readily available power of this engine, while the quick-revving nature and much-improved gearbox have added an even larger dose of sportiness to the overall formula. We approve.
2013 Audi S5 Prestige 6MT
Engine: Supercharged V-6, 3.0 liters, 24v
Output: 333 hp/325 lb-ft
0-60 MPH: 4.9 sec
Top Speed: 155 mph
Weight: 3858 lb
Fuel Economy, City/Hwy: 17/26 mpg
Base Price: $57,550
Tags:
2013 audi s5 coupe review2013 audi s5 driving2013 audi s5 images2013 audi s5 photos2013 audi s5 review2013 audi s5 specs2013 audi s5 videoAudi S5CabrioletdriverR8USD