The VR Headset Difference In iRacing: Must Have Or Nice To Have? 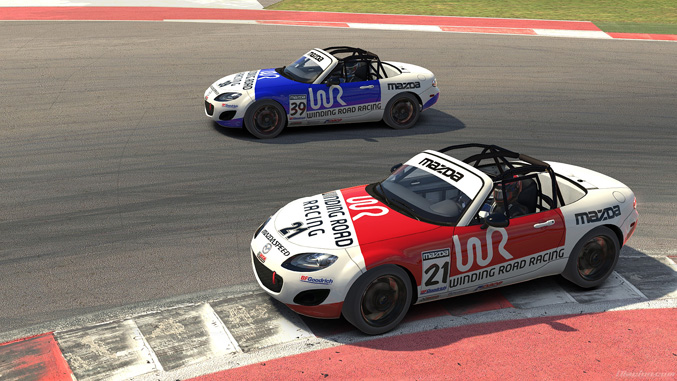 Most people in the iRacing community like to make the distinction between racing games like Forza and "simulations" like iRacing. "I don't play video games like a child, I race a simulator." Yes, this might be partially down to a need to feel grown up when spending hours in front of a computer screen making vroom-vroom noises. And, I will admit, iRacing is miles more realistic and useful than any other racing game I've played. But perhaps the real reason iRacing shouldn't be called a game is that it isn't actually fun. No pain, no gain, right?

For people who, like me, race real cars regularly, (but aren't high-end pros with access to fancy team sims), iRacing is an important tool for getting a cheap facsimile of seat time. It keeps the skills sharp during the off-season and provides a leg up when heading to a new track. But fun? No. If we wanted to have fun we would play Forza or Grand Theft Auto. Because iRacing is really hard. Imagine if I took your car, strapped some remote-control servos to it, fed you live video from the driver's seat and then asked you to drive it remotely from a crappy old Logitec wheel. That might seem like a great simulation, but your car would be destroyed almost immediately because 75% of the sensory input that you normally use to drive a car would be gone. iRacing does a pretty impressive job of achieving that level of realism, but that means the learning curve is very steep and most new users find it difficult to even complete a single lap without ending up in the wall.

There are two sensory inputs that are missing from the typical simulator setup. The first is obvious: acceleration. This one is obviously pretty much impossible to achieve on a sim because, well, you aren't moving and acceleration by definition involves motion. In my limited experience, so-called motion rigs that give you some pitch, roll, and yaw are as much a distraction as they are a help (and, by the way, they cost as much as a season of real racing). The second missing input is the ability to sense speed. Most humans, if thrown into a car on a track, can pretty quickly learn to pick a braking point through instinct. This is basically accomplished by watching how fast the scenery is passing by and, from experience, knowing roughly how much grip is out there. But take me, a 5+ year user of iRacing and I can't find a reasonable braking point to save my life. Even triple-monitor rigs, which theoretically give much more peripheral vision and depth perception, don't provide that much improvement if your point of comparison is driving a real car.

However, I recently found out that speed sensing and depth perception can be vastly improved on a simulator by using a VR headset. It's difficult to describe how much of a revelation VR is to someone who has never tried it, but the best way I can explain it uses an example from outside of the racing world: there is a simple VR game in which you stand on the edge of a cliff and just jump off. You know you're just standing in your living room and that stepping forward will, at worst, lead to stubbing a toe on the coffee table, but it is legitimately scary, looking at the virtual death plunge ahead, to take that step forward.

The racing version of that dramatic VR sense of reality takes a barely-fun simulation like iRacing and makes it fun. When I first set up my Oculus Rift, I could not stop smiling. I jumped in an F3 car and ran a series of clean, quick laps around CoTA right off the bat and it was legitimately enjoyable. It was easy to judge speed, so I felt comfortable pushing the limits without the same risk of a massive crash (and the accompanying "looks like your car is toast"). Fantastic!

Of course, as with anything in racing, equipment is no substitute for skill, so I still have no idea how the "aliens" of the iRacing world are capable of laps 5-10 seconds faster than me. I guess, now that actually I enjoy it, I'll get some more virtual seat time and catch up to those guys.

Tom Martin III is a racing driver and engineer. He currently runs in the Spec MX-5 Challenge, West Region. In 2018, he was the Central Region champion in Spec MX-5 Challenge and finished 2nd in the national championship. He is also a Top 10 season finisher in Global MX-5 Cup and previous winner of the 25 Hours of Thunderhill and Targa Newfoundland.