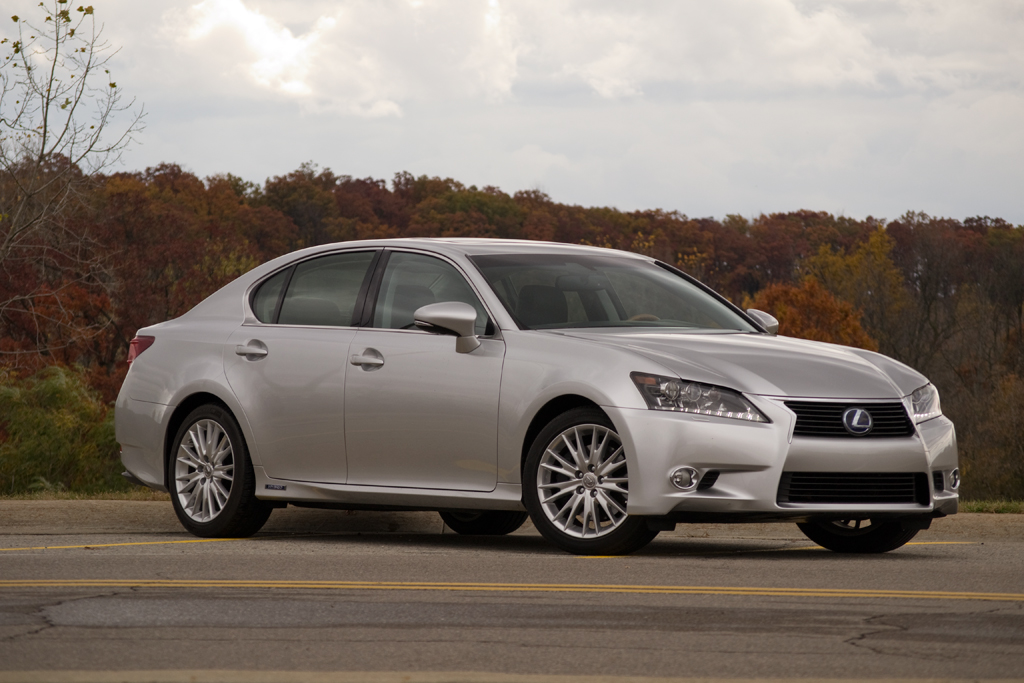 —Lake Orion, Michigan
Your options are rather limited if you are looking for a full-size luxury hybrid with four doors. There’s the BMW 5-Series ActiveHybrid, but with an EPA-estimated 23 miles per gallon in the city and 30 on the highway, it’s not the most fuel-sipping option. The Infiniti M Hybrid is the speed-demon’s choice, with its 360-horsepower setup, but it falls short in terms of fuel economy, as well. No, if sipping fuel is most important, followed by good lucks and performance, then you want the very good Lexus GS450h. With an EPA-estimated 29 mpg in the city and 34 on the highway, it handily bests the BMW, Infiniti, and the rest of the luxury market.
The GS isn’t exactly slow either. It’s a tenth of a second faster to 60 than the BMW, but falls slightly behind the more powerful M. Still, that’s not bad company to be in.
This performance is all thanks to Toyota’s Hybrid Synergy Drive system. With a 3.5-liter V-6 under hood, an electric motor and a battery pack, the GS delivers 338 system horsepower, meaning it’s the most powerful GS you can get. Mated to a continuously variable transmission, it’s not the best sounding powertrain we’ve ever heard. The V-6 sounds strained at higher rpm, and not at all as smooth as the acceleration being exhibited. This is made worse by the A-pillar membrane that channels induction noise into the cabin. It just doesn’t sound quite right, and the addition of intake noise doesn’t help things along.
As we said, though, acceleration is quite potent. The combination of the instant-on torque of the electric motor with the general punch of the V-6 (286 horsepower and 254 pound-feet of torque on its own) means acceleration feels effortless. Really, it’s an intoxicating way to drive. Slotted into Sport, things are sharpened up just enough to make the GS a compelling drag strip star. The quicker throttle response feels good and teams well with the zero-rpm torque of the electric motor.
The ride is a bit on the soft side. Really, we’re waiting for a GS F-Sport hybrid to come along and set our hearts alight. It’s not that the standard suspension in both the GS350 and 450h is bad, but it just really pales in comparison to the balance of sportiness, feedback, and comfort found in the F-Sport.
If you care about interior style, then the hybrid model is the very best GS you can get. Our tester featured black leather seats that contrasted beautifully with the bamboo trim on the three-spoke steering wheel, center console, and dash. If we had our way, this trim combo would be available in every car on sale. It looks that good.
As we’ve said, the GS model has impressed since the first turn of the wheel. This is the second generation for the GS hybrid, and except for the BMW we mentioned earlier, it remains unchallenged. Perhaps there’s a reason for that. The combination of power, economy, and style it offers is really unmatched in this segment. Now, can we just get an F-Sport version?
2013 Lexus GS450h
Engine: V-6/electric motor, 3.5 liters, 24v
Output: 338 hp/254 lb-ft
0-60 MPH: 5.6 sec
Fuel Economy, City/Hwy: 29/34 mpg
Base Price: $58,950