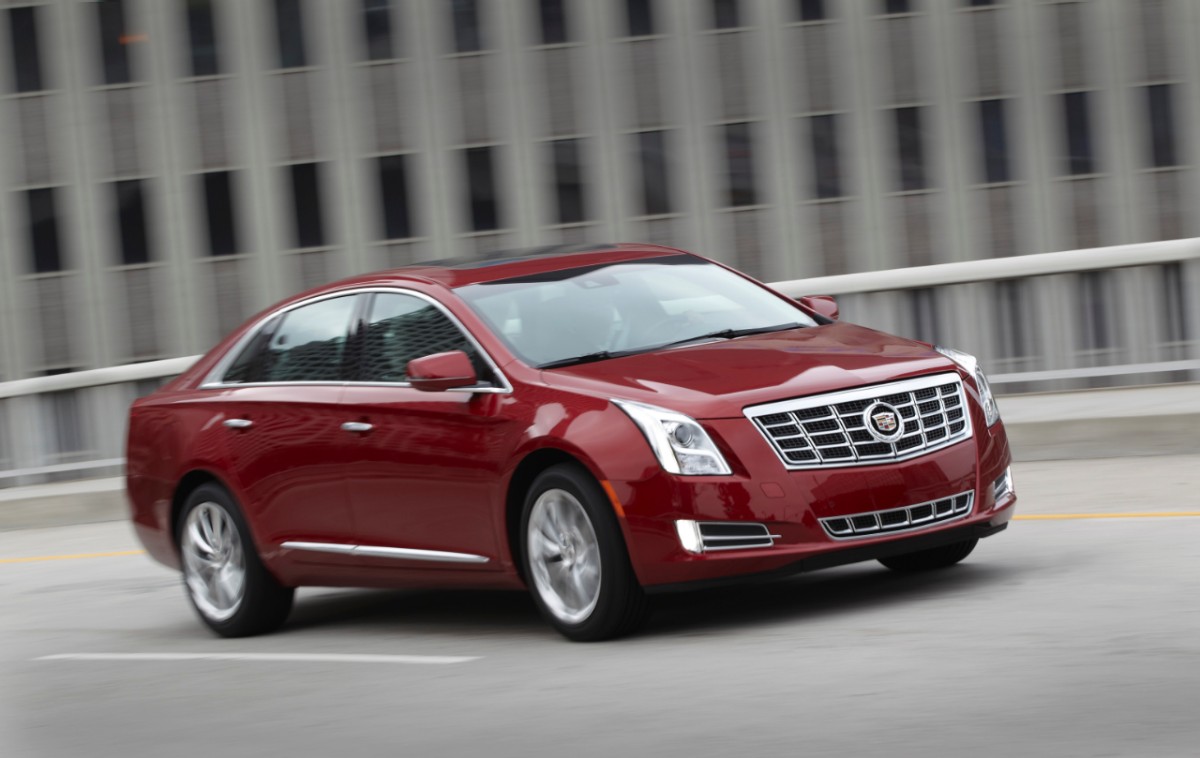 —Dexter, Michigan
Cadillac has been producing some really fantastic sedans as of late. We’ve been fans of the CTS (particularly the monstrous V-badged version) for some time now. Recently, we fell head-over-heels in love with the brand’s new compact sedan, the ATS. Now, Cadillac has seen fit to toss us the key fob to its large XTS, and let us draw our own conclusions. We can tell you, without giving too much away in the first paragraph, that this car really honors the marque’s new tradition of thoroughly enjoyable, thoroughly American luxury sedans.
Its looks definitely showcase the unique DNA that makes Cadillacs stand out from all other cars on the road. The prominent grille, high beltline, and sleek greenhouse atop a chunky, angular body are easily recognizable. It looks strong and muscular, but still athletic despite its visible bulk. It is handsome, inviting, and uniquely appealing.
[Click here to read our review of the 2013 Lincoln MKS EcoBoost]
The interior of our Platinum Collection model was downright sultry. It featured lots of soft, firm leather, a sparing amount of high-quality soft-touch plastic, elegant wood grain, and glossy piano black surfaces. The big leather chairs felt like thrones, and were easy to adjust via the power controls. Above us was a giant panoramic sunroof. At night, the ambient lighting softly illuminates the interior, giving it the feel of a private lounge in a luxury hotel. We definitely wouldn’t mind bringing a date to dinner in this class act. The only drawbacks we found were in the front and rear visibility, which suffered due to the smallish windows.

The digital instrument display reminded us of that in the Jaguar XJ, but this combined all the wonderful functionality of Cadillac’s new CUE technology interface. On the center stack was the touchscreen display, with the backlit audio and HVAC controls below it. When using the touchscreen or the other controls on the stack, inputs are met with a haptic pulse that gives the system a useful tactility that would otherwise be absent on the smooth surfaces.
And the XTS isn’t just nice to behold and to sit in. It’s also pretty enjoyable to drive. Its direct-injection V-6 offers 304 horsepower and 264 pound-feet of torque, which feels just about right in this 4200-pound, all-wheel-drive sedan. It’s plenty of power to make the car get up and go, but there really isn’t an excess of thrust with which to get carried away (and drain the fuel tank unnecessarily). It accelerates smoothly, as a good V-6 should, and it is easy to modulate the power, keeping occupants from being disturbed by big shifts in velocity.
The six-speed automatic transmission features a manual mode, with paddles mounted on the back of the steering wheel. It’s actually a joy to use the XTS in do-it-yourself mode, as the transmission is notably obedient and a lot less fussy than many of the manual modes we’ve sampled. It’s definitely worth including on the XTS, as it is done refreshingly correctly. Shifts come quickly, and the computer doesn’t try to override your inputs with its own logic.
The steering in the XTS is very light, but also sharply responsive. Dial in just a couple degrees of steering angle, and the car reacts quickly and nimbly. It feels a bit artificial about town, but at higher speeds, it makes tracking a straight line or carving a curvy road a natural and rewarding experience. The XTS feels very composed in the corners, too. We found we were able to carry a lot of speed around the bends without being tossed about the cabin at all. The suspension responds well to these lateral forces, and does a good job of shrouding their effects on the humans inside.

The ride has a nice luxury feel to it, as well. It’s fairly isolated, protecting the cabin from the jostling that occurs over bumps both large and small. With our tester’s big 20-inch wheels and corresponding rubber, we could hear some of the pings from the irregularities in the road making their way from the tires to our ears. Still, the cabin was mostly quiet, with very little tire roar or wind noise to speak of. We’d feel confident bringing along some of the fussier and more delicate passengers we know for a long, comfortable ride in the XTS.
Our full-fat model, with its special Crystal Red Tincoat exterior paint, costs $62,300 including delivery. With all that includes, and considering the fact we found ourselves mentally comparing this car to Audi’s A8 and Jaguar’s XJ, we consider that a fairly reasonable price tag.
2013 Cadillac XTS AWD Platinum
Engine: V-6, 3.6 liters, 24v
Output: 304 hp/264 lb-ft
0-60 MPH: 7.0 sec (est)
Weight: 4215 lb
Fuel Economy: 17/26 mpg
Base Price: $61,305
Tags:
CTSJaguar XJXTs