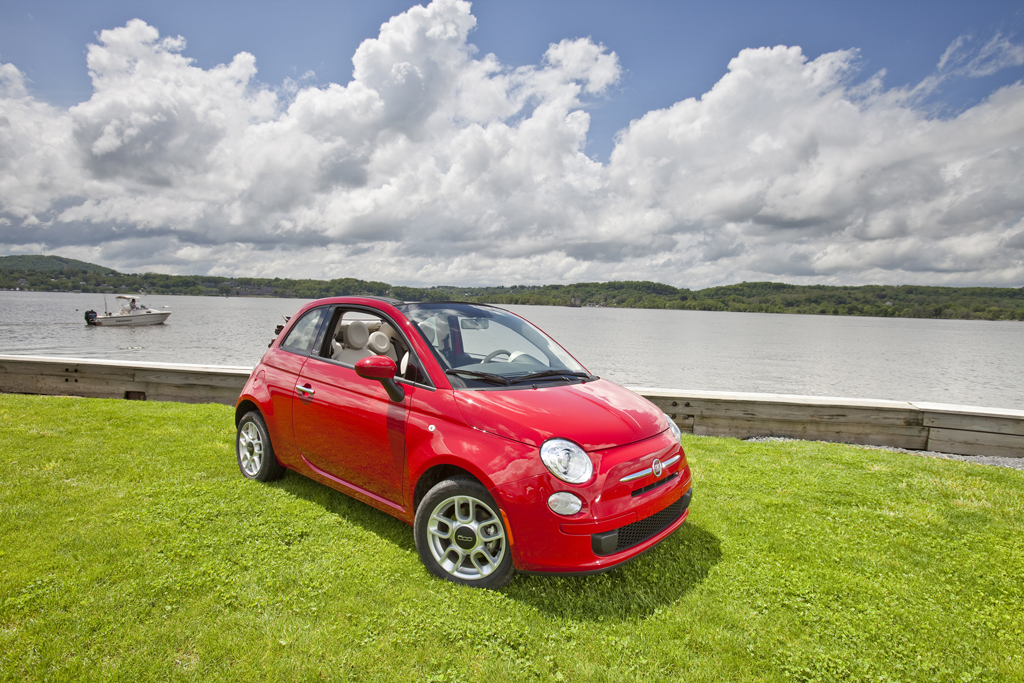 I attended the launch of the 500C almost a year ago in New York City, and spent a fair bit of time with it during our recent week loan. To be frank, I’m still not sold on Fiat’s convertible solution, and I’m still not overly pleased that the Sport package isn’t available on the “droptop” 500.
Regardless of history or tradition, this is not a convertible in the classic sense. It’s more of a targa top. Now, there’s nothing really wrong with that, but it shouldn’t be sold and marketed as a convertible. Call it a 500T. Don’t get my hopes up and then crush them via a glorified cloth sunroof.
I spent as much time as I could with the top down and just never found that sense of freedom that comes with proper open-air motoring. There are benefits to this setup though. The 500C is quieter without any real cowl shake, unlike its closest competitor, the Mini Cooper Convertible. The ability to raise and lower the roof at near-freeway speeds is also quite nice.
Perhaps my biggest issue with the 500C is price. The base Pop convertible can be had for $20,200 out the door. With that money, I can snag the far-better-to-drive 500 Sport with a sunroof that, to front-seat occupants, reveals nearly as much sky as the droptop. That hardtop 500 will also have heated seats (a standard option on the base 500C) and navigation. It’s also $150 cheaper.
I want to like the 500C, but its open-top experience just isn’t different enough from a sunroof-equipped 500 to justify the extra expense and lack of dynamic ability.
—Brandon Turkus, Online Editor
I really enjoyed cruising around in this car. I don’t really mind that it’s not a true convertible. Just being able to peel back the lid of this car like a sardine can feels pretty special, lets in a lot of light and air, but doesn’t leave one feeling totally exposed. You can also just open it partway if you want. It’s nice to not be totally blasted with rushing wind while driving. Plus, it makes it easier to carry on a conversation with passengers, if you’re into that sort of thing.
I also think the soft top looks cool. The Fiat 500 is already unique as it is, and adding that bit of canvas completes the car’s too-cool-for-school vibe. It’s funky, perky, and I like it.
One thing to mention regarding the 500—convertible or not—is that the rear seats are surprisingly usable. I would never subject an adult to the back seat of a Mini Cooper, but I have had friends (one at a time, mind you) in the 500’s second row a couple times, without much complaint. It’s tough to get back there, but once you’re in, it’s not so bad.
I must agree with Brandon, however, that the unavailability of the Sport package is a bit of a bummer. The 500 isn’t fast, so anything that can help it feel more sporting is a plus. The 500C doesn’t have it.
—John Beltz Snyder, Senior Editor
Pros
Quieter and more stable than its primary competition (Mini Cooper Convertible)
The roof can function at speed, and can be left partially closed if desired
Adds flair to an already unique styling
Cons
You can get nearly the same open-top experience for less money within the Fiat family
No Sport package available
Over $20,000 for a base model is a bit much
Tags:
fiatFiat 500Mini CooperNew York CityOnline