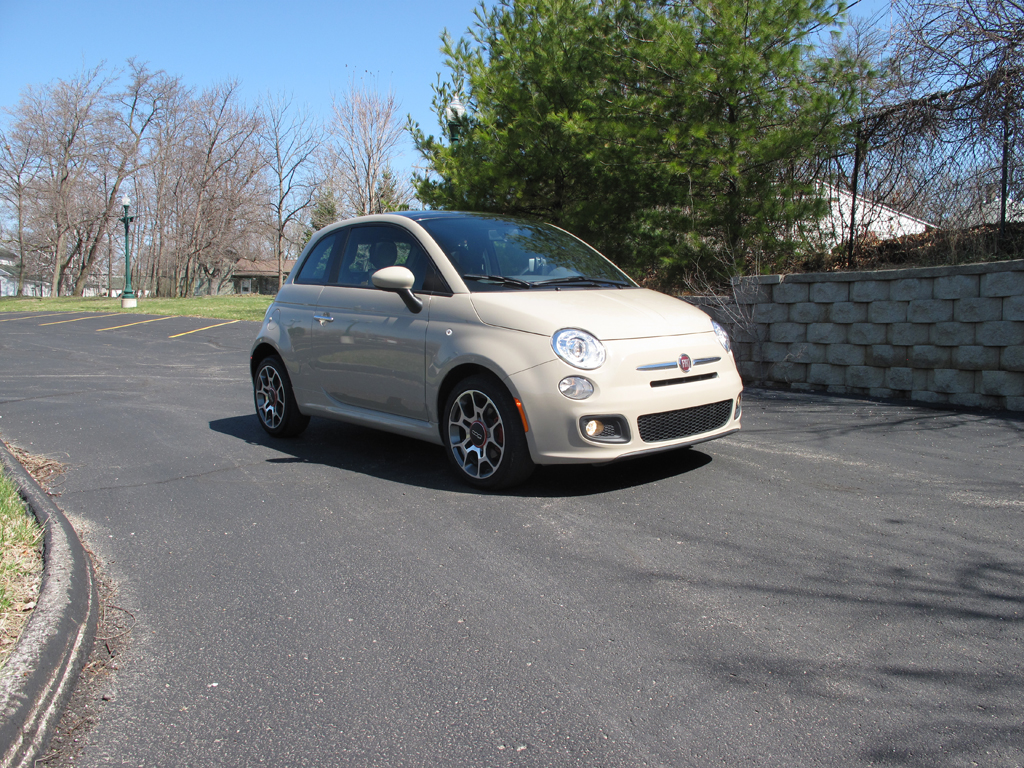 When I first drove Fiat’s new-for-Americans 500 coupe at the launch event, I only took one brief run in an automatic transmission-equipped example. Considering how much fun I had been having with the five-speed manual versions throughout the day, that didn’t seem like any big loss at the time.
Still, when this Sport trimmed 500 showed up at our office door, equipped with the six-speed automatic I knew there’d be a chance to dive deeper.
The simple first impression of the 6AT car was that it, frankly, didn’t distract much from that which makes the Fiat so much fun to drive; at least for right now. Before you write in to demand my resignation, hear me out.
For starters, the automatic gearbox isn’t a bad one, shifting appropriately up and down on its own most of the time, and quick-but-not-jarring when used via the “Auto Stick” lever. Considering that the five-speed manual isn’t a terrific gearbox as far as these things go, the “loss” in terms of enthusiastic driving for the auto isn’t as great as it might be.
It’s also important to note that the automatic gearbox doesn’t change the way the 500 looks at all. That sounds obvious, sure, but part of the fun (and no doubt a large part of the purchase decision for 500 early adopters) of driving the Fiat is that you do get noticed, waved at, honked at, and hollered about wherever you go in the car. Expect the 500 to garner a lot of attention, at least for the first few years on the market.
The big caveat here is that, as the newness fades and time wears on, I really do think that the manual car will hold up better as far as keeping the Fiat fun to drive. The higher level of connectivity with the driver should allow an owner to go on enjoying the car, long after the freshness of being the only Cinquecento on the block has worn off.
—Seyth Miersma, Editor-In-Chief
While Mini owners will always think theirs the superior vehicle (which, in terms of sporting driving dynamics, is true) the Fiat 500 isn’t as bad as these folks say. The Fiat, while driving like the smaller vehicle, actually has a good bit of room. If you have to stick a person in the rear seat of the 500, you can. I was able to comfortably pack two passengers and some bags into the car for a 20-minute drive across town. I got no complaints from anybody. I wouldn’t subject somebody to the back seat of a Mini Cooper for more than a couple blocks.
I have also heard Mini owners call the Fiat “ugly.” Pot, meet kettle. While I personally find neither car to be particularly unattractive nor beautiful, I think in a case like this, they’re both kind of weird, and looks are too subjective to call one fairer than the other.
I have also heard the 500 compared to the Smart Fortwo. And though the Fiat is larger (with a 90.6-inch wheelbase, compared to the Smart’s 73.5 inches), the driving style does seem to merit comparison. The Fiat feels really small in urban traffic, and feels more at home there, as does the smart. They share an upright seating position and good visibility. The only thing is that the Fiat’s transmission, as Seyth points out, isn’t a piece of crap.
—John Beltz Snyder, Production Editor
When the 500 arrived at our office, to say I was excited would have been a serious understatement. I was giddy. As a schoolboy. On the last day of school. Ever. I took it home the first evening, and drove the doors off of it. Took it all around town, showed my friends and family. Zipped in and out of traffic, receiving waves and smiles from the vehicles around me. I had an absolute ball with this little Italian.
The thing is, it took a trip to New York City to drive the 500 convertible, and another go around in the hardtop during our recent 500/Mini Cooper comparison to realize that I didn’t really like the little Fiat.
It all starts with the seats. They are squishy. Like old couch squishy. I found it difficult to get comfortable in them, although I think the fold down armrest was a nice feature. There needs to be more bolstering, especially on the butt of the seat.
The pedal box was also too small, making my knees constantly clank together and against the door and center stack through turns. The lack of telescopic steering was also an issue, as I was forced to sit closer to the wheel than I would have preferred. This amplified my lack of leg room. The ride was also higher than I would of liked, with my head sitting only slightly below the sunroof.
Despite these comfort issues (which I admit are highly variable based on the driver), there is no denying that the 500 is a genuinely wonderful car when it comes to driving dynamics. The autobox was always ready with a cog when needed, and the amount of steering feel was truly excellent. There was more body roll than I would have liked, and a bit more power would have been welcomed, but overall, the 500 is a genuinely comfortable car to chuck about. I can’t wait to drive the Abarth version.
—Brandon Turkus, Fleet Manager
Pros
Cons
Tags:
20122012 Fiat 500500500 SportCinquecentofiatFiat 500Mini Cooper