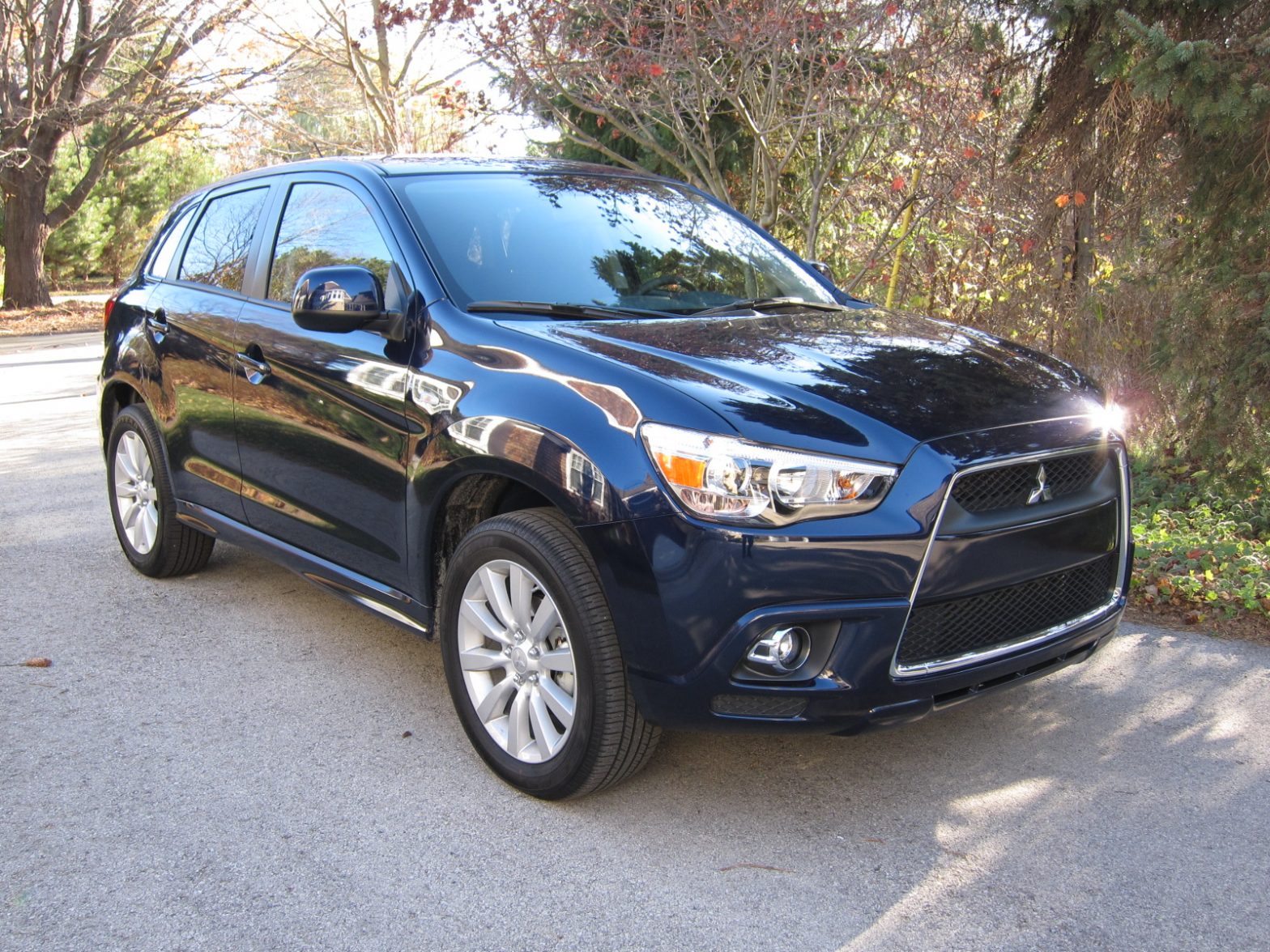 The Outlander Sport has real potential as the Greenformance Crossover of the Year. Or so it seems in the first few minutes behind the wheel.

Initially I was attracted by a bunch of driver’s features. The Outlander Sport has very quick steering that is somewhat reminiscent of the beloved Mitsubishi Evo X. Turn-in isn’t quite up to sports car spec, but this is a crossover fer cryin’ out loud! Add to that a firm but not crashy suspension and firm anti-roll and you find yourself thinking that the Outlander Sport is about as car-like as crossovers come.
The packaging reinforces that feeling, because the Outlander Sport is rather short (169 inches) and feels closer to the ground than many of the tallish crossovers we see in the office. You just step out of the Outlander Sport; you don’t climb down from it. The big factor than reinforces the dynamics of “car” rather than “SUV” is the weight of this thing. At 3120 pounds, the Outlander Sport tips the scales at the level of a Porsche 911. When wheeling the Mitsubishi around you just don’t sense that the weight is fighting you – because there isn’t as much weight to fight your turning, twisting desires as there ordinarily would be.
Despite the small size and low weight, the car has good room in the rear seat, though it is really no better than a Lancer and probably smaller than a WRX. And with the seats folded, cargo capacity is quite useful (49.5 cubic feet).
But, eventually you come out of the twisties and tromp on the accelerator and then, well, the Outlander Sport is too much “Green” and not enough “formance”. Even with a relatively light car, 148 horsepower isn’t much, though we’ve driven and enjoyed cars with lower power-to-weight ratios. The bigger problem is the dang CVT (continuously variable transmission). Not all CVTs are evil, but this one has at least stood at the crossroads and contemplated an eternity in hell. With this engine, you get the now too familiar CVT drone, where the car revs quickly to mid-rpms and then sits there buzzing away. Mitsubishi did at least see fit to put the superb paddles from the Evo on the steering wheel so that you can put the transmission out of its misery if you wish. That isn’t a terrible answer, except that the shift behavior with paddles is strangely non-linear as if you were with a young driver who hadn’t quite learned to let the clutch out smoothly yet.
You should know that the base Outlander Sport ES can be had with a five-speed manual. I’m guessing that it might be much more enjoyable. We’ll try to get into one, because the core chassis is so promising and the price of the ES is pretty fair (MSRP of $18,495).
We did manage 25 miles per gallon in suburban driving with a fairly heavy right foot, and we averaged 29 mpg on the highway, by the way. So the EPA estimates of 25 city and 31 highway don’t seem far off.
Now, Mr. Mitsubishi, about that Outlander Evo Sport X. We were thinking that you lower the chassis about an inch, drop in the Ralliart motor with the five-speed manual to keep the price down, with $24,999 being a good target. Of course, all-wheel drive is a must, and you put in those Recaro seats. Then if you address the tires to give it a bit more grip and…
Pros
Cons
Tags:
greenformanceMitsubishiOutlander