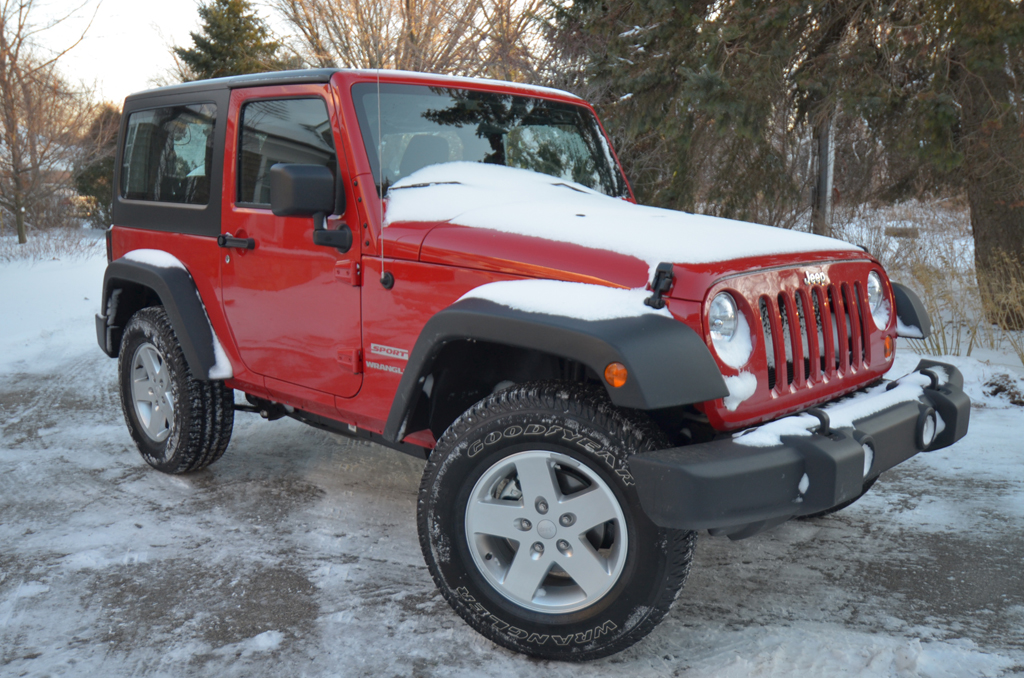 You know the kind of movie where you think, “That’s so bad, it’s good?” Well, the Jeep Wrangler is sort of like that.
What we really mean, at least some of the time, when we’re struck by something we like, but that we know is “wrong” is that it defies the conventional model for success. The Wrangler is a truck, but it is small and therefore not amazingly useful. The Wrangler has solid axles, not just in the rear like the “antidiluvean” Mustang but also in front (making the Mustang seem as modern as an iPad by comparison). The Wrangler is kind of heavy (3760 pounds) and doesn’t have tremendous power (202 horsepower). And yet…the Wrangler manages to be vastly more fun to drive in day-to-day life than many a premium vehicle. That’s because the Wrangler takes the driver seriously, but it does so on its own terms.
Fun in the Wrangler starts where it often does, with the steering. The Wrangler steering is fairly quick and lacks the dreaded on-center dead spot. Couple that with a short wheelbase and you’ve got a car that likes to turn. True, the steering feel is MIA, thanks in part to tall 75 series rubber. But, no big deal, the Wrangler is easy and fun to wheel around.
The Wrangler also demonstrates the transformational power of a manual transmission. The shifter here has rather long throws, and the Wrangler never seems terribly torquey, but the throttle directness afforded the driver by eliminating the torque converter is huge. And you do get the little torque pop that true manuals offer over a dual-clutch AMT.
Finally, at street speeds, the Wrangler demonstrates that a suspension that can be mildly unsettled on bumps is often an entertaining one. Sure, if you’re going toe-to-toe with Sebastian Vettel you want a suspension that keeps the tires optimally aligned with the tarmac. On the other hand, if you’re mainly tooling around town, the Jeep is probably more fun than the RB6. Actually, cancel that, but at least the Jeep is entertaining in town or out on the ranch.
A few other notes from my week in the Wrangler:
–          Ride quality around Chicago (Iraq West) is livable, but the short wheelbase (95.4 inches), firm springs and the solid axles mean that things get a bit bouncy at times
–          I averaged 19.5 miles per gallon in suburban driving
–          Because the Wrangler is fairly tall and has only two doors, rear seat access requires some gymnastics and should never be attempted in a ball gown
–          Rear cargo room, with the rear seat folded up is rather generous (61 cubic feet) and usable thanks to the cuboid shape of the rear compartment
–          Remember, this is a convertible and a rarity among convertibles in offering both four-wheel drive and a manual transmission
As a final thought, the 2011 interior redesign is mostly successful. The dash basically looks good and works well. Aesthetically, it could be a bit more commitment to a pure Jeep design language and a bit less commitment to marketing speak. Still, if you buy one I doubt you’ll care because you’ll be having too much fun driving it.
—Tom Martin, Editorial Director
Pros
Cons
Tags:
4x4JeepJeep Wrangleroff-road