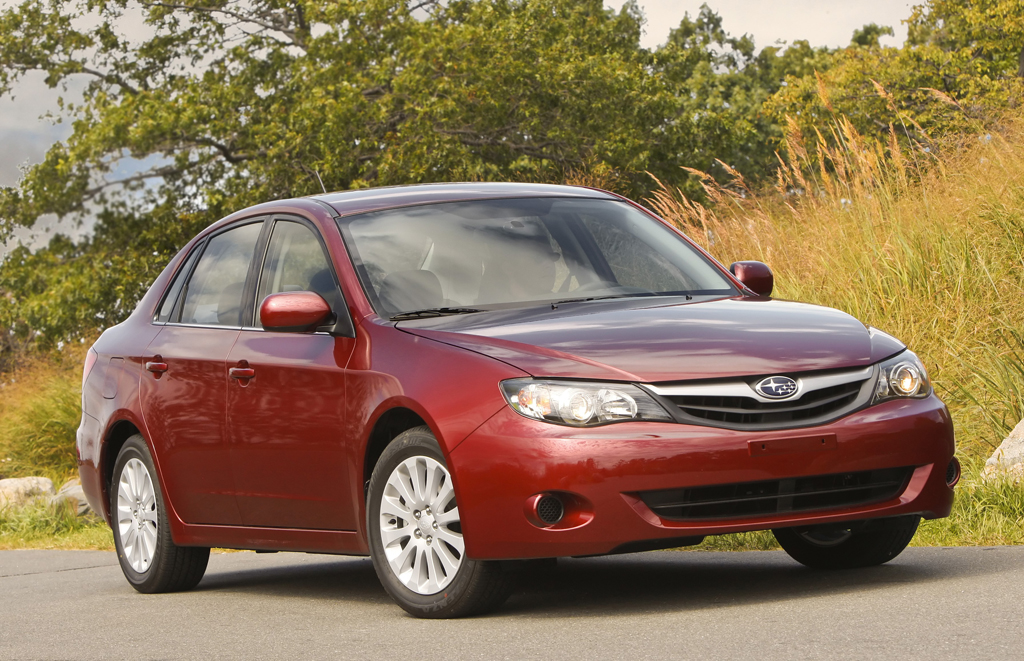 In the ultra-competitive world of the small car, the Subaru Impreza seems to struggle. It doesn’t have the standout looks or better driving dynamics of cars like the Mazda3, or the Honda Civic. It is, however, one of the only cars available for under $20,000 that offers standard all-wheel drive. While this gives the Impreza a bit of an advantage on the competition, I don’t find it enough to make it a really worthwhile buy.

The Impreza is motivated by a horizontally opposed, 2.5-liter four-cylinder that produces 170 horsepower. With power figures similar to 2.5-liter engines from both Mazda and Volkswagen, there is certainly nothing wrong with the Subaru’s engine. Its 3119 pound weight is also similar to the competition.

The transmission is more of a problem than Subaru’s trusty boxer four, as the four-speed automatic just doesn’t shift quickly enough. Application of the throttle generally is met with a longish pause before the autobox feels the need to respond with a kick-down through the gears. I never thought I would say this, but give me the CVT transmission from the Legacy or Outback. At least with that, the fuel economy will increase.

As if the transmission isn’t bad enough, the interior is not great, even in this price range. It is handily outclassed by the likes of the Mazda3, Ford Focus, and Honda Civic. Even less expensive cars, such as Nissan’s Versa and the Ford Fiesta outdo the Impreza. The interior is full of cheap black plastic that squeaks and feels flimsy, especially around the center console. I found the seating position to be less than ideal for a six-footer, too, with limited headroom, and overly narrow seats.

I would rather buy a car without all-wheel drive than consider buying a base Impreza. It simply has too many knocks against it that the all-wheel drive doesn’t make up for.

For the most part, consider me onboard with the complaints of my fleet manager above—the Impreza comes of as being too coarse of a car to be competitive with excellent options in the segment from Japan (Civic) or Korea (Forte). Let’s not forget, Ford’s new Focus and Chevy’s new Cruze look ready to kick some compact-segment ass, too.

Still, I think that dismissing the Impreza’s AWD sedan ability at this price point is probably too harsh. Only the Suzuki SX4 Crossover, which, though quite charming, isn’t exactly a paragon of interior design/quality, offers all-wheel drive for less money.

AWD is a big deal for customers living in the mountainous, wintry climates found in the Rocky Mountain States, and a large part of northern New England. (That both of those regions are Subaru-selling hotbeds is no accident.) Unless you want to spend a good deal more money, or get into SUV or crossover that’s less fuel efficient; you’ll probably be interested in the value that the Impreza offers.

Now that I’ve gotten that off my chest, I’ll admit that I can’t see any good reason to opt for this sedan, autobox version of the Imprezza versus the better-looking, better-driving, more useful five-door hatch with the manual transmission. That iteration has all of the same go-anywhere ability, while embodying more of the “Subaru-ness” that we’ve come to love from the brand.

Our Impreza was pretty much uninspiring. While not a terrible car by any means, nothing about it stood out as special except, maybe, for the all-wheel drive. The suspension was spongy, particularly up front. Power was not super, and was slow to build. Other cars around the $20K mark have higher quality interiors, though the overall design is still the fetching look found in the rest of the Impreza line.

Really, it had a rental car feel to it, and it lacked the personality that can be found in other Subarus. It is a value for the space and for the AWD, but that value comes at the cost of the level of refinement. Still, it’s a livable car for the practical driver, particularly where the roads suffer in the winter.