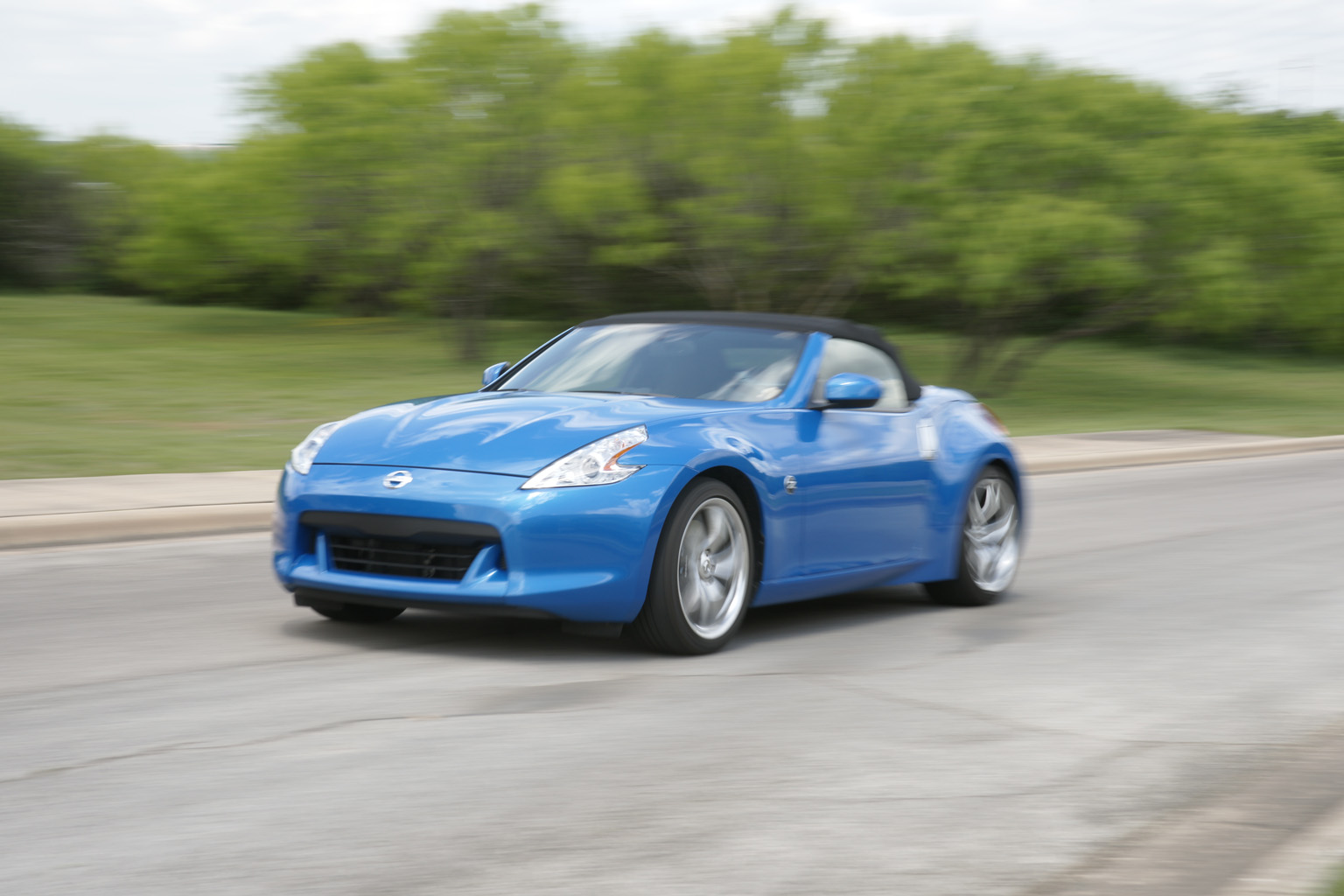 Every time I finished a driving session in our test 370Z Roadster I had the thought “this is really a fun car to drive”. With the exception of the base coupe, I’ve driven all the variants of this new generation of the Z, and the Roadster now climbs to the top rung of the ladder alongside the Nismo version. The Roadster and the Nismo are very different cars, each admirable in its own way. My view is that those differences are a good thing — I’m deeply impressed with Nissan’s ability to dial-in distinctive character traits to suit different drivers and each time end up with a desirable car.

So, what exactly do I find desirable about the 370Z Roadster? Let’s start with the ride/handling balance. The Z Roadster offers up very flat cornering, good turn-in and decent grip. The general orientation feels balanced, though as with most high performance cars there is normally slight understeer toward the limit. But if you jump on the throttle a little early it is very easy to get the tail to step out. The Roadster handles surprisingly like a smaller Corvette, and I mean that as a compliment. But the ride quality of the 370Z is leagues beyond what the Corvette will give you. The 370Z suspension simply feels supple and unperturbed. The ride is firm to be sure, but not at all crashy. Urban swales and pavement transitions are beautifully handled. I would say the ride/handling balance is in BMW territory, except that I think the 370Z handling on the street is better (in the sense of more fun). And remember, this is a convertible.
The other charm of the 370Z Roadster resides in the handling balance it strikes between agility and stability. Most cars that are eager to turn give up the last degree of straight-line stability. The Porsche 911 is a good example. And, most cars with a road-eating sense of stability are at least slightly reluctant to turn. The Nissan GT-R is a good example. So, the addictive appeal of the 370Z lies partly in the supernatural way it manages to do both. The Z Roadster loves to turn and it is impressive cruising at 85.
The Roadster is far from flawless. The engine is light on mid-range torque. The shifter is a bit notchy. The visibility is in Camaro territory. The top end of the rev band isn’t very smooth. And yet Nissan has attended to the details in a way that trivializes these criticisms. The Boxster has a (very different) rival. Finally.
—Tom Martin, Editorial Director
I’ll second Tom Martin’s comments that the 370Z Roadster is great fun to drive and that it offers a very fine balance of ride and handling. But let me try to expand on them a bit. First, the 370Z is geared more to appeal to those who define “fun” cars as offering good apparent build quality, comfortable and usable interior and storage spaces, and a broad and accessible performance envelope with high limits. In short, the 370Z is not just a solid performer, but also an accessible one. This approach stands in sharp contrast to an alternative view, which defines “fun” cars as having edgy personas, uncompromising (as in “designed by/for the Marquis de Sade”) ergonomics, and crazy-high performance limits marred by some rough edges. Some cars issue challenges (“I dare you to try and drive me well.”), whereas the 370Z’s low-pitched V-6 burble murmurs irresistible invitations (“C’mon, let’s go out to the back roads and play”).
One of my favorite aspects of the 370Z roadster was the ease with which I could use the throttle to push the car from mild understeer to a more neutral cornering attitude, on through to an equally mild tail-out/oversteer condition. The key is that these throttle-modulated cornering transitions never feel scary or overly abrupt; on the contrary, they’re easy to modulate and control, meaning you can dial-in cornering attitude as you like it. Just be aware that the Z’s grip limits are high enough that they can feel frightening for passengers unfamiliar with the vigorous cornering forces modern sports cars generate.
One more point: If you are by tradition a coupe or sedan person, the 370Z Roadster makes a great introduction to open-air motoring. The automated top is well thought out and simple to use, leading to some terrifically rewarding driving moments. While getting his first taste of top-down driving in the Z, my eleven-year-old son whooped, hollered, stuck his hands up in the slipstream for the sheer fun of it, then turned to me and shouted, “Dad, this is better than any roller coaster.” Amen to that.
—Chris Martens, Technology Editor
Pros:
Cons:
Tags:
2010 Nissan 370Z Roadster370ZNisssan 370ZRoadsterZ RoadsterZ-Car