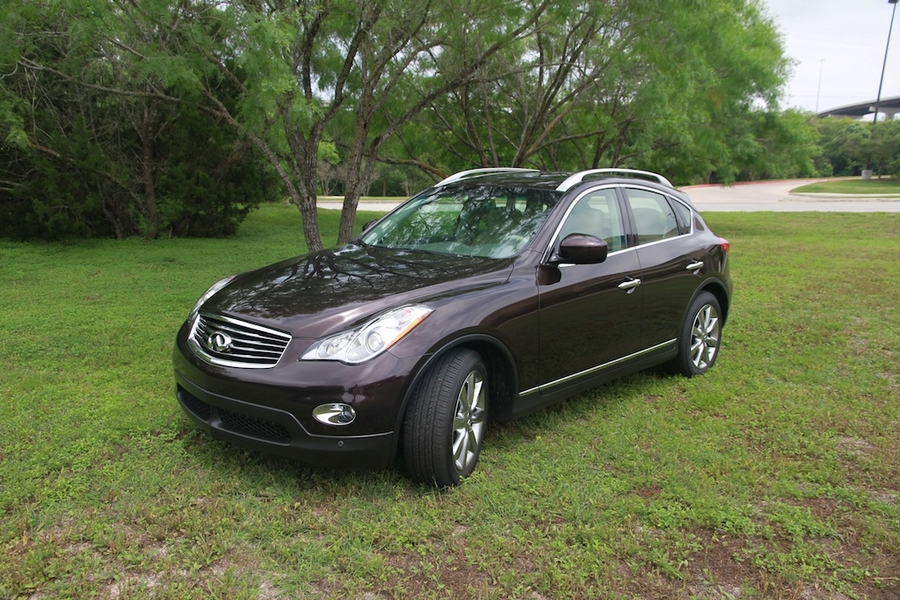 You have to applaud Infiniti for trying to put some dynamic character in almost every vehicle it makes, even when that might not be what is expected. In the case of the EX35, we have a mid-sized SUV that feels a lot like you might expect a SUV would feel if it had a lot of G37 DNA.

The EX35 has a pretty responsive engine and transmission package. And like the G37 it seems to be quick enough without really seeming full-on fast. Part of that “almost” feeling comes from middling torque numbers and part from the automatic’s normal sloppiness. In this sense, the EX35 works like many another SUV in this class.

The steering, though, is set up differently than what you’ll find on other SUVs. The ratio is quite quick, which makes the EX seem rather responsive. I didn’t love the feel of the helm on the Infiniti, especially on-center, but you could certainly do much worse. The handling that accompanies use of the wheel is also more than adequate. The EX isn’t tippy and the grip seems decent. Lateral movements are kept in check.

If you sense that I respected the EX35 more than I liked it, you’re right. What I think I found missing is a sense of character. The Mercedes GLK and even the Volvo XC60 just seemed a smidge or two more engaging, and it wasn’t obvious that I had to give up a great deal in either of those two cars.

Infiniti’s FX35 is one of my favorite SUVs (largely because it takes the “Sport” part of its title in earnest), so that when I met the smaller EX35 I held out hope that it might in some sense be an “FX35 junior.” And in a way, it is. You just can’t hold back that sweet Nissan/Infiniti V-6, and the EX35’s steering is pleasingly quick—never slow, ponderous, or truck-like.

The EX35 is a great size, too: big enough to fit four or even five full-size passengers and a generous amount of cargo, yet small enough to navigate crowded parking lots or narrow back roads with ease. I didn’t have an FX35 on hand for direct comparison, but if memory serves then I would say the EX35 offers better space utilization than its swoopy-looking big brother.

The EX35 interior is, I must say, a downright swell place to spend time. Maybe it’s the materials Infiniti chooses, or perhaps it’s the overall sweep and flow of interior lines and details, but the net effect is to convince both the driver and passengers that the Infiniti folks have their vehicular “cocoon o’comfort” act together in a big way. And did I mention how sumptuous the seating surfaces are? (Put on your very best Homer Simpson voices and you can say it with me: “Mmmmmm, leather…”)

Yet despite these many positive factors, I’d say the EX35 lacks some of the FX35’s quintessential automotive joie de vivre, which is too bad. Somehow, the FX35’s overall throttle response and carefully chosen transmission shift points always managed to convey a capable and even playful eagerness to get out there and drive the winding roads with gusto.  The EX35, not so much.

For whatever reason, the EX engine feels (and sounds) less free-revving, and the transmission—even when set in Sport mode—reflects a not bad but also not good feeling of, as Tom so aptly put it, “normal sloppiness.” This isn’t a tragedy by any stretch of the imagination, since it means that the EX35 feels like a more serious, sober-minded, solid-citizen kind of car than the FX35. It’s just that an elusive element of driver involvement—and hence of fun—seems to have receded into the background.