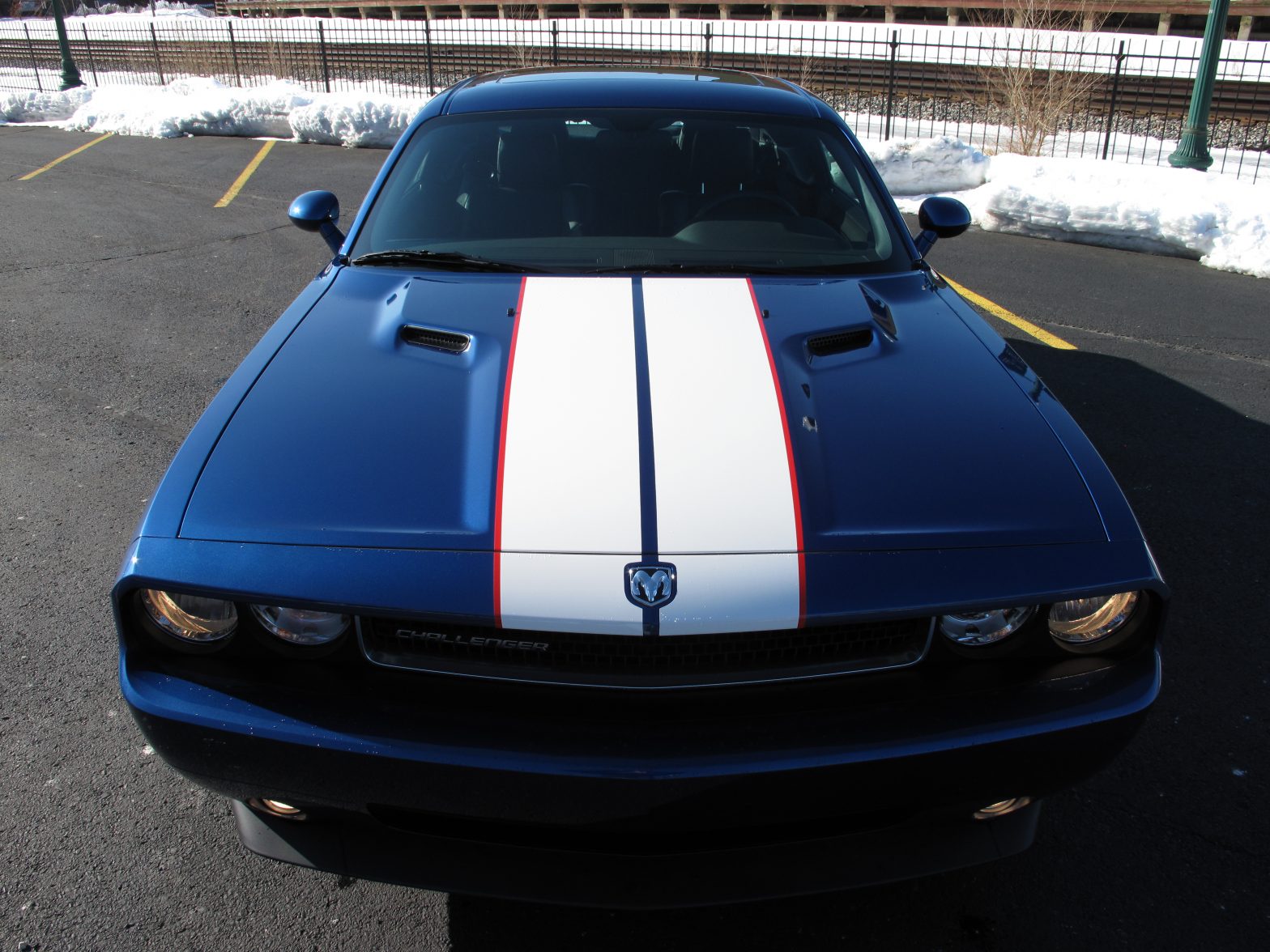 I’ve been in more than a few flavors of Challenger to date, from the full-flavor SRT-8, and down the food chain to a base SE that was much less decked out than our current test car.

The SE (re: the V-6-powered version of this “muscle car”) clearly can’t do what its better-endowed V-8 brothers are able to. That is: no massive acceleration, no fantastic soundtrack, and much less compensation for the weight penalty that the Charger-based car is born with. The car remains a surprisingly good handling vehicle—better roll stiffness and grip than most would expect—but I didn’t notice any real handing advantage from the lighter V-6 out front.

The Challenger SE does, unfortunately, suffer hugely on the expectation vs. reality scale; especially the car in question is loaded up with go-fast stripes and wheels. The public at large love this car: they want to hear its engine rev in parking lots, they want to race it away from the line at stop lights, they want it to live up to its muscle car image. The V-6 SE can’t cash any of those checks that its hot looks are writing. It is, instead, perfectly serviceable at highway speeds, a comfortable cruising coupe, and mildly more fuel efficient than the V-8 versions.

I guess, the Challenger SE is a pretty pitch perfect remake of the muscle cars that came before it in that regard—the V-6 cars have always been about the show, not the go.

It may look the part of American muscle, but the V-6-powered Challenger is truly dull in comparison to its brethren. With already soft handling, the lack of sharp power response kills the fun of what would otherwise be an entertaining vehicle. It feels as if every driver input, whether it be from hand of foot, just takes a half-second too long before anything happens.

Regardless of what’s under the hood, the space, comfort, and style that draw drivers to the Challenger are still there. It just doesn’t get my heart pumping like the sweet engine note or wheel-spinning burliness that either of the V-8s offer. Step on the gas, and if the excitement isn’t there, suddenly style doesn’t matter so much anymore.

I was extremely excited to finally get behind the wheel of a Challenger, even if it was only a V-6. The classic lines, ripped straight from 1971, the white stripes with the red outlining, and the rally style wheels make for a car with an amazing amount of road presence.

I just can’t help feeling let down though. This car screams classic, muscle car, Americana, but its delivery is far more Malaise Era. Besides the looks, everything is just “okay”. It’s like Chrysler spent a lot of time on the exterior, decided it was enough, and then threw in whatever parts were laying around to complete the car.

The overworked V-6 never really delivers on the noise it makes at low, cruising rpms, and when redlined sounds down right coarse. The wooden steering and squishy suspension crush any sporting ideas that you might have, but it is totally acceptable for a comfortable cruise down Woodward Avenue (which this journalist couldn’t resist doing each night it was brought home).

I guess that is what the V-6 is meant for. It isn’t meant for smoky burnouts, trips to the drag strip, or racing from light-to-light on your favorite stretch of asphalt. It’s for comfort and appearance, finding a nice city boulevard, putting the windows down, turning the radio up, and relishing the trip from point A to point B.