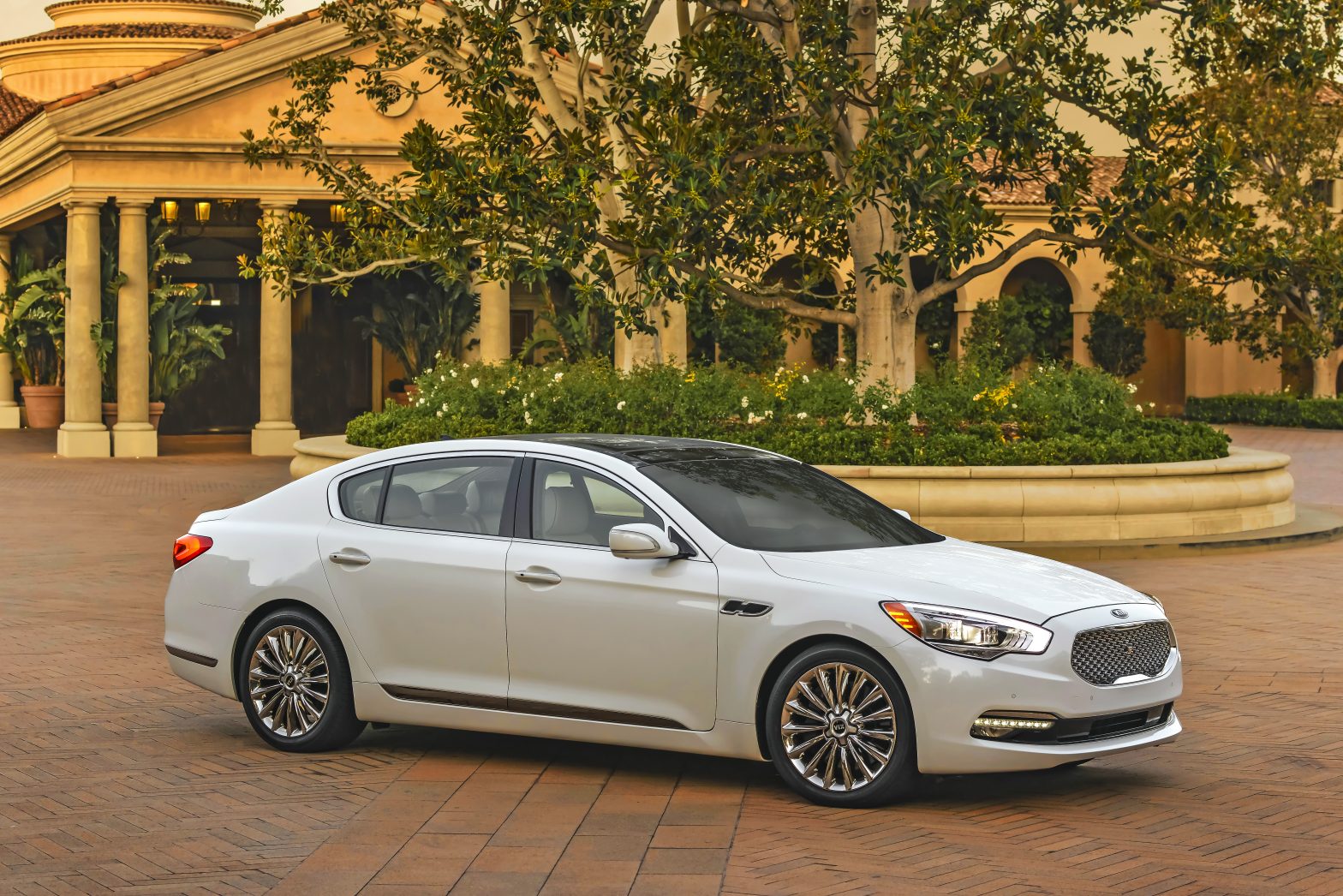 This is the Master Landing Page for the Kia K900. From now on, as we further review this car, we will be updating this page with whatever fresh content we create. Future drive reviews, updated specifications, videos, and other relevant information will all be found right here, in one convenient spot.
SUMMARY
Kia has revealed its new rear-wheel-drive flagship sedan, the Kia K900, at the Los Angeles Auto Show. With available V-6 and V-8 engines, it is Kia’s first large sedan, and its first rear-drive sedan.
Topping the line is the first V-8 engine Kia has ever offered. The “Tau” 5.0-liter uses direct injection and dual CVVT variable valve timing, and has an output of 420 horsepower and 376 pound-feet of torque. The eight-speed automatic transmission features driver-selectable driving modes—Eco, Normal, and Sport—which also adjust steering sensitivity.

The second engine option is the “Lamba” 3.8-liter V-6, producing 311 horsepower and 293 pound-feet of torque. It also uses direct injection and variable vale timing, as well as a three-step Variable Intake System to provide more torque at the lower half of the rev range. The V-6 sends power to the rear wheels via the same eight-speed automatic transmission, with gearing set to work better with the V-6 power.
The K900 is no small thing. The five-passenger sedan is 200.6 inches long with a 119.9-inch wheelbase. It is 74.8 inches wide and 48.7 inches high, with 110.8 cubic feet of passenger volume. There’s also plenty of room for everyone’s luggage, with 15.9 cubic feet of cargo space.
The profile of the K900 shows a long-is hood with a sweeping roofline extending almost all the way to the rear of the car. Its 19-inch multi-spoke chrome wheels add to its significant on-road presence.

The K900’s interior is focused on luxury and comfort. The seats are high-grade leather, with the option of soft Nappa upholstery. The power adjustable front seats feature standard multi-stage heating and ventilation, so occupants can keep warm in the winter, and avoid the painful experience of having your skin stick to the hot leather seats in the summer sun. The outboard rear seats also offer multi-stage heating, as well as the ability to recline and adjust lumbar and headrest support (V-8 VIP package). Rear passengers can also adjust climate and operate the sunshades in the windows.

The driver’s main tool is a leather-wrapped three-spoke steering wheel with a large variety of controls, so the hands can remain where they belong while driving. The In the V-8 VIP trim level, the driver enjoys a heads-up display, plus a 12.3-inch LCD infotainment screen. The K900 comes standard with rear parking camera and sensors. The V8 also includes a rear cross-traffic alert system and blind spot detection as standard. A lane-departure warning system and radar-based Advanced Smart Cruise Control are also available on both models.
The 2015 Kia K900 is slated to go on sale in the United States in the first quarter of 2014.
Scroll down for more details in the press release, or have a gander in the photo gallery.