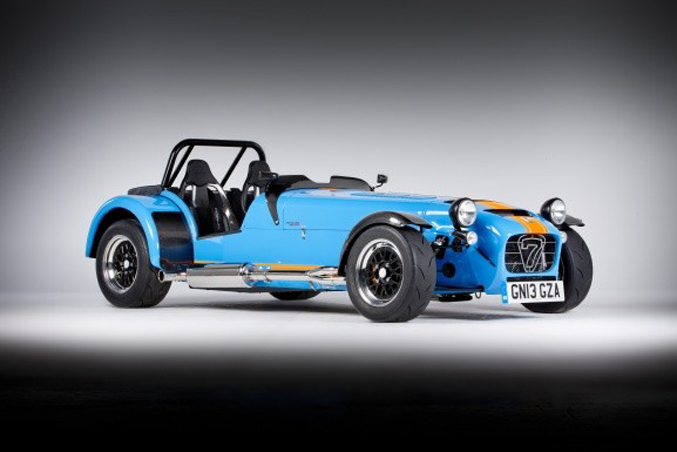 Caterham debuted its newest high-performance model, the Seven 620R at the Goodwood Festival Of Speed. Calling it the “most extreme Seven to date,” the replacement for the Superlight R500 can knock out a 0-60 sprint in under 2.8 seconds.
The Caterham Seven 620R is powered by a supercharged 2.0-liter Ford Duratec engine producing 310 horsepower and 219 pound-feet of torque. Gears are shifted with a six-speed sequential transmission.

The 620R feature a gunmetal chassis, and high performance dampers on the De-Dion rear and wide track, adjustable double-wishbone front suspensions. The car rides on lightweight 13-inch alloy wheels shod in track-inspired Avon ZZR tires.
Carbon fiber can be found throughout the vehicle, in the wings, interior panels, dash, and race seats. Inside, the driver will find instruments and switchgear more suited to performance driving, as well as a Q/R racing wheel for steering duties.

Caterham has plans for another version of the Seven, which will be quite unlike the 620R in that it will be an “ultra-efficient, affordable entry-level” model. Expect to see that car debut this fall. There will also be a 620S, which will be slightly less hardcore than the range-topping 620R.
For the UK, the price is £49,995 (about $75,512), and orders are now being accepted for deliveries later this year.
For more details and information about the Caterham Seven 620R, scroll down to real the official press release.

Telegram From Caterham HQ – The Seven 620 R is unleashed
• Caterham Seven 620 R packs a 310bhp punch
• Supercharged sportscar will do 0-60mph in under 2.8s
• New range-topper deposes legendary R500
• Global debut at 2013 Goodwood Festival of Speed
Caterham Cars will launch its most extreme Seven to date at the 2013 Goodwood Festival of Speed this weekend (July 12-14).
As the lightweight sportscar manufacturer celebrates 40 years of developing and building the Seven, Caterham is re-inventing the already enviable parameters of its iconic model, with the Seven 620 R setting a new benchmark in outrageous performance.
A newly-engineered, two-litre supercharged Ford Duratec engine pumps out 310bhp, providing even more of a kick in the back for the driver and propelling the Seven 620 R from 0-60mph in under 2.8 seconds.
Priced at £49,995 (incl VAT) fully built, such extreme performance, pushing on to a top speed of 155mph, will put the 620 R at the top of the current range, replacing the legendary Superlight R500.
Caterham F1 Team driver Charles Pic will drive the 620 R up the famous Goodwood hill at the Festival of Speed, as will Caterham F1 Team reserve driver and Caterham Racing GP2 driver, Alexander Rossi.
A static version of the new car will also feature on Caterham’s Festival of Speed stand, along with other performance vehicles from across the Caterham Group.
Caterham Cars CEO, Graham Macdonald, said: “The 620 R is the most hardcore production Seven ever built for the road.
“The R500 claimed its place in motoring history as a benchmark for lightweight sportscar performance but this new vehicle pushes the boundaries even further.
“While I wouldn’t necessarily recommend this car for those inexperienced in driving Caterhams, we always ensure that even our fastest cars retain the manageable delivery of power that makes them accessible, despite the daunting statistics.”
The 620 R is diametrically opposed to the new ultra-efficient, affordable entry-level Seven that will sit at the opposite end of the range when Caterham unveils it in Autumn this year.
Like all Sevens, the 620 R adheres to Caterham’s brand mantra of delivering ‘accessible fun’ and the traditional Caterham minimalistic, lightweight approach to the engineering of the car is ever-present.
As well as producing more horsepower and torque than any previous incarnation of the Seven, the 620 R also benefits from several other new enhancements.
The car features a unique gunmetal chassis, an air-flow optimised nose cone and a race-developed cooling package. De Dion rear suspension and wide track front suspension units are complemented by high-performance dampers all round, while the car sits on lightweight, 13” alloy wheels fitted with track-inspired Avon ZZR tyres.
In the cockpit, there are more noticeable improvements, with features including performance-focused instrumentation and ergonomic switchgear.
Meanwhile, carbon fibre interior panels and dash plus carbon fibre race seats and a Q/R race steering wheel complete the sports feel to the interior.
“The Seven 620 R is an extreme piece of kit,” concludes Macdonald. “We know there is demand for cars that re-write the rules of performance and, if you’re brave enough to take it on, the 620 R will be an enormously rewarding, fun car to pilot.”
While the launch edition of the Seven 620 features the sportier ‘R’ pack, a slightly less hardcore ‘S’ pack, which harnesses all the power of the original but offers a little more accessibility will be launched later this year.
Orders are now being taken for the Caterham Seven 620 R, with first deliveries expected later this year.
Caterham Seven 620 R
Engine 2.0-litre Ford Duratec (supercharged)
Max Power (bhp/rpm) 311bhp @ 7,700rpm
Max Torque (lbs ft/rpm) 219lbsft @ 7,350rpm
Weight 545 kg
0-60mph 2.79 seconds
Top Speed 155mph
Caterham Seven 620 R Specification
Standard equipment
• 2.0-litre Ford Duratec (supercharged)
• 6-speed sequential transmission with flat-shift
• Limited slip differential
• Unique gunmetal chassis
• Carbon-fibre wings
• Air flow optimized nose cone
• Race developed cooling package
• De-Dion rear suspension with high performance dampers
• Wide track front suspension with high performance dampers
• Ventilated front discs and quad piston calipers
• Carbon-fibre interior panels and dash
• Carbon-fibre race seats
• Lightweight 13” alloy wheels with Avon ZZR tyres; 185/55R13 front and 215/55R13 rear
• 4 point race harness
• Q/R Race steering wheel
• High performance focused instrumentation and ergonomic switchgear
• Push button start
• Immobiliser
• Sequential shift lights
• Carbon aero screen
• Black pack
Suspension
Front: Adjustable double wishbone with roll bar
Rear: De Dion axle located by lower A-frame and Watts linkage
Brakes
Twin circuit split front/rear with low level warning system. Discs front and rear
Steering
Rack and pinion, 1.93 turns lock to lock
Wheels and Tyres
Front 6J x 13” AVON ZZR
Rear 8J x 13” AVON ZZR
Tags:
620 R620RAvoncar debutcar ridesCaterham CarsdriverFordUnited Kingdom