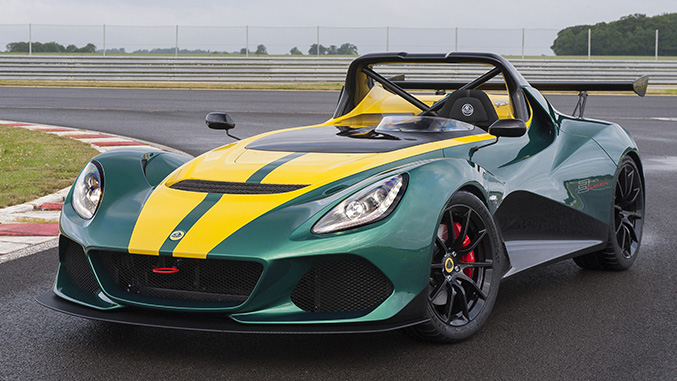 The annual Goodwood Festival of Speed in West Sussex, England is a buffet for the senses and a bucket list item for anyone with a fondness for motorsport and fast automobiles in general. Considering the theme and its locale, nowhere could be more appropriate for Lotus to take the wraps off their latest model, the 3-Eleven, which is both the fastest and most expensive road-going model the company has ever produced.
Two distinct versions of the 3-Eleven will be made, one for use on the street and the other exclusively for track use. Both utilize a bespoke chassis of extruded and bonded aluminum sections and will feature the company’s 3.5-liter supercharged V6, here producing 450 horsepower and 332 pound-feet of torque, which will be managed using a six-speed manual gearbox in the road car and a six-speed sequential transmission in the Race model.

Coupled with a curb weight of under 2000 pounds, the 3-Eleven is poised to offer some truly incredible performance. Lotus says the new car will be able to get from 0-60 miles per hour in under three seconds on its way to a top speed of 180 mph.
On the handling front, the 3-Eleven uses a double wishbone suspension design in the front and rear while adjustable Öhlins dampers are coupled with Eibach springs. AP Racing will supply the braking system, which utilizes four-pot calipers and a Bosch ABS system specially tuned by Lotus.

The 3-Eleven will sport forged aluminum wheels as standard, measuring 18 inches up front and 19 inches in the back, wrapped in either Michelin Pilot Super Sport or Michelin Cup 2 tires depending on whether it’s the Road or Race version of the car. The aggressive aero package included in the Race model offers 475 pounds of downforce at 150 miles per hour, and all told, it’s said to be the quickest Lotus production car ever, having lapped the Hethel track in 1 minute, 22 seconds.
Just 311 examples of the new car will be hand built at the company’s factory in Hethel, England, with production scheduled to begin in February of 2016 and first deliveries arriving in April. Pricing for the the 3-Eleven starts at £82,000 (~$129K US) for the Road version and £96,000 (~$150K US) for the Race version.

No official word yet on US availability, but it’s a near-certainty that someone will import the Race versions for track day enthusiasts in the States at the very least.

PCA at CoTA: The Perfect Blend of Car Fans