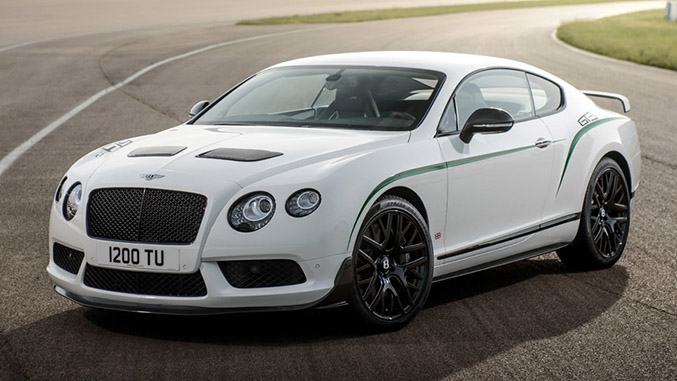 This is the overview page for the Bentley Continental GT3-R. Rumors, news, reviews, road tests, specifications, videos, awards, and other relevant information will all be included here as they become available.
PREVIEW
Until very recently, it’d been quite a while since a factory-entered Bentley had taken the victory in a top tier racing event in the UK. Eighty four years, to be exact. But when a Continental GT3 secured the top spot in the second round of the Blancpain Endurance Series at Silverstone, it was certainly cause for celebration. For Bentley, that meant taking this winning formula to the street in the form of a hardcore, limited edition road-going version of the GT3 race car, dubbed the Continental GT3-R, which is now the fastest accelerating Bentley ever made for the street.
What is the basic idea behind the Bentley Continental GT3-R — how is it special?
Limited to just 300 examples worldwide, the GT3-R starts off life as a standard, hand-built Continental GT from Bentley’s Crewe, UK factory, and is then sent on to Bentley Motorsport for a thorough warming-over to boost power, reduce weight, and improve handling.
How is the Bentley Continental GT3-R different from the GT V8 S?
No one has ever accused the Continental GT of being a featherweight coupe. Bentley Motorsport is well aware of that, so they set out to put the GT on a comprehensive diet, cutting more than 200 pounds off the car’s curb weight in the process. Part of that diet included ditching the rear seat and fitting a pair of bespoke, carbon fiber racing seats up front, along with a set of lightweight 21" forged wheels, carbon fiber aero pieces, and an all-new titanium exhaust, the latter of which provides the GT3-R with a wholly unique baritone roar. The GT3-R version of the Continental weighs in at approximately 4839 pounds.
The 4.0-liter, biturbocharged V8 sees increased boost and revised engine mapping, bringing it to 572 horsepower and 516 foot-pounds of torque, up 51hp and 18lb-ft from the GT V8 S. Power is sent to all four wheels via an eight-speed ZF automatic gearbox with revised gearing aimed at improved acceleration. These revisions equate to a 0-60 sprint of 3.6 seconds – seven-tenths of a second faster than the V8 S – although the top speed has been reduced to 170mph as a result of both the gearing and aero tweaks.

In terms of handling, torque vectoring makes its debut in a Bentley road car for the first time, along with a revised electronic stability control system which has been updated to take advantage of the GT3-R’s new sport-tuned air springs and dampers that have been honed to a high performance spec from their use in V8 S. Bentley promises a "whole new level of handling dynamics and turn-in agility" from the GT3-R.
Stopping power is also uprated, with 420mm discs clamped by eight piston calipers are equipped in front, while 356mm units are found in the rear.