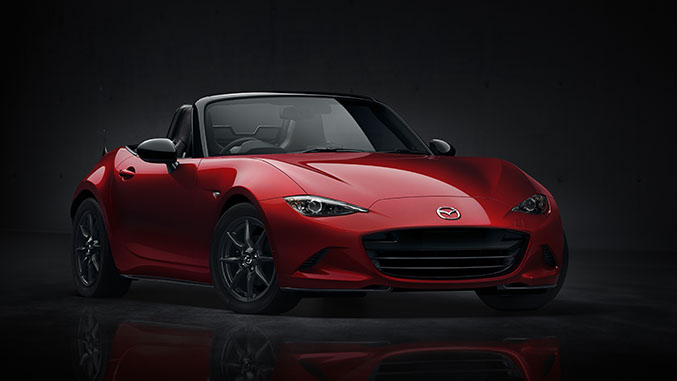 This is the overview page for the 2016 Mazda Miata. Rumors, news, reviews, road tests, specifications, videos, awards, and other relevant information will all be included here as they become available.

CAR magazine has provided a rendering of what they envision the next MX-5 may look like. Additionally, the team at CAR has a few theories about what changes await the legendary two seater.
To start with, and much to the glee of MX-5 enthusiasts, Mazda will continue its efforts to cut down weight across their model lines, which includes the Miata. To that end, the next MX-5 is rumored to weigh one approximately one tonne, or 2204 pounds.
CAR further speculates that the MX-5’s output will also get a modest bump as well, pushing output over 200 bhp for the first time. They expect to see naturally aspirated versions of Mazda’s 1.6 and 2.0-liter engines, along with the availability of a ragtop and folding hardtop roof.
Mazda has been pretty quiet about when we might get a glimpse of the upcoming refreshed roadster, but we’ll be keeping a keen eye out for anything Mazda might have on offer at next weeks Detroit Auto Show.
UPDATE
2014 marks 25 years of Miata, and Mazda plans to celebrate a quarter century of the beloved roadster in grand form at the New York Auto Show next month.
Mazda plans to bring 15 of its favorite MX-5 flavors from throughout its history to the New York event, showcasing everything from concepts and race cars to special edition production Miatas.
Jim O’Sullivan, president and CEO of Mazda North America, promises that among those will be the debut of the fourth generation MX-5, which promises to continue to embody all the characteristics that have helped make the Miata a motoring legend:
"The MX-5 Miata is the quintessential Mazda, and after 25 years, every vehicle in the lineup continues to feature some characteristic of MX-5: a fluid shifter, lightness on its feet, quickness around a corner, a fun-to-drive DNA. With all the whiz-bang technology and comfort amenities increasingly added to modern vehicles, MX-5’s direct connection between car and driver still remains the standard feature that puts smiles on drivers’ faces."
The fourth generation MX-5 will share its platform with an as-yet unnamed Alfa Romeo roadster, each powered by bespoke motors unique to both brands. It is estimated that about 40% of the parts will be common between the two cars, with a curb weight of roughly 2200 pounds and an output of about 170 horsepower.
Source: Autoweek
UPDATE #2

Mazda has been teasing us with tidbits on the long-awaited fourth generation Miata for quite some time now, but it looks like the wait is nearly over. We saw the chassis and drivetrain pictured above at the New York Auto Show earlier this year, which promises weight reduction, a revamped multilink rear suspension, and a bump in power among various other upgrades. What we didn’t see was a proper debut of the complete car – or even a promise of when that might be.
But all that is about to change. In just two short months, all will be revealed at three simultaneous global events in Japan, Spain, and here in the US at Mazda Raceway Laguna Seca, the latter of which is part of a precursor to the enthusiast-operated event known as Miatas at Mazda Raceway, which will be held on September 5-7. The next-generation roadster will be on display alongside an array of heritage, concept and motorsports MX-5s.
In the meantime, Mazda offers us a taste of what the driving experience of the new MX-5 will sound like, complete with turbo noise:
As always, don’t forget to check back at the overview page for the new MX-5 for the latest updates as we have them.

After months, perhaps years of anticipation, Mazda has unveiled the design of the all-new fourth generation Miata.