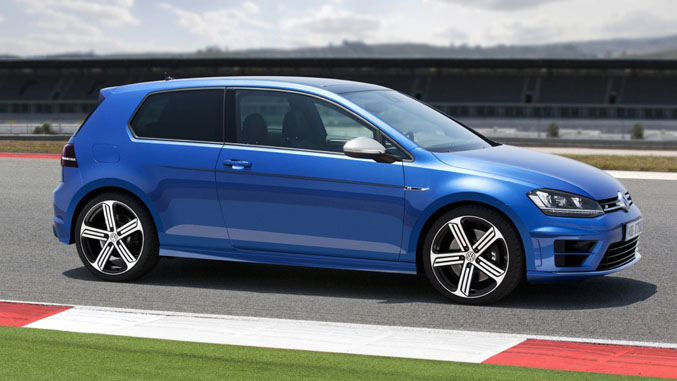 This is the overview page for the 2015 Volkswagen Golf R. From now on, future drive reviews, updated specifications, videos, and other relevant information will all be included here.
PREVIEW
At this week’s Detroit auto show, VW brought out the latest high performance version of their seventh generation hatchback, the Golf R. Along with updated styling, the new hot hatch gets more power, a new transmission option, better fuel economy and, perhaps most intriguing, a more flexible all-wheel-drive system.
The new Golf R’s powerplant is a 2.0-liter turbocharged four-cylinder that’s able to crank out 290 horsepower and 280 lb-ft of torque – increases of 34 hp and 37 lb-ft over the previous generation R model. Riding on the lighter chassis of the seventh generation Golf, the R routes its power through a choice of either a six-speed manual gearbox or VW’s six-speed DSG dual-clutch. Opting for the latter will get the Golf R to 60 mph from rest in 4.9 seconds, or 5.3 should one choose to row through the gears manually. Manual gearbox buyers can win back some piece of mind knowing that cars equipped as such get a bump in fuel economy, with the manual Golf R now capable of returning 31 mpg on the highway.

Using a new version of VW’s 4MOTION all wheel drive system, along with a new Haldex coupling, the automaker states that should the need arise, the system is able to send nearly 100 percent of available torque to the rear wheels. Additionally, the Golf R is equipped with an XDS+ cross-differential lock at the front and rear, which works similarly to an active torque vectoring system in that it applies power to the outside wheels while simultaneously applying the brakes to the inside wheel when needed during hard cornering. These systems, along with the inclusion of the second-generation DCC adaptive dampening and the newfound ability to fully disable stability control should help mitigate the previous generation’s tendency to push in hard cornering.