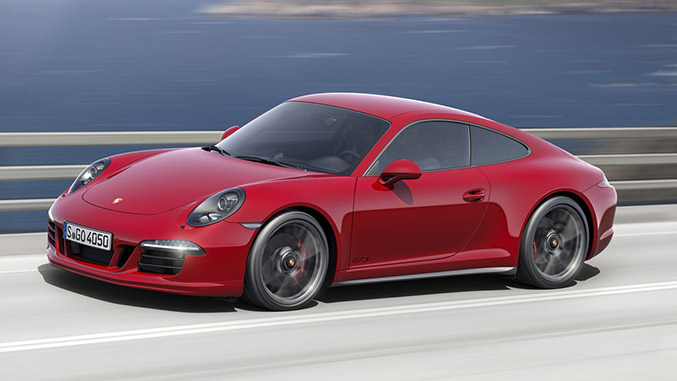 This is the overview page for the 2015 Porsche 911 GTS. Rumors, news, reviews, road tests, specifications, videos, awards, and other relevant information will all be included here as they become available.
PREVIEW
Back in March, Porsche announced it was reviving the GTS badge on the Boxster and Cayman models, the first mid-engined models to wear the emblem since the 1963 Carrera 904. Now the automaker has decided to apply the GTS treatment to the venerable 911 with four new iterations of the sports car that offer more power, uprated suspension, additional features, unique aesthetics, and perhaps most importantly to some, a more viable alternative for those who want a 991 GT3 but demand a manual gearbox.
Available in coupe or cabriolet and RWD or AWD with either roof, the GTS models bridge the gap between the Carrera S and the more track focused 911 GT3. Based on the 911 Carrera 4 body, all 911 GTS models will feature flared rear wheel arches and a wider track, and receive the 430 horsepower version of the 3.8-liter flat-six used in the Carrera S Powerkit, which also includes the Sport Chrono package and Sport Exhaust system. The PASM active damper system is also standard on all GTS models, and lowers the ride height by 10mm.

Equipped with the PDK transmission, the hardtop 911 GTS can reach 60 mph from rest in 3.8 seconds, taking a tenth off the sprint to 60 mph of the S model. Top speed for the 911 GTS ranges from 187 to 190 miles per hour, depending on the model’s drivetrain and transmission configuration.
Other standard equipment for the 911 GTS includes tinted Bi-Xenon headlights, Alcantara interior trim, gloss black exterior trim and tailpipes, exclusive 20-inch gloss black center lock wheels, and a customized GTS air intake.

With the addition of these four GTS models, the total number of 911 variants available today now stands at a whopping nineteen different models, make it an even safer bet that Porsche has a 911 available to please just about any customer.
The 911 GTS should arrive in Porsche showrooms by the end of 2014 starting at $114,200, with the GTS Cabriolet coming in at $126,100. AWD models will set you back $120,900 for the coupe and $132,800 for the convertible.
Check out the press release below for additional details on the new 911 GTS.
ENHANCED POWER AND PERFORMANCE – THE NEW PORSCHE 911 CARRERA GTS MODELS
Four new GTS models added to the 911 Carrera family
Atlanta. Porsche has revealed the second generation of 911 Carrera GTS models. The GTS models are available as coupe and cabriolet versions, with rear-wheel drive or all-wheel drive. These new models bridge the gap between the 911 Carrera S and race track tested 911 GT3. Several technical features heighten dynamic performance and driving pleasure, including the 430 horsepower engine from the Carrera S Powerkit which incorporates the Sport Chrono package and Sport Exhaust. The standard PASM active damper system lowers the ride height by 10 mm compared to the 911 Carrera.
When equipped with PDK (Porsche Doppelkupplung dual-clutch transmission), the 911 Carrera GTS sprints from zero to 60 miles per hour in 3.8 seconds (Cabriolet: 4.0 seconds) – which is one-tenth of a second faster than the S model. Top track speeds for the GTS models range from 187 to 190 miles per hour, depending on drivetrain and transmission. Despite quicker acceleration and higher top speeds, the GTS versions retain a similar level of efficiency as the 911 Carrera S models.
Added performance and an extended range of standard features make the new models attractive in price as well. Standard equipment includes Bi-Xenon™ headlights with the Porsche Dynamic Light System (PDLS) and the Sport exhaust system, which delivers an unmistakable GTS sound. The Alcantara® interior features leather-trimmed sport seats with center panels made of made of Alcantara® – a traditional feature of all Porsche GTS models.
The exterior of the new GTS models differs significantly from the other Carrera variants. All GTS versions are based on the 911 Carrera 4 body with flared rear wheel arches and a wider track.
Also standard are 20-inch center lock wheels, painted in an exclusive gloss black. Special trim elements and tinted Bi-Xenon™ headlights accentuate the front end, while black trim strips on the customized GTS air intake and black chrome-plated exhaust tailpipes distinguish the rear of the Carrera GTS models.
With the addition of the new GTS models, the 911 family now consists of nineteen sports cars which range from 350 to 560 hp. MSRP for the 911 Carrera GTS starts at $114,200, while the 911 Carrera GTS Cabriolet starts at $126,100. The 911 Carrera 4 GTS will have an MSRP of $120,900 in Coupe and $132,800 in Cabriolet form. A destination charge of $995 is not included in the MSRP. The four models will be available at U.S. dealers by the end of 2014.
Tags:
911GTSPorsche