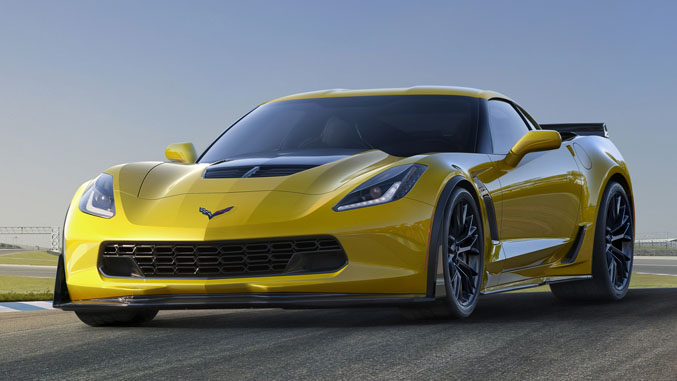 This is the overview page for the 2015 Chevrolet Corvette Z06. Rumors, news, reviews, road tests, specifications, videos, awards, and other relevant information will all be included here as they become available.

Today at the 2014 Detroit Auto Show, General Motors unveiled the C7 Corvette Z06. The new track-focused Corvette boasts a stunning new carbon fiber aero kit which only hints at the performance potential held within. In fact, according to GM, the new Z06 will be the most capable and fastest road-going Corvette they’ve ever produced, besting even the previous generation’s ZR1.

The heart of the new C7 Corvette Z06 is the supercharged, direct injected 6.2-liter LT4 V8, generating "at least" 625 horsepower and 635 lb-ft of torque. That twist can be sent to the rear wheels by way of either a seven-speed manual gearbox with a new dual-mass flywheel and dual-disc clutch, or GM’s own all-new eight-speed automatic gearbox. GM boasts that the new automatic is capable of wide-open throttle upshifts that are executed up to eight-hundredths of a second quicker than those of the dual-clutch transmission offered in the Porsche 911, while the extensive use of aluminum and magnesium make it more than eight pounds lighter than the outgoing six-speed slushbox.

As previously mentioned, the Z06 comes with a host of aerodynamic upgrades that, in concert, serve to provide the newest Stingray with an even more aggressive persona. In fact, the Z06 will offer three trim levels of aero: The first includes all the pieces found within in the standard Stingray outfitted with the Z51 performance package, while the second level of aero upgrades adds a carbon fiber front splitter with aviation-style winglets, carbon fiber rocker panels, and a larger rear spoiler with a fixed wickerbill. The third aero kit – part of the Z07 package – will add even more downforce capability to the Z06 package via larger winglets added to the front splitter, along with an adjustable, see-through center section on the rear spoiler for track use. GM is still fairly mum on any additional specifics about the Z07 package, as development is currently ongoing.
Corvette design director Tom Peters had this to say about the Z06’s new aggressive, purpose-driven look:
“Practically every exterior change served a functional purpose, as this beast needed more of everything. The flared fenders accommodate larger, wider wheels and tires for more grip. The larger vents provide more cooling air to the engine, brakes, transmission and differential for increased track capability. The more aggressive aerodynamic package generates true downforce for more cornering grip and high-speed stability.”
To make use of all this new capability, the Z06 seems a significant upgrade in both tires and brakes as well. The Z06 will see added grip in the form of Michelin Pilot Super Sport tires for the Z06 and Sport Cup 2 tires with the Z07 package, measuring P285/30ZR19 in front and 335/25ZR20 in the rear – an increase of width of 1.5 and 2.0 inches over the standard Stingray’s setup, respectively.
To facilitate the girth of this new rubber, the fenders of the Z06 were extended by 2.2 inches at the front, and 3.15 inches at the rear, in turn giving the Z06 an even more aggressive stance and track-derived look. Those meaty new tires are mounted on new lightwieght spin-cast aluminum wheels which measure 19 x 10 in the front and 20 x 10 in the rear.
Those new wheels will also showcase the new braking system, which includes two-piece steel rotors measuring 14.6 in front and 14.4 out back, with aluminum Brembo six-piston and four-piston fixed calipers on the Z06 and larger, 15.5 front and 15.3 rear carbon ceramic-matrix brake rotors on hand for the Z07 package – a package which not only provides more consistent performance during track duty, but also saves 23 pounds of weight over the system fitted to the Z06.

Quarter mile times are equally impressive, with the automatic-equipped Z06 doing the deed in 10.95 seconds and the manual version completing the 1320 in 11.2 seconds, with both versions hitting 127 mph through the traps.
Of course, the Z06 isn’t just about straight line speed – these cars are really made to tear up a road course. To that end, the new Z06 posts the shortest braking distance of any GM production vehicle ever tested at 99.6 feet. In terms of cornering, the new Z06 provides 1.2 g lateral acceleration – beating the Corvette’s previous best of 1.13 g. This equates to a Corvette Z06 that’s a full second faster around GM’s 2.9-mile Milford Road Course than the C6 ZR1.

All performance stats were accomplished with Z06 coupes fitted with the Z07 performance package, which adds Brembo carbon ceramic brake rotors, Michelin Pilot Sport Cup 2 tires, and aerodynamic aids that provide more downforce than any production car ever tested by GM.
Performance junkies still have a few months to save their nickels and dimes, as the 2015 Corvette Z06 coupe will go sale in in early 2015 starting at $78,995, while the ragtop Z06 is set to land in showrooms in the second quarter of next year, priced at $83,995.
Check out the press release below for some additional details.
New eight-speed automatic enables 2.95-sec. 0-60 time, 10.95-sec. quarter-mile
DETROIT – The performance of the all-new, 2015 Chevrolet Corvette Z06 establishes it as one of the most capable vehicles on the market – and one of the few to achieve sub-3-second 0-60 performance and a sub-11-second quarter-mile time.
“The Corvette has long been known as America’s sports car,” said Mark Reuss, General Motors’ executive vice president, Global Product Development. “With the capability of the new Z06 rivaling the best performance cars in the world, we will also be America’s Supercar.”
The Corvette Z06 accelerates from a rest to 60 mph in only 2.95 seconds when equipped with the all-new, available eight-speed paddle-shift automatic transmission – and achieves it in 3.2 seconds with the standard seven-speed manual transmission.
A quarter-mile sprint takes just 10.95 seconds with the eight-speed automatic and 11.2 seconds with the seven-speed manual. With both versions, the Corvette Z06 hits 127 mph at the end of the quarter-mile.
When it comes to braking performance, the Z06 can stop from 60 mph in only 99.6 feet. That’s the best braking performance of any production car GM has ever tested. Additionally, the Corvette Z06 achieves 1.2 g in lateral acceleration compared with the Corvette’s previous best 1.13 g.
The new Z06 is also the fastest production car ever tested at GM’s 2.9-mile Milford Road Course, beating the record set by the Corvette ZR1 by a full second.
All test results were achieved with Z06 coupes fitted with the Z07 Performance package, which adds Brembo carbon ceramic brake rotors and Michelin Pilot Sport Cup 2 tires. The Z07 package also features the most aggressive aerodynamic package available on the Corvette Z06, which delivers the most downforce of any production car GM has ever tested.
“The defining aspect of driving the Z06 is seamless integration of power, technology and aerodynamics,” said Tadge Juechter, Corvette chief engineer. “As a result, the Z06 delivers ferocious acceleration, tenacious handling, and high-speed stability that few cars can match.”
It is the first Corvette Z06 with a supercharged engine – SAE certified at 650 horsepower and 650 lb-ft of torque – and the first with an available eight-speed paddle-shift automatic transmission. Performance-enhancing Magnetic Ride Control and Performance Traction Management are standard, and the award-winning, industry-first Performance Data Recorder is available.
The 2015 Corvette Z06 coupe goes on sale in in early 2015 priced at $78,995, while the Z06 convertible goes on sale in the second quarter, priced at $83,995.
Tags:
Chevrolet CorvetteGeneral MotorsZ06