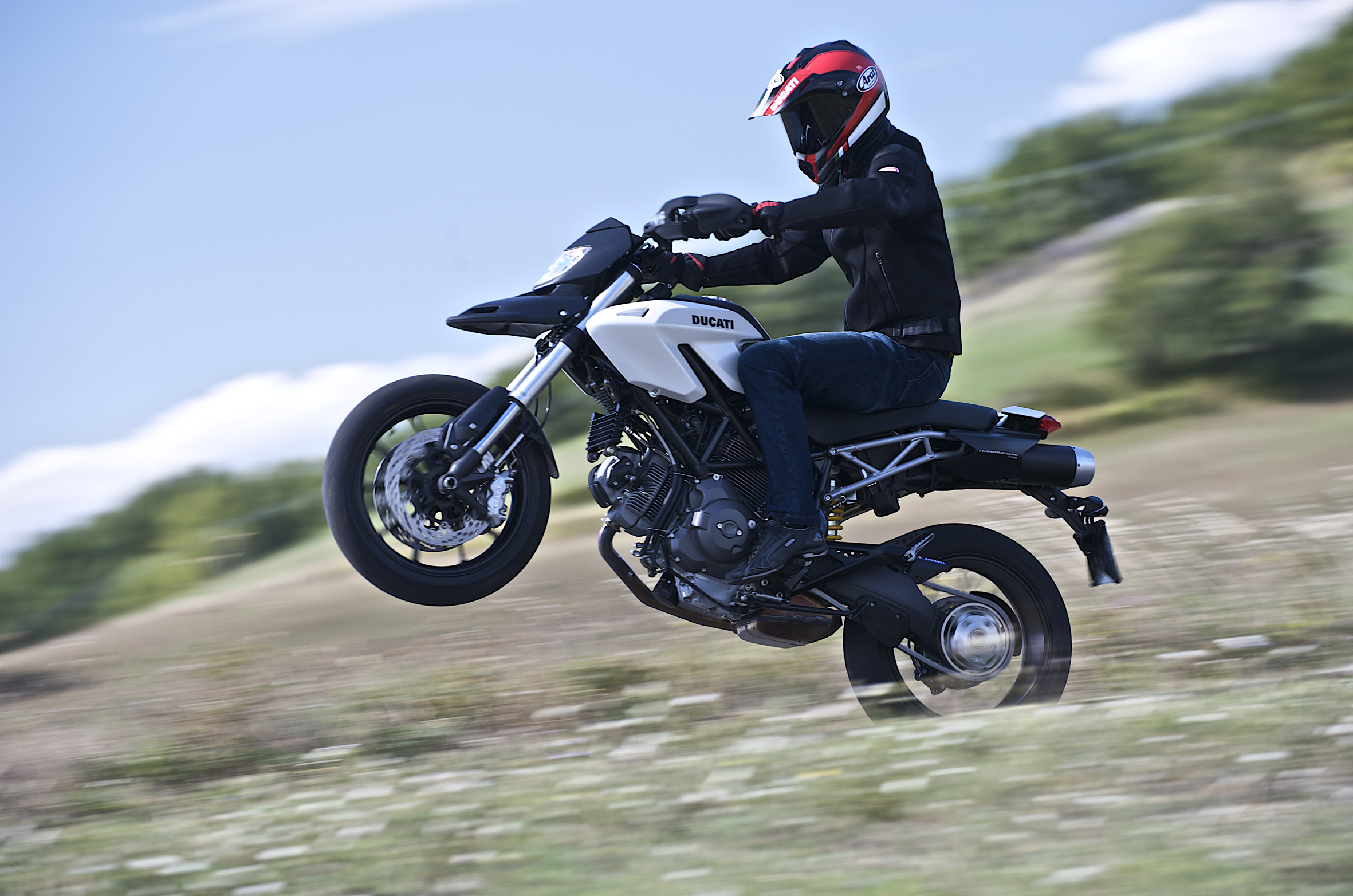 The New Ducati Hypermotard 796 might not be the fastest, biggest, or sharpest bike that money can buy, but it strikes a distinctly adult balance that should tempt occasional riders.

The light steering feel. The howl of the motor as it closes on the redline. The tossable nature of the chassis. The look of the machine as it sits cooling after a hot run.

Among the hundreds of motorcycles available in the United States, models self-sort into specific categories. There are practical bikes, off-road bikes, cruisers, dual-purpose bikes, sport bikes, touring bikes, and a huge class of two-wheeled rockets that have bigger and more powerful engines than many cars.

For the enthusiast with the open mind, all of this makes motorcycles hugely interesting—once you get past the fear of ending up as an ersatz Kenworth hood ornament.

The bike pictured here is the Ducati Hypermotard 796, introduced in Milan last November. Two-wheeled Gnostics classify the 796 as a middleweight naked street fighter. In other words, this new Ducati is not a big-horsepower sport bike capable of 200 mile per hour Police-versus-Rider YouTube videos. Nor is the 796 a proper touring bike, a laid-back cruiser, or a high-mileage commuter special.

The newest Ducati occupies a special place in the cycling world that makes it a serious contender for mature, occasional riders who still like to have some good, clean, road-rash free fun.

Car guys might think of the 796 as the two-wheeled equivalent to the minimalist Lotus Elise. Like the Elise, the Hypermotard is light—just 368 pounds. On the light side for a middleweight bike, this is less than half what a touring rig runs, and only about 60 percent of a big-bore cruiser bike.

Just as with the Elise, with so little weight, little power is required for great entertainment. The Hypermotard’s L-twin displaces 803 cubic centimeters, from which comes 81 horsepower at 8000 rpm and 55.7 pound-feet of torque at 6250 rpm. Far from equaling the mighty Suzuki Hayabusa’s 175 horsepower, it is eleven more than a Smart ForTwo. Within its class, the Italian twin is not the power champ, but it’s also not the wimp. The Triumph Speed runs with a 105-horsepower triple, while the Kawasaki ER-6n makes due with only 72 horsepower from a parallel twin.

The twin-spark plug, four-valve twin idles smoothly enough, gently shaking your hands in a way that’s smoother than larger V-twins, but less refined than the silkiest four-cylinder engines. Blip the throttle, however, and concerns of vibrations get kicked to the curb.

More revs bring on the could-be-trademarked Ducati exhaust note. Thanks to their unique valvetrains, Ducati engines howl like no other. Unlike coil-spring sprung valves, Ducati L-twins use rocker arms to close the valves, as well as open them. The Desmodromic design helps the valves operate more precisely given the cam’s aggressive profile, especially at high speeds when valves can float. It works so well that these engines have helped Ducati win sixteen of the last nineteen World Superbike Championship Manufacturer’s titles—all while making some great noises.

The entire engine is a stressed component of the skeletal frame that leaves all the mechanicals out in the open. The welds and machining on the hand-built bike are smooth and precise.

The only bodywork is the sharp front beak that’s integrated into a small headlight assembly. Eschewing the popular superbike look that encases nearly everything in a sheath of plastic, the Hypermotard possesses some clever styling cues. LED turn signals are molded into the hand shields that move along with the handlebars. Side mirrors sprout off the end of bars, and can be folded in. (Italians would say, "We don’t need no stinking mirrors!") The twin exhaust pipes look like mortar cannons, exiting just below the LED brake light.

Unlike the sportbike crouch (which is hard on the wrists) or the laid-back cruiser slouch (which compromises bike control), the Hypermotard’s upright seating position (more like a dirt bike) puts the rider in an excellent position to hustle through switchback corners.

The low 32.5-inch seat height keeps the bike’s center of gravity low and provides a welcome secondary benefit of putting novice and occasional riders immediately at ease. As one rolls on the throttle, the Hypermotard 796 maintains this character.

Just about everything about the bike feels easy, direct, and controllable. Some bikes give off a dangerous vibe—like they want to kill their rider. Bikes designed for cruising or touring often signal their rider with a "Hey, don’t rush me!" In sharp contrast to these messages, the Ducati clearly tells its riders to have fun. Seen kids flying off curbs on their BMX bicycles? It’s that kind of feeling.

The wide-set bars make it easy to bend into a corner. The grips telegraph details about available traction and the road surface. Special thanks go to upper and lower fork braces that prevent front-end sloppiness.

The broad saddle provides plenty of room to move fore and aft plus side to side, a big plus on twisty roads.

Following a solid launch, 60 mph comes up in about four seconds. The 796 is geared for a 133 mph top-end in sixth gear, but high-speed cruising isn’t this bike’s forte. Anything over 80 mph turns the rider into a spinnaker. Obviously, there’s no fairing to hide behind.

While blistering quick compared to cars, this Ducati doesn’t come close to being a two-wheeled performance champ. Just about any 600cc Japanese sport bike can rip off sub-three-second 0-60 mph times and low eleven-second quarter miles at over 130 mph. However, some riders no longer need to be the fastest on the block.

Regardless of what constitutes fast to you, the Ducati’s throttle tip-in is smooth, another plus for ease of riding. The power rolls on smoothly thanks to a slipper-type clutch. The clutch’s internals provide another benefit by better managing deceleration forces that come from quick downshifts. Oil-bathed plates absorb shift shock, helping to prevent the rear tire from breaking traction and destabilizing the bike. Unless you really know what you’re doing, you really want that lone rear tire to stay stuck.

As California suffers through its own financial crisis, one area that’s visibly hurting from the lack of cash is the state’s roads. The 796 couldn’t seem to care. It flew over road surfaces that were smooth or pocked. The chassis soaked up everything, and pleasantly surprised your author when a wheel-swallowing pothole appeared suddenly out from under a semi. The bike rode in and out of the valley of death with nary a shudder, maintaining its stability, and my record for unbroken bones.

Once in the canyons and away from the city’s concrete and semis, the Hypermotard proved that it likes its roads curvy. Away from it all, an experienced rider can power slide out of open bends. The bike’s transition from neutral to oversteer is broad and predictable. Big discs haul the bike down easily, and even without ABS, inspire confidence. Unlike cruiser-style bikes with their long forks, understeer isn’t an issue with the Ducati.

Just as there are bigger, more powerful, and faster cars than the Lotus Elise, few connect with their pilot as directly. The Hypermotard 796 is like the Elise in this manner.

For just under $10,000, the Ducati drips with style and heritage that outshines its Asian counterparts. Compared to its European competitors, the 796 provides a compelling choice for riders who consider bikes a nice addition to their lives, as opposed to being the only focus thereof.