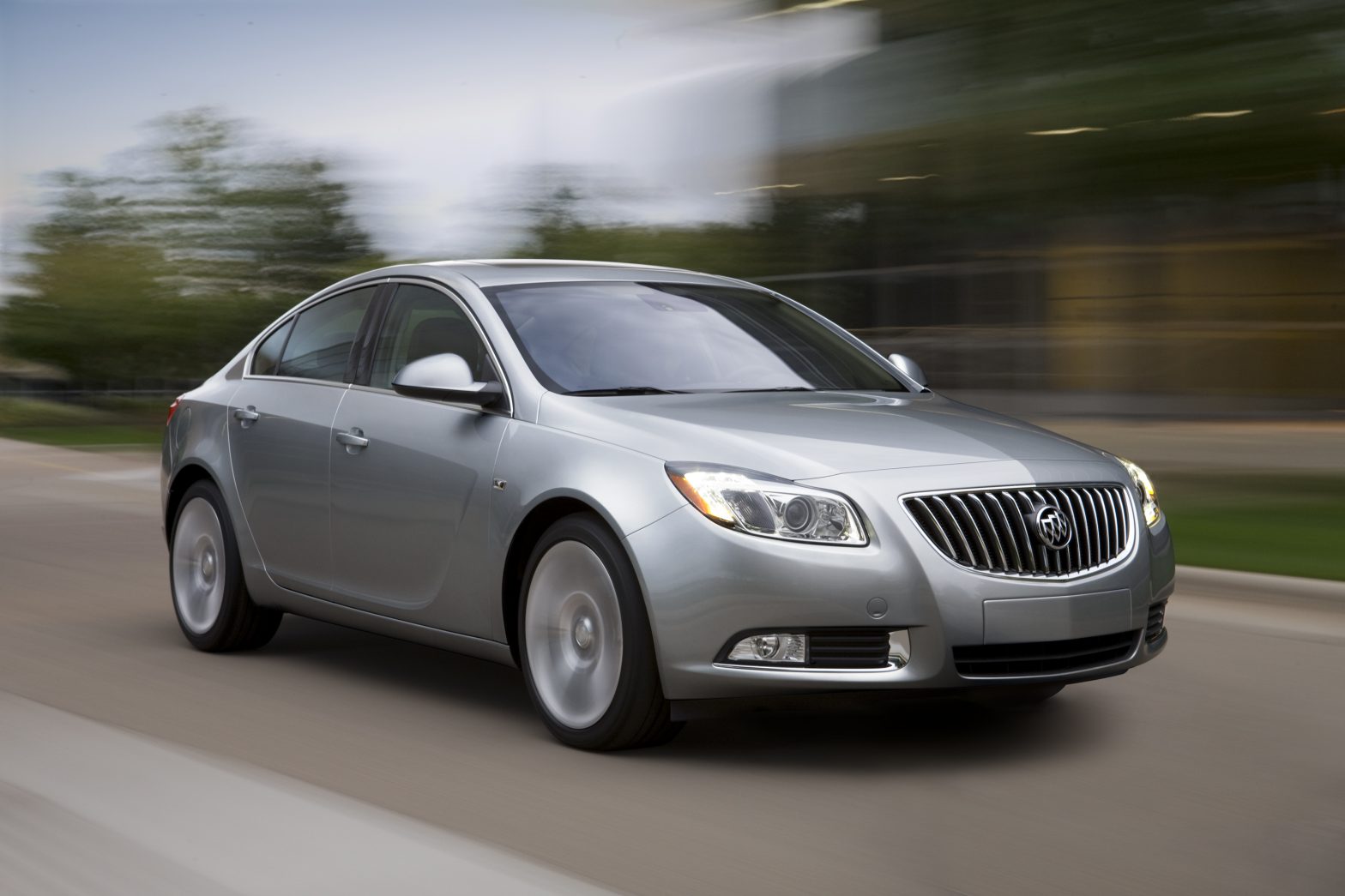 For all of you (ourselves included) who have lusted after the Opel Insignia, it looks like we’ll finally have the chance to see what the fuss is all about. As part of General Motors’ strategy to build up the Buick brand beyond its LaCrosse, Enclave, and (aging) Lucerne models, the 2011 Regal will be arriving on our shores next year, available only with four-cylinder engines and front-wheel drive.

Initially, just the naturally aspirated Regal will be available, packing GM’s trusty 2.4-liter, direct-injected four which produces 182 horsepower and is good for 30 miles per gallon on the highway. In the late summer of 2010, however, a model with the Ecotec 2.0-liter, 220-horsepower engine will roll out, mated to an all-new Interactive Drive Control System (IDCS) which allows the driver to change the suspension settings between Normal, Tour, and Sport modes. Both engines will be mated to six-speed automatic transmissions.

The Regal will come standard with many premium features, like heated, leather seats, Bluetooth, XM satellite radio, OnStar, and eighteen-inch wheels (or nineteens with the IDCS system). That, combined with the sleek styling of the Euro Insignia, should make the Regal a pretty fierce competitor for upmarket Ford Fusions.

No word on pricing has been released at this time, but we’ll keep you posted. Stay tuned for more details when this car makes its official reveal at next month’s Los Angeles Auto Show. In the meantime, click through the post to read GM’s official press release.

THE 2011 REGAL: A BUICK BRED ON THE AUTOBAHN

LOS ANGELES – On Thursday Buick will reveal the 2011 Regal sport sedan to customers in the L.A. area. Armed with turbocharged horsepower, a driver-selectable suspension system and a firm, European-tuned chassis, it delivers a driving experience that rivals the best import sport sedans in the segment.

"The 2011 Buick Regal is like nothing you’ve ever experienced from this brand," said Susan Docherty, general manager of Buick GMC. "The Regal is the next chapter in Buick’s transformation and will expand the portfolio to include a sport sedan."

The new Regal arrives in the second quarter of 2010, with its sights aimed squarely on competitors like the Acura TSX and Volvo S60. It has a longer wheelbase and greater trunk volume than those vehicles, along with standard features – including a six-speed automatic transmission, 18-inch wheels and OnStar – that aren’t offered standard on either competitor.

The Regal’s development is rooted in Germany, where the globally led engineering team created the award-winning Opel Insignia – the 2009 European Car of the Year. The Insignia has garnered more than 31 prestigious awards and is the best-selling midsize sedan in Europe. Regal will bring all of Insignia’s award-winning design, technology and European-inspired performance capabilities to the American market.

The Regal has already been a success on another continent, in China. It went on sale in December 2008 and more than 64,000 Regals have been sold there. Enthusiastic customers cite its sculpted, flowing design and responsive performance as the top reasons for purchase.

Regal at a glance

Regal will initially be offered in premium CXL trim only, with additional trim levels to be offered in the 2012 model year. The well-equipped Regal CXL includes the following as standard or available equipment:

The Regal’s sleek design blends the sweeping silhouette and proportions of a coupe in a progressive package that suggests motion from all angles. Great attention to detail complements that aggressive styling, with tailored applications of Buick’s signature design cues, such as the waterfall grille, select use of chrome trim and superior fit and finish of the exterior panels.

"Regal is all about great proportions," said John Cafaro, design director, passenger car. "For example, with the fenders flared to wrap around the tires. It’s an aggressive stance that people aren’t used to seeing in recent Buicks."

The car’s performance-oriented spirit is also conveyed in sleek, sculpted body-side detail and aggressive headlamps that further suggest motion. At the rear, an abbreviated deck and tucked-in body panels are the hallmarks of a contemporary sport sedan, with bold taillamps and their intricate lighting elements reinforcing Regal’s attention to detail. Eighteen-inch wheels are standard.

The sweeping design motif carries over to the interior, where the side panels flow uninterrupted into the instrument panel. The instruments have the look of expensive sport timepieces and are lit with ice-blue LED lights. The center stack, housing the climate and "infotainment" controls, was designed to allow for a lower, driver-centric instrument panel profile. Features such as a thick-rimmed, leather-wrapped steering wheel and firm, highly bolstered and leather-covered seats also support the sport-oriented driving experience.

"There is great design harmony between the exterior and interior," said Cafaro. "The feeling of flow and motion carries through in an engaging manner that makes you want to take the Regal out to your favorite twisting road to see what it can do."

The Regal’s finely crafted, sporty and well-appointed interior builds on the exceptional attention to detail found in the Enclave and LaCrosse, blending signature styling cues with contemporary sport sedan aesthetics.

Regal’s firm, highly bolstered seats were benchmarked against the top import competitors for comfort and support, while a standard flow-through center console offers plenty of storage for passengers in the front and back.

Smart applications of technology are also hallmarks of the Regal, including details such as a multi-function controller on the center console for operation of the audio system, navigation system and the Bluetooth phone. The faceplate for the "infotainment" screen is set at a 30-degree angle to contribute to the car’s flowing interior design.

A new era in Buick design is also seen in the satin metallic, piano black and new, Kibo-patterned interior trim materials. Kibo is a rich, dark, progressively grained wood that lends an international flair to the Regal.

Unique with its all-four-cylinder powertrain, the Regal relies on the excellent horsepower-per-liter ratio of the Ecotec engine family to deliver smart, on-demand performance that is also very efficient.

Both the standard 2.4L engine and the available 2.0L turbo use direct injection technology to optimize performance, reduce emissions and maximize fuel efficiency. The 2.4L is the same engine offered in the Buick LaCrosse, but in the smaller, lighter Regal, it delivers more agile performance. The 2.0L turbo cements the sport sedan credibility of the Regal, with on-demand power comparable to a V-6, but the inherent efficiency of a four-cylinder. To ensure responsive power across the rpm range, the 2.0L turbo uses a twin-scroll turbocharger that builds power quickly at lower rpm.

Distinct, uniquely calibrated six-speed automatic transmissions are paired with each engine. Both offer driver shift control that enhances the sporty driving feel of the Regal.

The chassis and structural systems were developed in Germany and give the Regal the handling and dynamics of a premium European sport sedan, as well as the quiet, refined ride and road manners expected of a Buick. The body structure is one of the most rigid in the segment, which is approximately 25-percent stiffer than the previous Regal. This solid structure supports more precise suspension tuning and a quieter ride.

Regal’s Interactive Drive Control System chassis technology (available on models with the available 2.0L turbo engine) offers enhanced vehicle stability and greater driving safety. It is designed to change the personality of the car based on the personality of the driver. A sophisticated driving mode control module continually monitors driving style utilizing yaw rate, lateral and longitudinal acceleration, steering wheel, throttle and vehicle speed. It defines the dynamic vehicle state, including acceleration, braking and cornering, to optimize chassis reactions. It also executes all of the IDCS driver selections.

All four dampers are electronically controlled and continuously adapt within milliseconds to the prevailing road conditions, vehicle movements and individual driving style. Chassis settings are adjustable by the driver, with Normal, Tour and Sport settings.

Selecting "Sport" mode optimizes the car for dynamic driving, tightening the suspension and steering response and speeding up the reaction of the automatic transmission. The "Tour" mode is optimal for long-distance cruising or rough road conditions, providing an increase in comfort. "Normal" or Default Mode is the perfect all-around setting for daily commuting and city traffic. The other major benefit of Interactive Drive Control is that it automatically adapts Regal’s performance settings to individual driving styles. When a driver begins to drive more aggressively it will tighten the suspension and increase steering effort and change to a more aggressive throttle response. When the vehicle senses that the driver is doing relaxed cruising, it adjusts settings for rolling smoothness and comfort.

Apart from a more rewarding driving experience, IDCS also offers safety benefits in emergency situations. For example, if an obstacle must be avoided when the car is in Tour mode, various chassis sensors convey this to the DMC and the dampers are stiffened within milliseconds, delivering greater body control.