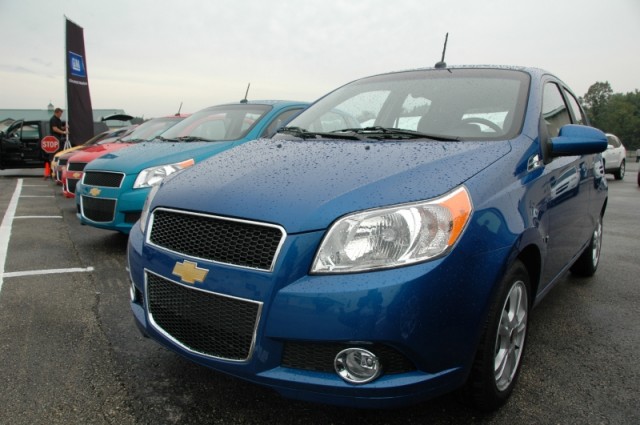 We were recently invited, along with an immodestly large group of our fellow scribes, to have our way with the whole of the 2009 General Motors lineup at the bustling Autobahn Country Club in Joliet, Illinois. And despite the siren song of several Corvette ZR1s wailing from the direction of the north track, we took the afternoon to acquaint ourselves with a vehicle that seems to have an ever increasing importance for GM’s near term future, the 2009 Chevrolet Aveo5.

The General’s smallest offering is new for the ’09 model year, and there are high hopes that the Aveo5 will enter dealerships prepared not only for the inevitable scrutiny of a new model but also to fight it out with fine small five-doors newly minted from both Honda (Fit) and Toyota (Yaris). GM Vice Chairman Bob Lutz spoke to the importance of changing the company’s model for small vehicles, pointing to the high-content, high-cost small cars on the European scene and noting that American car buyers are still in the midst of a shift that should see them ready to accept such cars in the near term.

For all the talk about the development of premium American small vehicles, it seems clear that the new Aveo will make its hay on the rate at which it sips fuel and its sticker price, rather than on its high level of “premiumness.”

At the heart of the Aveo5 is a 1.6-liter DOHC four-cylinder that is among the most fuel efficient mills that GM sells, at 27/34 mpg for the five-speed manual version. The engine also received gotten tiny power bump for the 2009 model year, from 103 to 106 horsepower, though the fiddling has dropped torque to 105 from 107 pound-feet.

If those power figures don’t sound like great news for the Aveo’s performance, it’s probably because they aren’t. Despite a respectable curb weight of 2546 pounds, the little Chevy’s acceleration can charitably be described as “unhurried.” While no strict figures were made available from the manufacturer, and noting that conditions were a long way from ideal, our primitive attempt at measuring the 0 to 60 mph time in the automatic transmission car yielded a time that was very solidly in the double digits. This may be the slowest passenger car on sale today, folks.

But speed isn’t everything, especially in the case of ultra-budget conscious small cars, and the Aveo5 certainly didn’t leave us with nothing to recommend it to possible buyers. We were pleasantly surprised at how well the suspension soaked up the miles of crumbling roads and the frost heaves that dotted our test route, offering a pliant ride befitting a much more expensive vehicle. The steering wheel may have been overly large but offered good feel and feedback, allowing us to take full advantage of the grip allotted by the rather skinny all-season tires. Aveo5 also offers standard front and side impact airbags, a tire pressure monitoring system, and an auxiliary jack to hook up your iPod.

It’s too bad that Chevy designers didn’t make out as well with the car’s interior then, as it remains mostly a pastiche of all the things that can be done wrong with small cars. For starters, it’s important to note that potential customers that measure above six-feet tall should make doubly sure that they feel comfortable behind the wheel. At 6’ 5”, your reporter had his right knee pushed up against the center console for the entire test, even with the seat all the way back on its rails and reclined as much as he could manage and still see out the windows – the big and tall set may want to look elsewhere. Cabin materials weren’t much better than cabin fit either, with the hard console plastics looking especially dreary in the lighter shades and with inexplicably placed “wood” accents highlighting them. Does anyone really expect the Aveo to have a wood-lined cockpit?

The base price of the base Aveo5 has gone up by a bit over one thousand dollars, the 2009 LS starts at $12,120, and the car is still going to be one of the most inexpensive pieces of new transportation on sale in the U.S. With added content and a better overall package, that’s good news for the GM executives who hope that Aveo can be a hit in these movable times. But with new entries like Fit and Yaris just a few thousand dollars of financing up the price line, Aveo5 may still find that it isn’t quite new enough.

Driven: We Take a 2008 BMW 335xi on Summer Vacation Through the White Mountain Range