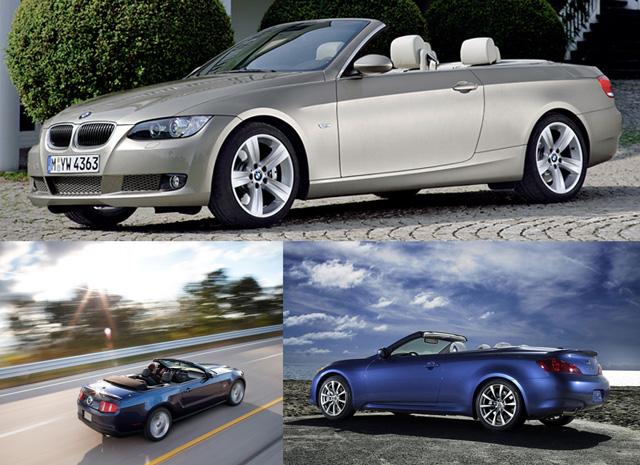 For some time now we’ve been doing brief, direct comparisons of test cars at the request of our readers. Naturally, anyone considering a car will have a short list of other cars that are considered competitive. We think the information requested has been helpful, so we’re formalizing the idea in a new series called Showdown. This is the first article in this series, so let us know what you think, in comments.

Someone shopping for a convertible around the $40k mark would probably have at least one of these cars in mind. Since these three cars are full of surprises, we thought it would be useful to cover them in Showdown format as a way of highlighting the choices buyers face. Note that to keep these three cars within shouting distance of each other, we tested the Mustang GT Premium with manual transmission against the base G37 and the base 328i convertible (which was only available for test with an automatic).

This is one of those cars where the parts are good, but the whole really gels into a something better than good. This is a genuinely fun car for everyday driving on real roads. Not only that, the Mustang seems special, in part because it is iconic, but even more because the design and materials are so well done.

The G37 is a car where the driving experience is less than the sum of the parts. When you drive the G37, nothing seems really wrong because nothing is horrible and plenty of things are well done. But a multitude of little annoyances add up to an insipid drive.

With BMW spitting out more variants of its cars every year, some of them are bound to be less than good. The 328i convertible isn’t one of those. With the smoothest BMW six in years and a typical well-sorted BMW chassis, traditional BMW virtues are on offer. That said, this is a good BMW, and a very pretty one, but not one of the great driver’s cars because the weight overmatches the engine’s output.

While not a rocket ship, the Mustang has good torque and moves off the line well. Mid-range and top end power are more than acceptable, though the strength of this car is from 1500-3000 rpm (where you’ll be operating much of the time). Thanks to the manual transmission on our test car, throttle response seemed very good.

The G37 V-6 has a strong top end and really finds its legs between 3500 and 5500 rpm. But the low end seems relatively weak. In addition, this power curve seems at odds with the automatic transmission, which has to shift too much and is often confused about what gear would suit the driver.

The 3-liter engine in the 328i is a honey. Low-end torque is decent and makes the car feel more powerful than it is. Mid-range thrust is modest, but the engine seems so happy to rev that this isn’t a huge drawback. The transmission, especially in Sport or Manual mode, seems to work well with what is on offer.

The suspension on the GT is firmed up from the base Mustang, but it is still pretty soft — even if well-damped. Nonetheless, the Mustang is well-balanced and roll is nicely controlled. Turn-in is also quite good, enhancing the fun at moderate cornering loads. The drawback of the softness is a somewhat disconnected feel. Also, the car moves around a bit more than normal as power is applied, which can be disconcerting as the pace quickens.

The G37 feels moderately firm, but this is definitely a car biased to understeer. You sense that rear roll stiffness is lower than the front, leading to the inside rear corner seeming to lift and the front outside corner having to dig in. Turn-in is acceptable.

We drove the normal suspension version of the 328i (a sport suspension is also available). Firmness is moderate, with good damping, and balance is exemplary. Turn-in is also good – probably as good as the Mustang, though the 328i doesn’t quite respond as noticeably. Compared with the Mustang and G37, the 328i rolls a little more, with the 328i giving the impression that it is carrying its weight higher.

The Mustang is far from the most connected car, but somehow it works. That’s because it tells you what is happening in the chassis by large movements, not by subtle communications about tires and road surface. This isn’t ideal, but it can be very engaging. Engine and exhaust sounds are ample, so you can aurally keep track of the engine quite easily. Even more, you’ll enjoy running the car through the gears just to hear then engine note.

The G37 chassis is designed to isolate you from the sounds and happenings at road level. You can feel weight transfer when you are pushing the car above 6/10ths, and you can hear the engine when you wring it out, but you get the feeling the designers didn’t intend for you to know. The clunky transmission doesn’t help you get into the mood.

The 328i is soft-spoken but clear communicator. Tire activity is understandable and the chassis movements come through well enough. Because the chassis is firm and well-damped, you can develop a sense of flow with the 328i that isn’t quite as easily accomplished with the Mustang. Engine sound is restricted but usable for manual shifting.

While the steering on the Mustang has less feel than we’d like, it loads up in an enjoyable way. The ratio is good, as well. The wheel looks beautiful, but we would have preferred leather at 9 and 3. The shifter is a joy, with a solid feel that makes you want to change gears. Clutch release is progressive and at the right level, and pedals are well-placed. Very good throttle response. We had a little bit of trouble finding an ideal driving position (and we dislike Ford’s aggressive headrest design).

The steering lacks feel, and the wheel is formless with oddly placed buttons. We did like the way the instrument nacelle moves with the wheel. The transmission is hard to love. Actually, it is hard to like. In D it is fine around town, though it finds itself in a higher than ideal gear too often. In DS it still hunts for the right gear, but sometimes this means the transmission is stuck too high, but even more often it just leaves the engine sitting at 4000 rpm for no apparent reason. Manual mode would seem to be your best choice and it is. But manual mode offers its own set of problems: shifter is too far back, upshift and downshift happen in the wrong direction, and shifts are not executed smoothly. Throttle response through all this is acceptable.

Steering weight is on the heavy side, which we liked but may not be to everyone’s taste. Steering feel is good. At times we thought the ratio was a little slow. The transmission is good for an automatic (manual is available). The transmission is okay in D, but in DS it works very well. Shifts happen in the right rev range to use the engine intelligently. In DS, the transmission does downshift in anticipation of the request for acceleration (nice), so this isn’t the mode for maximum smoothness around town. Manual mode is very good. The shifter moves in the right direction (pull left for M, pull back for upshift, push forward for downshift). The 328i has no paddles on the base car, but push/pull paddles are available with the sport package. Throttle response is good.

The ride comfort of the Mustang is very good for a sporting car. The relatively soft suspension isn’t soft in the luxury car sense, so ride on the road is sufficiently firm to be enjoyable. The Mustang also handles bumps pretty well. The live axle is occasionally upset, but much less than you might expect. The seats are also well designed for comfort, with good firmness and backrest shape.

The ride quality of the G37 is also quite good. Bumps might be a little more noticeable than on the Mustang, but the isolation that bothered us when driving aggressively helps out. That said, the chassis tuning isn’t as masterful as on the 328i, which smoothes out bumps a bit more. Seats on the G37 are comfortably shaped, and the firmness is chosen well. We’d rate the G37 seats just below the Mustang and about equal to the BMW seats.

This is not the top 3 Series for ride quality, but it is very similar to those standard bearers. While the 3 Series never floats, the damping takes care of bumps about as well as on any driver’s car. Occasionally on broken pavement we got the slightest sense that the chassis was a convertible (more flexible) not a coupe. The seats on the 328i are good, and the leatherette is high quality, but the seats lack the superior shape of those available on the pricier sport package.

The Mustang feels solid. It has a weighty character, with controls that feel well made. This is backed up by the very attractive design and materials used on the interior. What the Mustang lacks is a sense of refinement. This isn’t a visual thing, it happens when driving. The sound is muscular, the chassis movements are coarse and the controls are the heaviest of our three cars. That character is part of the charm of the Mustang, but delicate it is not.

The G37 goes about its business in a smoother and more fine-grained way than the Mustang. But the G37 isn’t exactly what you’d call refined. The engine has a guttural sound and feel (deep in the background). The transmission loses its way at times. The car seems solid, but only somewhat above average in this area. This mixed message is backed up by the interior. The design seems pleasant and the materials are reasonably good, but nothing really special is going on and the colors and shapes don’t quite come together.

The 328i is the refinement leader in this group. The engine has been accurately described as jewel-like because it revs so smoothly. The transmission is also smooth, but not at the expense of responsiveness. The steering feels weighty and the car overall feels the most solid. The 328i is only let down by a somewhat bland and all-too-familiar dashboard design. The materials are good, and the controls work well, it’s just that the shapes are pretty conservative. Not the worst problem.