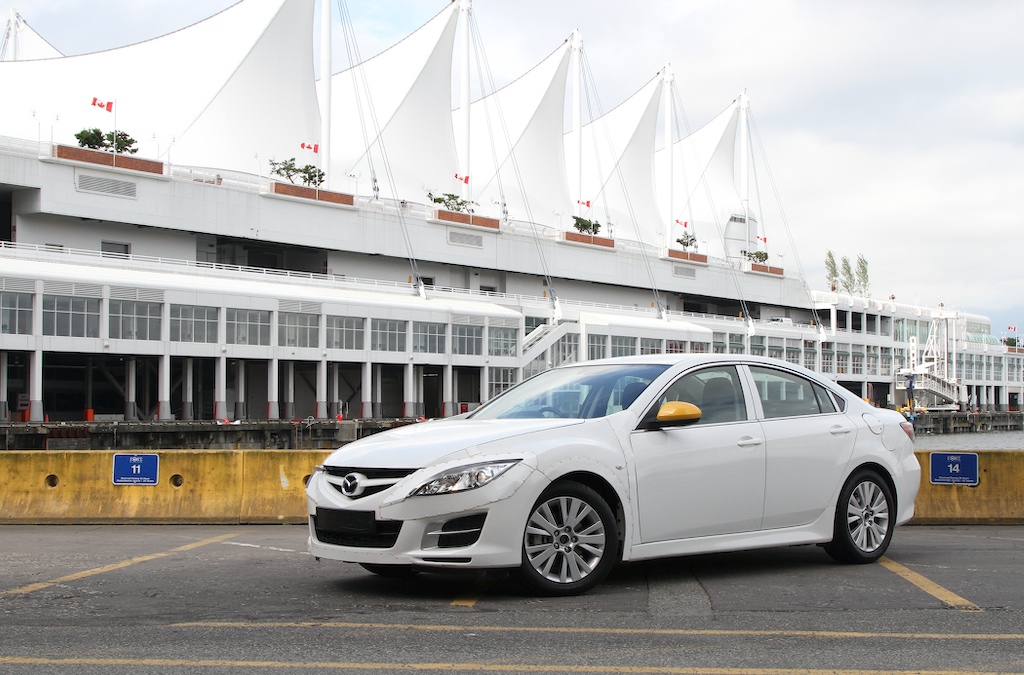 Mazda has embarked on a program of technological advancement that is pretty remarkable, and a bit exhausting to take in all in one sitting. The company is nearing the endpoint of a project it started some five years ago, one whose overarching goals were to make its vehicles cleaner and more efficient, while not throwing away the enthusiastic character that has pervaded Mazda’s lineup to date.

The result of this project is a group of technologies that have all been labeled with the same Skyactiv moniker—the touch point of a clean-sheet design ethos where engineers were encouraged to “reach for the sky.” Skyactiv now characterizes new efforts in engine, transmission, body, and chassis development.

In fact, so much substantial engineering work has been completed by Mazda, that company reps wanted to get the word out to the public before a full Skyactiv vehicle is even ready for primetime. So, while American consumers will see some of the fruits of these labors very soon—the 2012 model year Mazda3 will make use of the Skyactiv-G gasoline engine—the first “full” Skyactiv vehicle won’t be available until the launch of the new CX-5 in 2012. Further, there were no production-spec vehicles available for us to drive and test.

So, we got mules. Awesome, duct-taped, bolted-up, zip-tied, warning-lights-on, test mules. Essentially we drove Skyactiv underpinnings that were clad in current-gen Mazda6 bodies. It was, for the true car geek at heart, as exciting as driving a new supercar. Truly.

Also exciting was the substantiation of news that Mazda will bring its Skyactiv-D diesel engine to the US market. Considering how much fun we had driving the thing (read on for more), we think that Volkswagen may finally have a real fight on its hands.

Knowing that NOx and soot were issues related to higher compression ratios, Mazda abandoned the trend. Engineers conjured the concept of a lightweight diesel engine that they estimate will deliver a 20-percent fuel economy increase while meeting EU6 emissions standards. All that without any after treatments more complex than a standard diesel oxidation catalyst and particulate filter.

The idea of reduced compression ratios was not without its challenges. For example, low-compression diesels have a tough time starting and running at low temperatures. Clever and thorough engineering met the issues head-on.

The lower cylinder pressures also reduce the incidents of pre-ignition, a fact that helped Mazda engineers better control when the ignition process starts. In the Skyactiv-D, the charge ignites at top-dead-center rather than slightly after in high-compression diesels. This enables a longer power stroke, improving efficiency.

The 2.2-liter four-cylinder engine uses biturbocharging. A small unit provides quick throttle response below 2500 rpm when a valve in the exhaust manifold shifts gasses toward the turbine of the larger unit.

Fuel enters each cylinder via multi-hole Piezo injectors fed by 2200 psi of pressure. Mazda uses a stratified injection strategy that utilizes up to eight fuel pulses per power stroke.

Another benefit of the lower compression is the lower physical stresses on the engine’s structure and rotating assembly. Because of this lessened stress, the engine’s internals can be made lighter overall. Thus the Skyactiv-D engine weighs 20 kilograms less than the current diesel, including a critical 20-percent reduction in rotational mass.

Another benefit of the Skyactiv-D’s low compression is the expansion of the engine’s power band. The engine makes useful power until a petrol-like 5000 rpm, where standard diesels run out of huff after about 3500 rpm. Impressively, the new diesel also makes more power at lower rpms—about 50 more pound-feet at 1200 rpm than the old 2.2.

That Mazda engineers have worked so hard and so innovatively to make a diesel that is this clean and efficient is admirable. That they have also created an engine that is of real interest to enthusiast drivers is quite magical.

We’ve had no trouble advocating for the few diesel-powered cars on the market in the US—they tend to be a lot of fun to drive, in most situations. But, despite the addictive pop of torque that diesel offers, and that we love, the truth is that diesel-typical low redlines (and attendant lack of sonic punch) tend to take us out of the experience a bit.

So, while the added low-rpm torque and extra grunt overall is very much appreciated, the real win here is the longer rev range, we’d argue. In our short test drive of the Skyactiv-D mule, we quickly saw that the motor offered enough flat-out acceleration to compete with most of the mainstream V-6-powered sedans that we’ve driven. The biturbo setup really killed any feeling of lag down in the low revs, while mid-range thrust was hilariously strong.

Better still, the car actually sounded like a bit of a performance machine. We did notice the typical diesel-clatter from low speeds (though much of this may be tuned out when the cars are in production trim), but under a full boot of throttle the tailpipe let out a strong, loudish, rising exhaust note. We were equal parts stunned and thrilled when we first heard it, and the booming voice definitely kept us gunning the Skyactiv-D throughout our test drive.

Moving in exactly the opposite direction of its diesel engine, Mazda’s spark-ignited Skyactiv-G sports the highest compression ratio of any current production engine: 14:1 for most of the world, but 13:1 for North America because of our predilection for low-octane gasoline.

Freshmen engineering students know that for every point increase in compression, power goes up by approximately three-percent. Mazda is using this power gain to enable modest displacement downsizing.

Compared to the current Mazda 2.0-liter gas engine, the new Skyactiv-G nets a 15-percent improvement in torque and a 15-percent increase in fuel economy. This puts the new G on par with the consumption of some 2.2-liter diesel engines.

The changes made to accommodate the higher compression ratio aren’t as foundational as the diesel, but they are significant. For example, the 4-2-1 exhaust system enables more effective scavenging. The snaking, long-tube header type system places the catalyst a good distance from the exhaust ports.

For the sake of comparison with our 2.0-liter Skyactiv-G-equipped mule, Mazda brought along a current North American-spec Mazda6 with a 2.5-liter four.

It’s fair to say that the difference between the new engine and the outgoing one was less compelling in the gasoline-powered group than in the oil-burners, but that, in and of itself, is pretty remarkable. Down a full half-liter of displacement, the Skyactiv-G felt no less powerful than its predecessor, while wanting to rev harder, and respond more quickly to requests from our right foot. The bigger, older motor may have offered just a hair more urgency from low-rpm, with more torque in evidence, but hardly enough extra to make up for its overall lack of refinement and efficiency when compared with the new G engine.

Of course, many a talented engine has been hamstrung for enthusiasts by a sub-par transmission. Thus, Mazda’s Skyactiv program included the development of a new six-speed gearbox that would mesh perfectly with the impressive powerplants. Two versions of this MT conveniently match up with the torque requirements of the Skyactiv-G and –D engines.

The team wanted a gearbox that shifted like the unit standard in the MX-5 Miata. It started by shortening the shift throws of its current manual by 5mm. The shift span for the unit is now just 45mm (1.8 inches).

The internal shift mechanism uses gravity to help speed and lower the effort of downshifts.

Weight came out of the more compact transmission by designing first gear and reverse to use the same idling gear. Additionally, second and third gears use the same input gear, allowing the length of the secondary shaft to be reduced by 20-percent. Overall weight is down 24.2 pounds compared to the old unit.

Being longstanding fans of the MX-5’s gear-changer, we were as excited to try out the new Skyactiv MT as we were the new motors, if we’re honest. Of course, we didn’t completely expect that simply operating the new transmission would be far more challenging than we’d hoped.

You see, Mazda brought its prototypes all the way from Japan for our test drive event in Vancouver, which meant that the Mazda6 mules we had available were all right-hand-drive vehicles. Now, driving an unfinished test mule, over a very short span of time, to glean driving impressions about new technology is a bit challenging in its own right. Doing so on the wrong side of the car, in downtown Vancouver traffic, without drifting into the wrong lane or clipping an unsuspecting side-view mirror is another thing entirely.

With all of that as preface: we did get the hang of wrong-side driving enough to put some thought into the new manual sixer. The unit is, if not quite as fast as the MX-5 gearbox, easily quick enough to put it up amongst the best in this class. Light, easily accurate throws meet with a solid-but-not-heavy clutch for gear-changing action that is really first-rate.

We need more time with the MT to be able to rank it really fairly, but the early returns are overwhelmingly positive.

Mazda engineers set out to create a faster-shifting automatic that matched the efficiency of modern dual-clutch gearboxes.

Their path included the use of a smaller torque converter that only operates to get the vehicle moving from a rest and below six mph. The converter remains locked during all other driving. In the US fuel economy cycle, the converter is locked 88 percent of the time, helping improve fuel economy 4-7 percent.

A multi-plate clutch more efficiently manages the small speed differentials that a larger torque converter would have.

Quicker shift action performance results from a redesigned hydraulic solenoid pack that is controlled by an integrated electronics pack. Single- and even triple-cog downshifts all happen in under 0.15 seconds, faster than some current DCTs.

On the roads surrounding Vancouver, the new Skyactiv 6-speed automatic drove as advertised. WOT resulted in direct, crisp shift performance. Light throttle applications brought about smooth, gentle acceleration and comfortable gear changes. The gearbox’s shift logic also seemed robust, and although we tried to get it to stumble—being caught in the wrong gear or having a shift delayed due to electronic and hydraulic indecision— the new transmission worked flawlessly. Particularly impressive were the multi-gear downshifts made possible by having all of the input gears on the same shaft.

There is, of course, a lot more that could be written about our day of test-car driving. But the fact is that a lot of what we experienced could very probably change. (We begged the Mazda folks on hand to leave the steering tuning along—it was that good—but we can’t be sure they’ll take our advice.) What’s more, because our prescribed route was so straight, and so short, we didn’t get much opportunity to suss out handling specifics. No matter. If the production versions of Skyactiv cars show as much adherence to the core Zoom-Zoom philosophy (in other words: fun driving) as these test mules, we’re in very good shape.