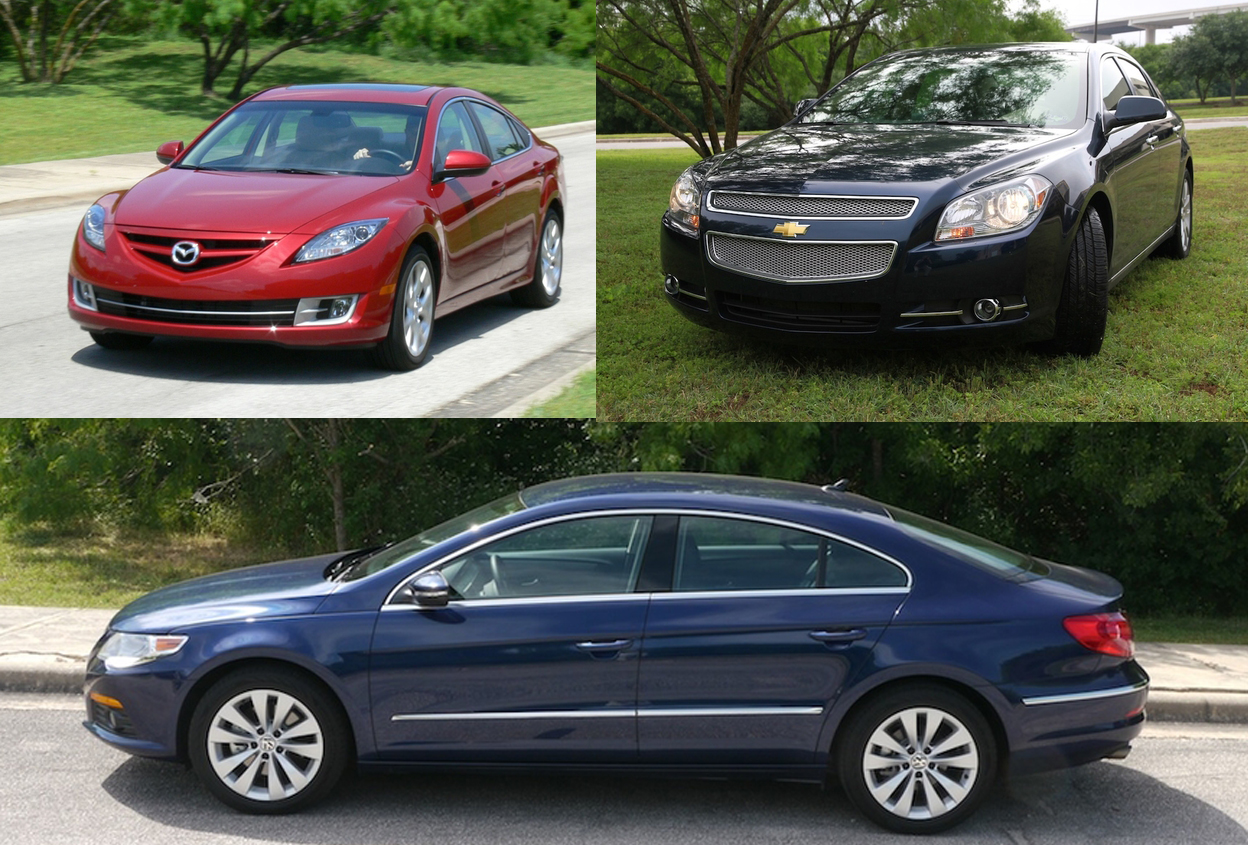 What do $30K sedans tell us about the state of mass-market car-making, circa 2010?

Funny you should ask, since we just completed our third straight week of driving mid-sized sedans. All had prices, comparably equipped, just a tick under $30K. And our cars happened to come the three leading auto-producing nations: Japan, Germany and the United States. So while we can’t do a full-on comparison of sedans in this price range, we thought this was an excellent opportunity to address the aforementioned question and comment on what we saw—surprises and otherwise.

Is there hope for GM?

Frankly we’d say yes, based on the Malibu LTZ. That said, there is a long way to go to grow the business, but the long way requires some explanation.

When you drive the Malibu and a car like the Mazda6 back to back, you begin to appreciate how far Chevrolet has come. It isn’t hard to list the areas where the Malibu is a more desirable car.

For starters, the Malibu is a little bit bigger, making the rear seat more useable for adults. Trunk room is noticeably bigger too. Yet the Malibu isn’t unwieldy, in fact we’d say it generally has a more grippy and planted feel than the Mazda. Ride quality on the Malibu is also pretty good, and we can see some people favoring its stable magic-carpet-ride approach over the confusing tippy-but-firm approach taken by Mazda.

The Malibu is also a more handsome car to many eyes. The exterior not only looks better, it looks more substantial, with an air of quality that the Mazda simply doesn’t have.  If you didn’t know the brand, more than 50% of consumers would say the Chevy was the more expensive car.

This feeling, with an important caveat, continues on the inside. The switchgear and materials on the Malibu just seem to be higher quality. This is a theme we’ve begun noticing in the past year or two. While we’ve been ooing and ahhing about Audi and Land Rover interiors, the Japanese have fallen behind on fit, finish, and detail design. And Mazda is not the bottom of the barrel here; in fact they’re pretty good members of the Japanese pantheon.

The caveat is that even though it looks like Chevrolet actually paid more attention to design than Mazda did, the general Malibu aesthetic seems to be trying a little too hard. The colors, the brightwork, and the shapes might not be conservative enough for the intended buyer (that, or Chevy really has a tight and well worked out market segmentation and our informal clinic didn’t contain those people).

When it comes to the drivetrain, the Malibu works well enough, but there are chinks in the armor. Compared to the rather gutless Mazda V-6, the Malibu engine at least appears to have some torque below 2500 rpm. Still, you won’t choose the Malibu for its sense of power. Part of the reason is that the transmission, probably to prop up EPA numbers, likes to get into a very high gear quickly and then resolutely stay there. That makes the Malibu seem somewhat unresponsive.

Chevrolet, uniquely in this group, saw fit to provide paddle shifters so that you can control the proceedings if you don’t like the basic programming. But, as often happens with automatics, shifts occur with an alacrity befitting plate tectonics more than modern machinery, so the driver is seriously discouraged from getting involved. And (pet peeve alert), Chevrolet has managed to rack up four of the paddle shift no-nos: the shifters are push/pull rather than the standard pull right/pull left, the push and pull are in the wrong direction, the paddles are microscopic, and there is no console alternative. Unlike styling, user interface design is not a place to be different just for the sake of brand identity.

While that’s a minor issue for the target market, it is part of the larger issue for GM. GM would do well to provide fewer minor bad design elements as points of criticism in what are otherwise rather good cars. No doubt that is easier said than done, but in essence, GM’s problem is that it has to make cars that seem obviously better than the competition, because it is fighting brand perception that is decidedly worse than the competition. The Malibu is about as good as the competition, at least as represented by the Mazda6, but if we were GM we’d like to come away with less feeling that the Malibu is just different and more feeling that we prefer it.

How to do it right

GM (or Mazda for that matter) could do worse than to study the VW CC. Sure, we’re not the target market for any of these cars, but when we did our informal clinics, the verdict was obviously tilted in favor of the VW. That’s because the CC stands out as being different by (mostly) being better than other $29K cars in some fairly basic ways.

It starts with the drivetrain. VW makes the audacious assumption that buyers actually have central nervous systems in addition to brains. As a result, they equip the CC with a turbo-four instead of a V-6. The 2.0T in the CC feels vastly more punchy and responsive than the V-6s, despite being down on spec. Every driver of our test CC immediately commented on this. The CC gets off the line a little better, but once underway you are in the meat of the torque curve and the CC feels very willing and fun.

This whole experience is helped along by VW’s decision to use a dual-clutch automated manual transmission rather than a conventional automatic. The VW feels more hooked up so that throttle inputs are met with an immediate “yes, sir!” rather than a “huh?”. The two shift patterns provided by VW are also helpful, though we’d like to see better programming and a set of paddles for manual shifting (or a better console shifter). The Germans struggle with details, too.

These decisions also lead to a big advantage for the VW in fuel economy. While the Mazda and the Chevy are in the mid-twenties, the CC offers 31 mpg highway and a 5-mpg advantage in the city. Faster feeling and more economical seems like an obvious win.

When it comes to design, VW manages to be different, while remaining fairly conservative. The CC appears to be more expensive and of higher quality than either the Malibu or the Mazda6, particularly on the interior. This is achieved with both design and materials choices, but it isn’t obvious that this is anything other than more good decision-making.

In the handling arena, we’d say the VW is mid-pack, but nothing to worry BMW. It doesn’t feel quite as light or refined as the Mazda, but it seems more planted. It doesn’t seem quite as heavy or disconnected as the Chevy. We prefer it to the other two in ride and handling, but mostly by process of elimination.

When you net it out, the VW CC really stands out: more fun, better economy, higher sense of quality, distinctive but not outré design. That’s the kind of formula we’d like to see applied more often, rather than trying to just make a reliable appliance.

Formula SAE: The Olympics of Motorsports?