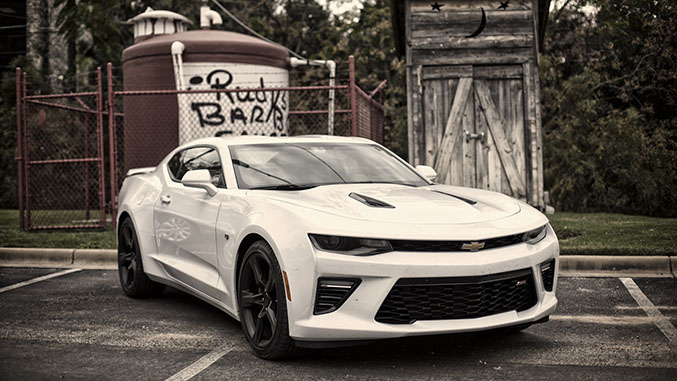 Images by Studio Mahoney
When a manufacturer launches a new model they normally invite journalists out to a specific location to drive it. These media programs are usually held under somewhat controlled circumstances on what essentially amounts to a large driving loop, routing you through the roads they want you to go through and avoiding the ones they do not. Sometimes this is done for the express purpose of avoiding the potential shortcomings of the vehicle, like suspension that might be too harsh on some surfaces or an engine lacking guts in certain situations.
But the folks from GM took a different approach with the launch of the new Camaro, and decided to do something completely unexpected for of the all-new sixth generation car: They handed us the keys in New Orleans and said “See you in Dallas.” And with that, our 700 mile road trip in a new V8-powered SS model, equipped with a manual gearbox, began right there.
What’s the idea behind the 2016 Chevrolet Camaro SS?
Upon first glance it might not look like a dramatic departure from the fifth-generation model it replaces, but the new Camaro is a very different car underneath the skin. Seventy percent of the parts used in its construction are all-new to the model, and much of this sweeping change can be attributed to the fact that the Camaro has moved from the Holden-based platform that underpinned the fifth generation car and onto one that it now shares with the Cadillac ATS.
Standing alongside the outgoing model, the dimensional differences are immediately noticeable – the new car is substantially smaller, sort of a 9/10ths scale version of its former self. It also continues its slow transition away from the bulked-up muscle car nostalgia aesthetic and – much like the Ford Mustang – moves closer to a traditional front-engine sports coupe configuration.

In terms of size, it’s now closer in line with something like the BMW 4-Series rather than with big grand tourers like the Dodge Challenger. As such, it has also lost quite a bit of weight – approximately 220 pounds for our SS tester versus a similarly equipped last generation model, and paired with the new direct-injected LT1 V8 for the Corvette Stingray, it boasts a 14% improvement in its power-to-weight ratio. It’s noticeable.
And like the Ford Mustang, the Chevrolet Camaro strives to be all things to all people – from a cool looking and reasonably engaging commuter car at base level to a thrilling sports coupe with luxury features and cutting-edge technology at the upper end of the scale. In the past the Camaro has been accused of being the poor man’s Corvette, and nowhere is it more apt – and more complimentary – than in this new SS model.
For the first time ever GM’s Magnetic Ride Control adaptive suspension can be optioned to the SS model, while four-piston Brembo brakes grace all four corners as standard. And for cars equipped with the optional six-speed manual gearbox, active rev matching – a feature that was first introduced on the seventh generation ‘Vette – is also along for the ride.
How does the drivetrain perform?
Paired with the optional dual-mode active exhaust system, you’d be hard pressed to discern the difference between the 455 horsepower LT1 used in the Stingray versus the one found in the new Camaro SS by the sound alone. The SS is now seriously quick as well – sixty miles per hour from a standstill happens in four seconds flat for SS models equipped with the 8-speed automatic, while those who prefer to row their own will cross the line a few tenths slower for the privilege at 4.3 seconds.

Not much was lost in the transition between the C7 Corvette’s engine bay and the new Camaro SS’s – the LT1 still trumpets its thoroughly American soundtrack with authority and generates gobs of naturally aspirated torque throughout the power band while doing so.
The Camaro’s three-pedal setup is reminiscent of the system used in the Cadillac ATS-V, and in similar fashion to the Caddy and the Corvette, active rev matching can be toggled on and off on the fly via the paddles on either side of the steering wheel.
The clutch on the Camaro SS strikes a solid balance of being light enough to be hassle-free in traffic while also providing enough resistance to avoid feeling spongy and vague, while the shifter feels tight and well sorted, and its clearly defined gates never had us searching for a gear along our journey.
How does the Camaro SS handle?
While years of tuning and upgrades turned the fifth generation Camaro Z28 into a venerable giant killer on the road course, the handling of sixth generation Camaro SS impresses right out of the gate, boasting 0.97 g cornering capability on Goodyear Eagle F1 Asymmetric 3 run-flat tires which measure 245/40ZR20 up front and 275/35ZR20 in the rear. Paired with the optional adaptive suspension, which provides Tour, Sport and Track modes, the SS was ready for anything we threw at it – it happily clipped off hundreds of miles in Tour mode, soaking up uneven pavement, bridge joints, pot holes and miscellaneous road maladies with little drama, even keeping things stable when we got on the power on poorly maintained roads.
Sport and Track driving modes not only stiffen up the dampers (when equipped), they also increase steering weight, heighten throttle sensitivity, and uncork the optional exhaust system more often, giving each mode a genuine sense of purpose, and switching modes on-the-fly is accomplished by simply toggling the mode selector switch just in front of the shifter.
When approaching twistier sections, a quick switch to Track mode put the SS on the ready, tensing the aforementioned systems up for more urgent response. Autocrossers and those who will be tracking their cars regularly will undoubtedly opt for more substantial suspension componentry, but the new Camaro SS proved to be a highly capable performer right off the factory floor.

It’s a similar story with the brake system – a Brembo four-piston setup at all four corners that gets the car to a stop from sixty miles per hour in 117 feet. That kind of stopping power is more than enough capability for the majority of buyers, but for those who require more performance, the aftermarket (and Chevrolet themselves) will inevitably offer ways to enhance it even further.
How are the design, materials, and fit when you see the car in person?
Spending as much time as we did with the 2016 Camaro SS while traversing the Louisiana swamps, Texas plains, and many of the twisty back roads in between, we had plenty of time to consider the new look of the car. GM explains the new design as “more athletic-looking” but “unmistakably Camaro”. While its panels may sport a more sculpted style than the outgoing car, it is perhaps the least adventurous Camaro redesign we’ve seen yet.

That isn’t entirely bad news though – some of it is a result of GM’s efforts to achieve parity with the current Ford Mustang, and on the whole, the new Camaro does appear more upscale than the car it replaces, even if it’s less likely to turn heads than some other members of its competitive set (and perhaps the car it replaces).

Inside, Chevrolet’s efforts to improve interior quality and ergonomics prove largely successful, boasting higher quality materials, a more aesthetically pleasing layout, and a host of modern infotainment features like Apple CarPlay and 4G LTE hotspot capability.
Taller drivers will still find visibility somewhat compromised – craning one’s head between the steering wheel and the top of the windshield to see the signal at a stop light will still be a requirement on occasion, and rear visibility is still less than ideal – though the standard rear-view camera does help substantially during parking lot maneuvering.
Bottom line
Styling quibbles aside, there’s little doubt that this is the best Camaro SS ever to come out of GM’s factories – it stops, goes, turns, and tours with a level of competence we simply don’t usually expect at this price range. All in, our tester rang up a total of $46,080. That’s within spitting distance of a well optioned Mustang GT with the Performance Package, and a few thousand shy of a Dodge Challenger SRT 392.
Compared to the Ford, the SS boasts adaptive suspension, an active exhaust system, cylinder deactivation, and a host of other features that aren’t available on the Mustang GT. The Challenger fairs better in terms of feature set comparisons, but the Camaro will handedly outpace the Challenger when the subject changes to performance dynamics outside of a straight line sprint.

Porsche Takes The Wraps Off The Cayman GT4 Clubsport