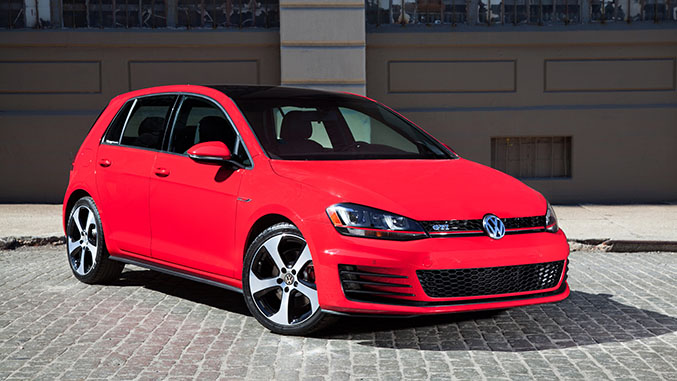 The seventh generation Golf GTI, denoted as "Mk7", has been racing around the streets of Europe for over a year now, but we here in the U.S. have had to sit idly by, waiting our turn for a go in VW’s newest iteration of the car that put the hot hatch segment on the map. Now, that wait is finally over. The new GTI sees a number of changes over its predecessor, including a more spacious cabin, a direct-injected engine boasting both additional power and improved fuel economy, and a new, lighter platform. But does it ultimately add up to a better car?
What’s different this time around?
The seventh generation Golf is the first to utilize VW’s MQB modular component group, which is less a platform and more of a core system of interchangeable parts which are shared across VW’s transverse, front-engined, front-wheel drive vehicles. While this might be seen as a cost-cutting measure – which it is, to a degree – this flexible architecture also yields the new GTI up to 82 pounds of curb weight reduction.

To go along with this new architecture and diet, the GTI is propelled by a turbocharged and direct injected 2.0-liter inline four cylinder engine which offers an output of 210 horsepower and 258lb-ft of torque, up 10hp and 51lb-ft from the outgoing model. A six speed manual gearbox is standard, while VW’s dual clutch, paddle-shifted DSG transmission is optional.
Our tester was also fitted with the optional Performance Package, which brings larger brakes, bumps horsepower up 10 ponies to 220, and adds an electronically controlled limited slip differential into the mix as well.
What’s it like out on the road?
The most obvious change from the Mk6 that we noticed upon setting off in the new GTI is the engine. While the motor in old GTI certainly got the job done, the new mill offers a noticeable improvement in torque at lower revs, though the turbo’s presence, which really comes on around 3800rpm or so, is more obvious than in the previous generation GTI. Despite the additional twist, we’re happy to report that torque steer has been improved in the Mk7 GTI to a degree in which concerted attempts to coax the motor to tug at the steering wheel proved fruitless – something which could not be said for the Mk6. Throws of the shifter bolted to the six-speed manual gearbox are short and pleasingly precise, and the GTI’s light clutch proved easy to modulate and hassle-free while navigating San Francisco’s mid-day traffic.
The GTI also gets a new variable-ratio electric power steering system this year, a unit which ramps up steering response as the wheel moves off-center. We found ourselves enamored with the well-weighted and precise feel of the new setup when compared to that of the previous generation’s unit, and that aforementioned steering weight can also be adjusted via the driving modes (Normal, Individual and Sport) to suit the driver’s taste.

The brakes included as part of the Performance Package offer great pedal feel and ample stopping power, and when put to use alongside the torque vectoring wizardry of the electronically controlled differential, the Mk7 GTI provided a commendable level of confidence to our spirited driving sessions through the backroads of the East Bay near North Richmond.
While the standard suspension is a well-sorted compromise between reasonable compliance and flat, responsive handling, the $800 optional adaptive damping system is well worth the extra coin. Comfort mode included here allows the suspension to soften up things substantially, which makes living with a sport-tuned car like the GTI in areas with poorly maintained roads a far easier task. Body roll and vertical motion are still put in check here, despite the increased compliance, and Sport mode remains at the ready to firm things up when it’s time for the fun stuff.
How is the design?
If one thing could be gleaned from the Mk7’s redesign, it’s that VW appears to have been fairly pleased with the look of things last time around. So subtle are the changes made to the seventh generation Golf and Golf GTI over its predecessor that those without a fairly well-sorted understanding of the GTI’s history might not realize this is a different generation of the car. But, as is often the case with thoughtful design evolution, it’s the details that take paramount importance here.

Externally, the curves found on the Mk6 have given way to more chiseled design, bolstered by the GTI’s more aggressive front valance and bodykit tweaks that help differentiate it from the more pedestrian Golf offerings. Inside, the story is much the same, with a flat-bottomed steering wheel and GTI-specific instrument panel giving the car a generally sporty feel, while the material quality used remains some of the best in the segment. Plaid cloth seats, a tradition of the GTI for decades, remain along for the ride (leather is optional), as does the golf ball-style shift knob for those who opt for the manual gearbox.

Final thoughts?
VW brought along an example from every previous generation of the GTI for journalists to compare back-to-back with the new car. After driving each of them, we discovered some of the engineers’ thought process along the way. Saying that a lot has changed since the Mk1 would be a massive understatement, but while the design has evolved and the GTI has gotten bigger, heavier and much more powerful in the process, what has remained is the intangible sense of fun that a GTI provides, and the Mk7 is certainly no exception to the rule. Ultimately, it looks as though the model that put the hot hatch segment on the map is still the one that knows the winning formula by heart.
2015 VW Golf GTI
Price: $24,395 (base), $26,915 as tested
Engine: Turbocharged 2.0-liter I4
Output: 220hp, 258lb-ft (equipped with the Performance Package)
0-60mph: 6.5 seconds (estimated)
Curb weight: 3031 pounds
Fuel economy: 25 city / 34 highway
On sale: Now
Tags:
East BayGTIPerformance PackageSan Franciscosport-tuned car

Five Items to Improve Your Day at the Track