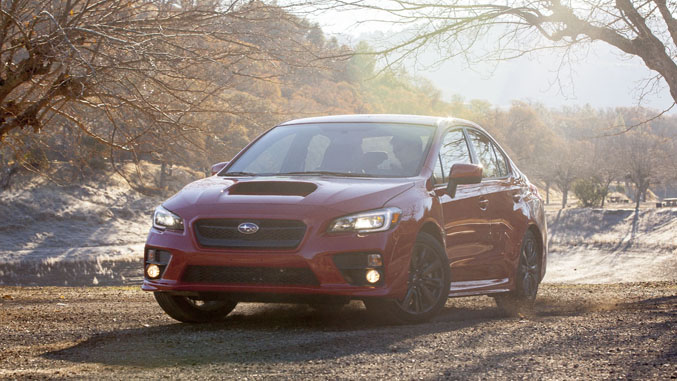 It’s with a slight amount of trepidation that we approached the new WRX. After being wowed by the concept earlier this year at the New York Auto Show, we were a bit deflated by the final result which, while still unmistakably a rally-bred Subaru, lost quite a bit of its overt aggression in the transition to production form. What’s more, Subaru has chosen to nix the 5-door wagon variant from the playbook and add an optional CVT transmission to the mix. Add to that the unknown commodities of the engine, chassis, suspension and brakes – all of which are new for the 2015 model – and our concerns are likely understandable. Fortunately, nearly all of that anxiety went right out the window once we got a chance to put the new ‘Rex through its paces on the twisty backroads of Napa Valley.
Externally, much has changed. Gone are the previous generation’s bulging fenders and endearingly quirky bodykit, replaced by a more sculpted, purposeful presentation. 2.2 inches wider than the Impreza from which it’s derived, the WRX sports unique fenders, quarter panels, rear doors, bumpers, lights and hood. While the new WRX is unlikely to be ever mistaken for a Pagani Huayra, not all of the attitude that we were so enamored with from the concept car managed to escape, as the chiseled front clip and rakish stance retained by the production model keep the car’s aesthetic in line with what Subaru fans have come to expect from the sports sedan. Closer inspection reveals a number of interesting tidbits, like the new hood scoop that’s been redesigned to improve outward visibility (which gets a notable improvement), a rear decklid spoiler which reduces drag, and aerodynamics that aid fuel efficiency.

Inside, Subaru’s intention to bring the new WRX upmarket is clear. Material quality sees a notable improvement, and the interior feels noticeably roomier than the outgoing model, in part due to the one-inch longer wheelbase of the new WRX, as well as Subaru’s decision to ditch the dual-arch instrument panel design of the old car in favor of a more efficient layout. A 4.3-inch LCD screen atop the center stack provides various information including performance data, audio and Bluetooth info, and also serves as a backup camera. The new, smaller diameter flat-bottomed steering wheel feels great in hand and the seats, which now use a separate headrest instead of an integrated design, are well bolstered and remain comfortable during extended sessions of spirited driving.
Turn the key and you’re greeted by that distinctive boxer growl, which is now more prominent by way of a revised exhaust system (which you can hear for yourself in the video at the bottom of this page). While we’re certainly fans of the Subaru’s unique rumble, it should be mentioned that specifically in the CVT-equipped vehicle – which tends to stay in lower rpm ranges when in full-auto mode – there was a slight, but noticeable, amount of exhaust resonance in the cabin. Though not a deal breaker and easily defeatable by way of the radio, it’s worth noting simply due to the fact that because of how CVT transmissions function, you’ll be spending a lot of your time in that resonant range when not paddle shifting the car.

In terms of propulsion, the WRX gets a new direct-injected 2.0-liter motor based off the unit used in the BRZ. However, unlike the BRZ, this mill gets a twin-scroll turbocharger and intercooler, which results in 268 horsepower at 5,600 rpm and 258 lb.-ft. peak torque at 2,000-5,200 rpm. Throwing the new six-speed manual transmission into gear and getting up to speed, the generous mid-range grunt of this engine quickly eradicates any fears that the new car might be slower than the outgoing machine. However, we did notice that the sacrifice for that mid-range torque appears to be the loss of a step or two as the motor approaches redline.
Speaking of the six-speed, we found the throws to be short and fairly precise, and when paired with the nearly lagless power delivery of the new motor, it made short work of the demanding, mountainous sections of Highway 121 – even when we neglected to downshift for a particularly sharp hairpin here or there. We did find ourselves wanting for slightly more substantial clutch feel, if only to make engagement and disengagement a more tactile affair.
After a number of years off the docket, an automatic transmission is again available by way of Subaru’s own Lineartronic CVT. In fully automatic mode, it behaves much like any other CVT, finding an optimal rev range and staying there for the most part, regardless of vehicle speed. In Sport mode, the CVT is programmed to act more like a traditional transmission, and will step-shift between "gears" based on how much throttle is applied. In Sport Sharp mode, the CVT acts like an eight-speed automatic, allowing you to decide your own shifts via the paddles on the steering wheel. While we doubt many WR readers will opt for this transmission, we’re pleased to report that it all works well enough. "Shifts" were made quickly when called upon, but we did find ourselves wishing they had opted to emulate a six-speed auto rather than an eight, as we were required to perform an overabundance of shifts to keep the car in the right rev range when driving quickly through the varied sections of PCH just west of Santa Rosa. Further exaggerating the issue, the paddles themselves are rather small and lack substantial physical feedback that makes using them rapidly and repeatedly less rewarding than we’d like it to be.

Highway 121 and Pacific Coast Highway in Sonoma County contain some of the most demanding stretches of road in California, and provided the perfect venue to discern whether or not the new WRX delivers on the claim that Dominick Infante, national manager of product communications for Subaru USA, made when he stated that the new car is the "best handling WRX ever." Subaru tells us that torsional rigidity has been increased by more than 40 percent and that the entire suspension system has been heavily revised, resulting in 20 percent less body roll and better lateral acceleration than the outgoing STI model – the latter of which certainly raised an eyebrow or two.
We pushed the new ‘Rex hard through corner after corner, and regardless how much we overcooked a turn or tried to boil the tires coming out of an apex, the WRX stayed neutral and planted, reassuring us that we could continue to explore the limits of the car without the constant concern that we might find ourselves flying backwards off a cliff. Subaru says that they used cars like the Porsche 911 as a benchmark when tuning the steering response of the new WRX. As a result, response here is accurate and quicker than before with a 14:5:1 ratio, though the electronically-assisted unit in use now does give up some feedback when compared to its hydraulically assisted brethren.
WRXs of yesteryear tended to be somewhat softly sprung, and with the added chassis stiffness doing much of the heavy lifting here, Subaru has wisely chosen not to alter that formula too dramatically. Well dampened and reasonably complaint during normal driving on city roads, but also able to careen over a bridge expansion joint at speed without a hint of drama, simply put, the handling of the new WRX is sublime.
Pricing for the new WRX has not been announced, but we’ve been told not to expect it to change much from the outgoing model. At that price point, the WRX makes a strong case for itself. It likely won’t cause a lot of head turning when they begin to arrive in showrooms in the first quarter of next year, but then again, that’s never been Subaru’s primary concern. When function trumps form, great things can happen – like the 2015 Subaru WRX.
2015 Subaru WRX
Engine: 4-cylinder, horizontally opposed, turbocharged/intercooled
Output: 268 hp/258 lb-ft
Weight: 3,267 lbs. (6-speed manual) / 3,433 lbs. (Sport Lineartronic)
Fuel Economy, 21/28/24 (6-speed manual) / 19/25/21 (Sport Lineartronic)
On Sale: April 2015
Tags:
2015SubaruWRX