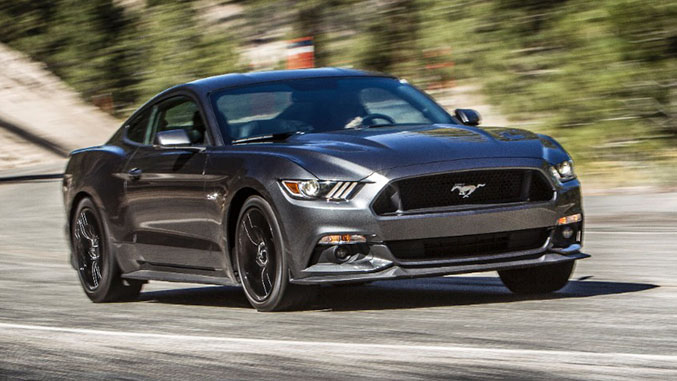 Fifty years ago, Ford took the style of a European coupe and fastened it to the bones of the Ford Falcon and created the first pony car. More than nine million examples later, the Mustang is a legitimate icon of Americana, and its massive popularity has created an aftermarket so healthy that one phone call can get you everything you’d need to turn otherwise stock vehicle into a corner carving road racer or a 9-second drag strip beast. Marking its 50th anniversary, Ford has made some fairly sweeping changes to the car, including the first application of an independent rear suspension ever in the standard Mustang (SVT’s brief flirtation with the idea in the 99-04 Cobra models notwithstanding), an all-new look inside and out, and a new turbocharged four cylinder EcoBoost model now on offer, recalling the beloved Mustang SVO of the 1980s. 2015 also marks the Mustang’s entry into the European market, which brings with it a whole different set of challenges and buyer expectations. Earlier this month we took to the back roads of Malibu to find out if the 2015 Mustang GT has the goods to attract newcomers into the fold while still keeping its rabid fanbase happy.
What’s the idea behind the 2015 Ford Mustang GT?
While the original notion of the Mustang as “the secretary’s car” quickly changed as the muscle car era of the late 1960s spawned attention-grabbing high performance oriented models like the Mach 1, Boss 429, and Shelby GT500, the concept of the Mustang as a highly modular vehicle still holds true today. The idea of an accessible car that’s fun to drive appeals to everyone from teenagers to grandmothers, and Ford’s goal with the Mustang is to offer a version that can appease each of them. For 2015, the V8-powered GT model will be the top of the performance food chain, using the 5.0-liter mill from the ’14 model with a modest bump in power. The GT model also sets itself apart from the lower models with an uprated suspension, bigger brakes, more aggressive bodywork, and larger checklist of standard equipment. 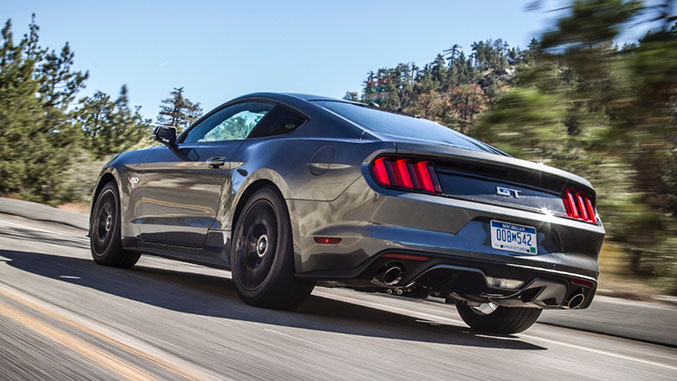 Who might want a car like that?
Starting at $32,100 for a base GT, the Mustang is a compelling high performance option for the money. Cross shoppers will likely also have the Chevrolet Camaro and the recently refreshed Dodge Challenger on their radar. But even beyond the standard pony car competition, those considering a Subaru WRX, a Volkswagen GTI, or a BMW 435i could find themselves persuaded into the driver’s seat of this new Ford as well.
How does the new Mustang GT handle?
While the change to a fully independent rear suspension is a welcome one that was a long time coming, it doesn’t arrive without a caveat or two. Most notably, the weight of the Mustang has gone up by about 200 pounds, and a GT equipped with the Performance Package, as our tester was, now clocks in at over 3800 pounds, putting it significantly closer in terms of bulk to its pony car rivals.
It’s not all bad news though, as the new IRS also brings the Mustang in line with the Camaro and Challenger in terms of ride quality as well, which is up substantially from last year’s solid axle design, and yields a car which is less bothered by mid-corner bumps and high speed undulations.
While the Mustang feels slightly less eager to turn in this time around, grip from the GT’s Pirelli Pzero summer tires remains excellent, and handling remains largely neutral until you start to dip into the throttle during corner exit. Refined is perhaps the best way to describe the new suspension setup – while it loses a bit of urgency in the process, it gains more composure, and in turn bolstered our confidence to push the car without unexpected results coming back to bite us at an inopportune time. 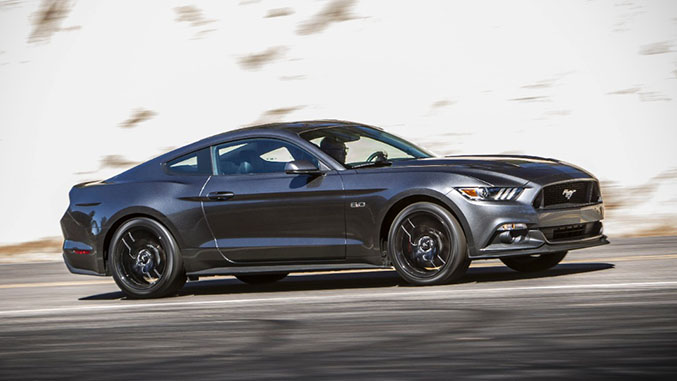 The GT Performance Package includes six-piston Brembo brakes, a 3.73 Torsen differential, and optimized chassis and stability control tuning. With it, Ford says the GT will run faster laps around a race course than the venerable Boss 302, a car which has earned a reputation for hitting above its weight class on the road course. While the new car doesn’t necessarily feel any faster from the driver’s seat, that element of suspension refinement and predictability has undoubtedly made the car easier to dance with at the limit.
How does the drivetrain perform?
The Coyote 5.0-liter modular V8 returns this year, and a few tweaks have bumped output to 435 horsepower and 400 lb-ft of torque. Ford’s modular V8 in naturally aspirated form has never been overly generous with low end torque, but the car now feels properly motivated even from low RPMs. Moreover, the deficit of bottom end grunt relative to some of its contemporaries makes launching the car without getting lost in a billow of tire smoke a noticeably easier proposition. But higher up in the rev range is where the 5.0 really shines, with strong midrange pull that stays linear all the way to redline. 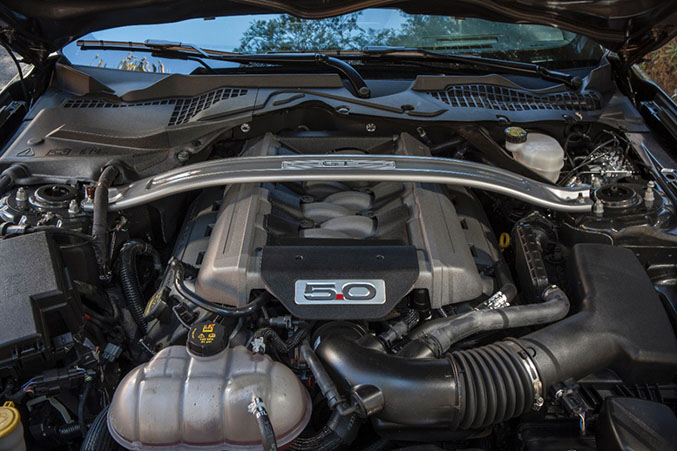 Paired with the six-speed manual transmission, the Mustang GT is genuinely rewarding to drive, with a solid, precise shifter and a well-weighted clutch that made acclimating to the car an effortless task. As has been tradition in the past with the GT, only hints of how good the 5.0 sounds are offered to the occupants, and even that is likely due to clever methods of piping sound into the cabin. Regardless, if you liked the way last year’s 5.0 sounded, you won’t be disappointed here – but you may want to consider setting a few extra bucks aside for an aftermarket exhaust system.
How comfortable is the 2015 Ford Mustang?
While the interior of the Mustang hasn’t really been anything one needed to apologize about since the debut of the outgoing model a decade ago, 2015 sees numerous improvements to material quality and overall presentation. The retro flourishes found in the previous car are largely eschewed in favor of a modern, almost aeronautical theme, highlighted by a set of bright toggle switches situated next to the button-push start, which can only be pressed up instead of down for some reason. 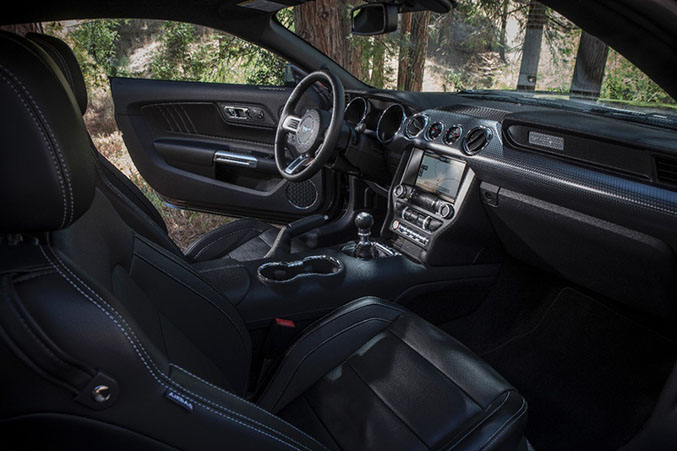 Our tester came equipped with Recaro sport seats – and option which should be on the checklist of anyone who plans to drive this car spiritedly. These buckets provide excellent lateral support and kept us planted regardless of what sorts of shenanigans we got into with the GT, but of equal importance, they also provide enough back support and comfort to be perfectly acceptable for long distance driving as well.
How are the design, materials and fit when you see the car in person?
If one thing can be said of the Mustang’s new exterior, it’s that nearly everyone seems to have a passionate opinion about it. “Polarizing” was probably not a word used in the pitch meeting for the ’15 Mustang’s final form, but nonetheless there’s no shortage of vocal enthusiasts on the internet with something to say, loudly, about the new pony car’s look. We’d admit to expectations of a slightly more daring design with all the hype leading up to the announcement of the car, but we can also confirm that in person, the new model looks considerably more athletic than the outgoing model. 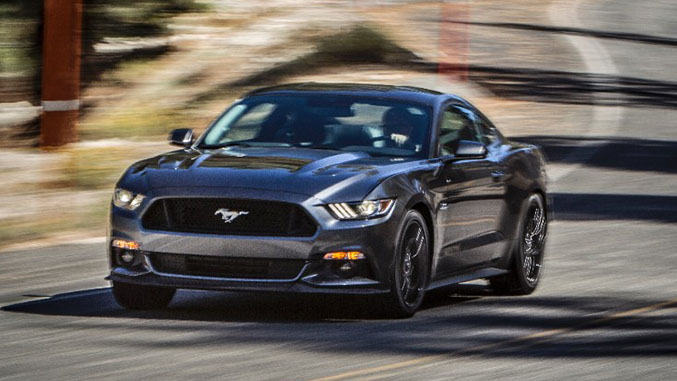 While we’re usually skeptical of claims like the following, it’s worth mentioning that the car seems to have much more presence in person than the pictures would suggest. And of course, like all the Mustangs before it, the aftermarket will answer the call from enthusiasts who yearn for more aesthetic aggression if needed.
Anything else?
Like the old saying goes, competition is a good thing. Continued pressure from Chevrolet and Dodge has resulted in a Mustang that has finally come to full maturity, offering the performance, ride quality, interior presentation and features that puts the Mustang back in the running among the best that the industry has to offer in the segment. But maturity often means sacrificing some things you hold dear, and while the Mustang can’t escape those concessions, the finished product improves upon the former so substantially that it would be shortsighted to harp on trivialities. No matter how you contextualize it, the bottom line is that the new GT, as equipped at $44,290, offers more features, more comfort, a new design and better track times than the Boss 302 did for roughly the same amount of money. If that’s not a significant accomplishment, we don’t know what is.
2015 Ford Mustang GT
Price: $32,100 (base) / $44,290 (as tested)
Engine: 5.0-liter DOHC V8
Output: 435 hp @ 6500 rpm / 400 lb-ft @ 4,250 rpm
0-60 mph: 4.4 seconds
Fuel Economy: 15 city / 25 highway
Tags:
FordGTMustangPOV car video 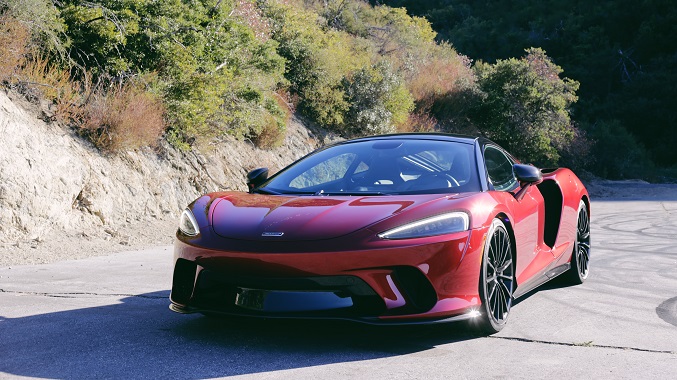 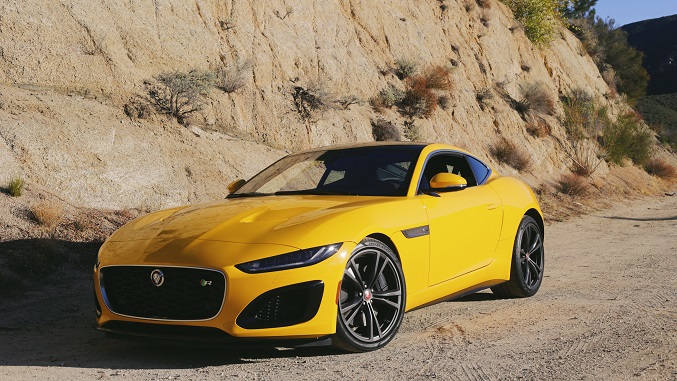 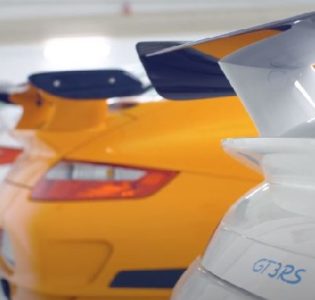 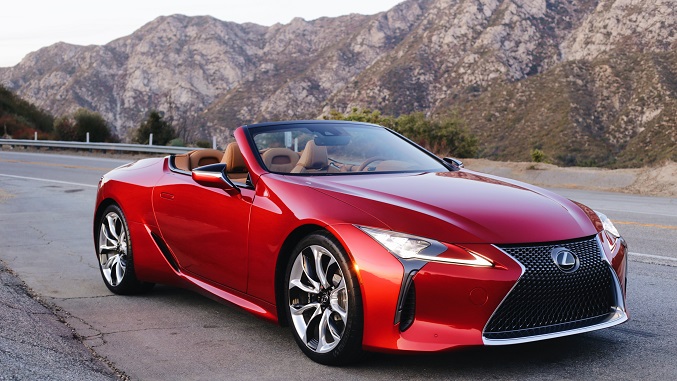