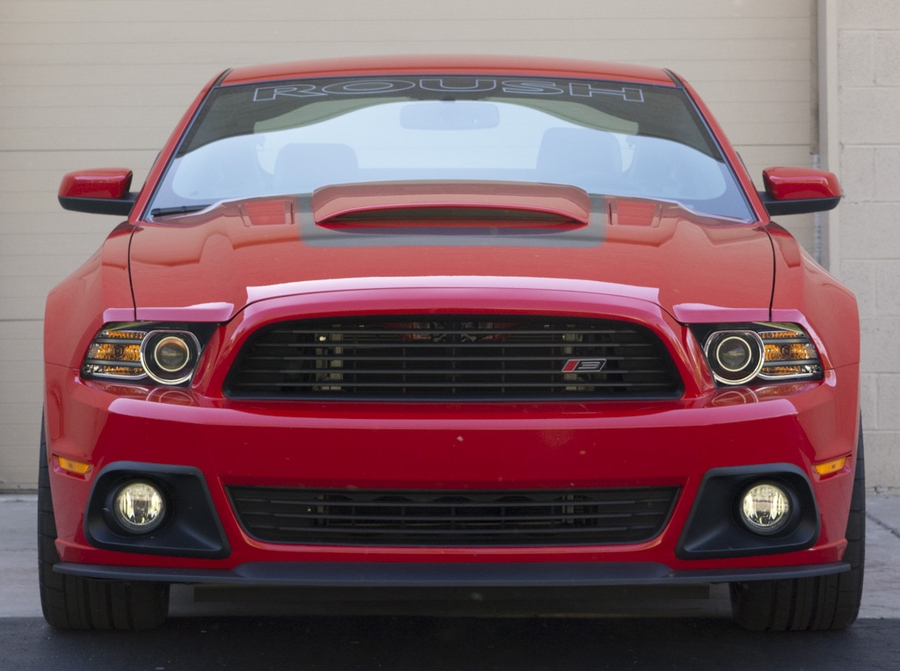 —Lake Orion, Michigan
It’s not a huge secret, but we’re big fans of both modified Ford Mustangs and the work done by the team at Roush.
The Mustang’s combination of 5.0-liter V-8, the lowest curb weight in the muscle car segment, and factory options that tuners love (we’re looking at you Recaro seats and Brembo brakes), make Ford’s pony car a tempting canvas for everyone from autocrossers to track-day specialists to drag racers and drifters. The Mustang’s classic good looks certainly don’t hurt its case either.
Roush, meanwhile, has been doing solid work on Blue Oval products for some time. It just announced that it’d be turning its wrenches on the hot Ford Focus ST, and its SVT Raptor program is constantly growing. And of course, the tuning shop is famous for the work it does on the Mustang range.
[Click here to read our review of the 2013 Chevrolet Camaro 1LE]
We sampled the Roush Stage 2 a few years ago and thought the suspension work done by Roush should be standard from the Mustang’s Flat Rock, Michigan factory. There’s also a Roush RS that tweaks the aesthetics of the V-6 Mustang to look like its more potent brethren, and a Stage 1 package that makes similar changes for the V-8 model.
But we aren’t here to talk about the lesser models. We borrowed one of the hottest Mustang’s Roush produces—the Roush Stage 3.
The Stage 3 takes all that’s good about the Stage 2 (performance-tuned suspension, sticky Cooper tires, and Roush-spec body kit) and adds a 2.3-liter supercharger, special intake manifolds, an intercooler, cold-air intake, and a Roush ECU.

Now notice we said “one of the hottest” instead of “the hottest.” There are actually three different models, or “phases” as Roush calls them, available for the Stage 3.
Phase 1 is the lowest level of power, with just 575 horsepower and 505 pound-feet of torque. Phases 2 and 3 rip out the standard 5.0-liter V-8 and replace it with a Ford Racing “Aluminator” crate engine. Power jumps up to 625 in the Phase 2 and 675 horsepower in the Phase 3, making the most potent Roush Mustang more powerful than the Shelby GT500.
For our loan, we opted for the tamest model, the Phase 1. Our goal was to determine if Roush could do what the GT500 didn’t, and become a more powerful version of the beloved Boss 302 and easily best the Chevrolet Camaro ZL1.
Well, we hate to burst your bubble, but given the option between our Stage 3 and the Boss 302, we’d take the Boss.
When we first tested the RS2, there was no Boss 302. The hottest model you could get was a 550-horsepower Shelby GT500, which like the standard Mustang GT, had a rather uninspired suspension.
So naturally, the Roush’s tweaked springs, shocks, struts, and sway bars felt worlds better than what was coming from the factory. With the Boss 302, though, Ford pulled out the stops and built one of the best handling and most talkative Mustangs ever.
Now, the places have been switched. The Boss is how we want the Roush to feel. That’s not to say that the Roush’s performance-tuned suspension is bad or should be avoided. If you aren’t able to snag one of the rare Boss 302s, this is certainly the next best thing.

The two main factors that differentiate the Roush’s handling from the Boss 302’s are the amount of vertical motion and the way the body leans in the corners. There’s more body roll in the Roush, and it doesn’t feel quite as flat mid-turn. Shod with super-grippy, 20-inch Cooper RS3-S tires, the level of grip provided by the RS3 is excellent. So while the outright handling abilities of the Roush might be higher than the Boss 302, the level of confidence it inspires in its driver is lower.
Strangely, we noticed quite a bit of vertical motion in the Roush over uneven stretches of road. It wasn’t floaty, but like the way Roush corners, it didn’t inspire confidence.
Although it’s partly down to the substandard seats of the Roush (mildly tweaked,  reupholstered stock Mustang seats rather than the awesome Recaros), feedback wasn’t as abundant on the Stage 3.
Combined with the Mustang’s rather vague steering rack (which remains unmodified), interpreting grip levels laterally, fore, and aft were difficult. The way the body rolled should have been more communicative, but we often found ourselves hanging onto the steering wheel rather than focusing on what the car was doing. Do yourself a favor—if you order a Roush Stage 3, make sure you select the Recaro seats for the donor car.
This is starting to sound mighty negative, isn’t it? Let’s change that up, though, and talk about the engine.
Ford’s 5.0-liter V-8 is hands down one of our favorite engines on sale today. Its 420 horsepower and 390 pound-feet of torque are complemented by a high redline, accessible power peaks, and a throaty, mechanical sound. So when it’s already this good, you can imagine the effect a supercharger, new exhaust, and a bunch of other internals have on it, right?
It’s fast. It is very, very, very fast. Power is everywhere—low, high, and in the middle. Dive into the throttle at nearly any engine speed in any gear and the Roush will respond to your inputs with a noisy uproar and a suddenly shifting landscape. Adding the supercharger hasn’t just made the power easier to get at or added a buttload more thrust, but it’s also made for a faster-revving mill.
The six-speed manual remains unchanged, save for a classy black cue-ball shifter. The clutch is as easy to work as ever, even with the higher degree of power flowing through it. The 5.0’s linear throttle tip-in is unchanged, making for an fast vehicle that is also quite tolerable in daily driving. At speed, the shifter has a friendly, mechanical feel. The gates, though, seemed more difficult to operate which resulted in a few botched shifts (we fully accept that this could be the result of your author being a bit ham-fisted).
More overwhelming than the speed is the way the Roush sounds, thanks to its new exhaust. Simply put, this is the only thing that turned heads faster than our tester’s bright red paint. This car is loud. Even at idle, there’s a deep, bassy note that builds into a raucous bark at speed. It’s a hoot if you’re doing nothing but driving hard, but at freeway speeds and with the windows up there’s more than a bit of droning.
The upgraded exhaust also completely drowns out the whine of the supercharger, which may be its biggest offense. Part of the joy of a supercharged V-8 is the maniacal whine that comes from just in front of you as you drive along. Maybe it’s just us, but we missed that quality in the Stage 3.
Roush maintains a full-time upholsterer that manages tweaks for the cabin. That means there’s one man refitting the steering wheel with Alcantara suede and redoing the seats with the Roush-specific touches. It certainly adds a bespoke feel to the cabin. The steering wheel could be a carbon copy of the one found on the Boss 302, which is hardly a bad thing. It’s big, but the rim is reasonably thin, which combined with its size gives it a classic muscle car vibe.
The other big tweak for the cabin was the optional removal of the rear seat, just like on a Boss 302 Laguna Seca. A meaty, painted X-brace sat in the rear seat’s place. The lack of back seats left a rather expansive area of carpeting and wasted space, so were it our choice, we might avoid this one.

There was an issue during our week with the Stage 3. Living in southeastern Michigan and in a town that has a General Motors’ assembly plant and is a hop, skip, and a jump from Chrysler’s Auburn Hills Tech Center means the concentration of car enthusiasts is high. This can be a double-edged sword, as there are some genuinely wonderful, friendly, knowledgeable gear heads that you can run into on any given day. Drive around in a fast, rare, or expensive car and you’ll often be met with a thumbs up at a stoplight or a few questions in the parking lot. We got a fair amount of that during our time with the Roush.
What we also got was every Chad, frat bro (full disclosure: your author is a reformed frat bro), dimwit, and yes, police officer, in the area pestering us at every opportunity. This was not waving or thumbs up or innocent questions. This was unsafe driving, tailgating, attempts at provoking a race, or generally just being a jackass. In the cop’s case, it included a ticket for being tailgated by a tatted-up clown on a motorcycle. This is hardly the fault of Roush or the car, but is something to keep in mind if you’re in the market.
The Roush Stage 3 starts at $17,000 on top of the cost of the vehicle. This allows some degree of wiggle room with the price, depending on if you select things like the Recaro seats, Brembo brakes, navigation system, or upgraded stereo. The minimum price for an RS3 takes the bare Mustang GT ($30,900) and adds the $17,000 Stage 3 package, for a starting price of $47,900.
That’s about $6900 less than an unoptioned, 662-horsepower GT500. In our minds, this is not a hard decision. Like the ZL1 that we picked as the winner of our muscle car comparison, the Roush Stage 3 makes better use of its power and is generally a better driver’s car. It doesn’t hurt that the RS3 is going to be far more rare than the GT500 in the coming years.
As for the Boss 302, the waters are murkier. If you’re able to find a new Boss, there’ll almost certainly be a hefty dealer markup on it. If it costs less than our Stage 3’s base price, we’d probably be inclined to go with the slower, but more enjoyable Boss 302 (although finding a cheaper Boss is, as we said, unlikely).
In trying to best the Camaro ZL1, the Roush runs into the same issues that plagued the GT500. It’s simply not as competent a driving instrument, despite how fun it actually is to drive. The ZL1 feels more composed and better balanced when pushed hard, not to mention it inspires more confidence overall.
Roush’s latest, greatest Mustang is perhaps only a victim of what we expected it to be rather than what it is. It is a blisteringly fast, visually and audibly loud vehicle that is about as rare as Mustangs can be. It’s the kind of vehicle that, despite the existence of better alternatives, is going to put a huge whopping smile on your face every time you drive it. That trait alone makes it a winner.
2014 Roush Stage 3 Ford Mustang GT
Engine: Supercharged V-8, 5.0 liters, 32v
Output: 575 hp/505 lb-ft
0-60 MPH: 4.0 sec (est)
Weight: 3600 lb (est)
Fuel Economy, City/Hwy: 12/20 mpg (est)
Base Price: $47,900
As Tested: $67,830
Tags:
Chevrolet CamaroFordGT500Mustang

Base Versus Loaded: 2014 Jaguar F-Type