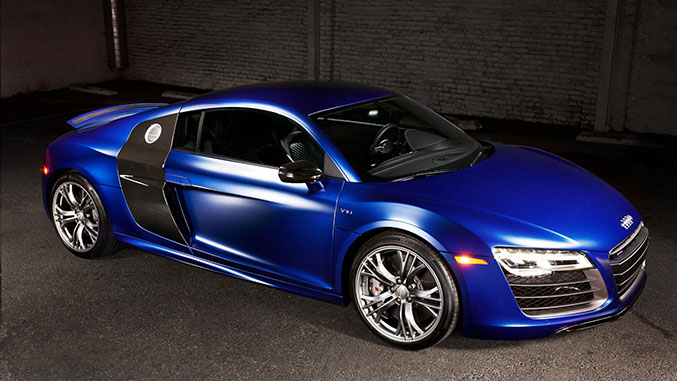 photos by Felix Salazar
The supercar, on a conceptual level, is an enticing proposition – a purpose built performance vehicle with exceptional capability and a striking aesthetic – a car that brings a sense of occasion to even the most mundane driving task. In practice however, there’s a multitude of situations where that formula is less than ideal – like when you’re hobbling along in traffic or when forced to traverse through some unforgiving city streets, for instance – and it becomes clear that the supercar formula was really designed for use under ideal driving conditions. But therein lies the brilliance of the R8 V10 Plus, because Audi has actually found a way to make it all work, satisfying just about every need that an enthusiast could want in a sports car while somehow also giving the R8 enough adjustability, subtly, and good manners to make this a supercar you could legitimately use every day.
What’s the idea behind the Audi R8 V10 Plus?
In many ways, one could look at the R8 V10 as Audi’s interpretation of the Lamborghini Gallardo. The two cars are motivated by nearly identical engines, R8’s platform is based on the Lambo’s, they use the same manual gearbox, and various mechanical bits and pieces are shared between the two. But since this is Audi’s take on the vehicle, and a decidedly Germanic one at that, it has a distinctive character that downplays the Italian flare for a more pragmatic and, dare we say, sensible interpretation of the supercar.
Who might want a car like that?
In terms of performance, the R8 V10 Plus can hang with the best of the breed. The Audi could be reasonably cross shopped with the likes of the Porsche 911 Turbo S, the Dodge Viper, the forthcoming Chevrolet Corvette Z06, the outgoing Mercedes-Benz SLS AMG, and at far end of the price range, even the Ferrari 458 Italia.

The R8, though its engine sits in the middle rather than the rear, perhaps most closely follows the 911’s approach to the supercar of the bunch, utilizing all wheel drive, relatively subdued styling, and just as much engineering emphasis on around-town behavior as on track prowess. For those who are willing to part with about $200K for a supercar, but would prefer one that doesn’t shout about it on a full-time basis, the Audi really doesn’t have a whole lot of competition to contend with in the segment.
How does the drivetrain perform?
The R8 V10 Plus uses a 5.2-liter, direct injected V10 that outputs 550 horsepower and 398lb-ft of torque, up 25 horsepower from the standard V10 model and more or less identical in output to the now-retired Lamborghini Gallardo LP 560-4.

While not overtly torquey from idle, Audi’s Quattro all wheel drive system gets the power to the pavement with remarkable efficiency, and when coupled with near-instantaneous shifts of the new S-tronic seven speed dual clutch gearbox, as our tester was, the R8’s pull from a dead stop is nothing short of breathtaking. The V10 Plus gets from a standstill to 60 miles per hour in a very repeatable 3.3 seconds, and sounds very much like the exotic wail of the Gallardo while doing it. The latter is especially true in Sport mode which, along with sharpening throttle response and altering the transmission’s shift schedule to keep the motor in the powerband, opens up the exhaust system to the full song of a proper supercar.
However, with Sport mode off, the R8 is surprisingly well behaved around town, flying below the radar sonically and happy to lope along at low RPMs without lurching around or bouncing you off the seat with every gear change. Sport mode does truly transform the car with the press of a button, and it certainly comes in handy when you’re ready to have fun. However, because of the number of different alternations made between Normal and Sport modes, the ability to create a custom preset of all these changes is sorely missed. For instance, it would be nice to have the ability to actually hear that V10 wail without having to fully commit to the tense responsiveness of Sport mode when you simply want to hear the wonderful sounds this engine makes. Since this sort of customizability is already available in other Audi models, we fully expect that such a feature will make its way into the redesigned 2016 R8. In the meantime, it’s also not a massive task to simply toggle between the two modes when the mood strikes you.
How does the R8 V10 Plus handle?
Perhaps the single most striking aspect of the R8 is that the steering is nearly without flaw. Perfectly weighted, turn-in could best be described as "surgical" with the car simply going exactly where it was instructed to without additional process or argument from the chassis. With its engine in the middle and power sent to all four corners, the R8 is simply a joy to drive hard down a challenging canyon road.
The V10 Plus uses a static dampers rather than an adaptive set, and the suspension system has clearly been dialed in to provide eminently flat cornering and admirable composure over mid-corner bumps at speed. Unsurprisingly, it comes at the cost of some civility around town, as the stiff setup was noticeably bouncy when asked to handle potholes and other common pavement imperfections at low speed.

The standard cross-drilled and ventilated carbon ceramic brakes of the V10 Plus were more than up to the task of shaving off speed in a hurry when necessary, and both pedal feel and stopping power remained consistent no matter how much abuse we threw at the V10 Plus. These capable stoppers could probably also use a dose of around-town refinement as well though, as we noted that the abundance of top of the pedal bite got a bit tiresome around town, and excessive brake noise was prevalent whether the discs were warmed up or not.
How comfortable is it?
Another aspect where supercars often fall short of ideal is in the realm of comfort. Aside from the aforementioned around-town bounciness of the suspension, the R8 V10 Plus is actually a very comfy place to be, highlighted by the well-bolstered and yet very comfortable sport seats.

When left in Normal driving mode, the R8 behaves much like a typical Audi sports sedan – quiet with excellent isolation from road and wind noise, and the more muted throttle response and smoother shifts of this mode make the R8 surprisingly easy to live with for a typical commute.
We also took note that with the R8’s short hood and fairly unobtrusive A-pillars, outward visibility is quite good as well, although rear visibility is unavoidably a bit compromised due to the engine living directly behind the seats. However when parking, the situation when this issue would be most noticeable, the R8’s rear-facing camera largely alleviates the problem.
How are the design, materials, and fit when you see the car in person?
2014 sees a refresh of the R8, including a new set of LED headlights and some minor reworking of the front and rear facias. The R8’s external design, though now more than 8 years on, still doesn’t really seem dated, and our tester’s optional Sepang Blue matte paintwork served to highlight the R8’s relatively understated but none-the-less exquisite bodywork. The V10 Plus also gets an abundance of carbon fiber bits both inside and out – enough to shave 66 pounds of the V10’s curb weight while upping its visual appeal in the process.

Inside, our tester sported optional diamond stitching, an optional alcantara headliner, and an overall sense of opulence – until we fired up infotainment system.
While we’ve bemoaned the dated feel of other Audi infotainment systems in recent models, nowhere is the offense as egregious as it is in the R8. Visually, the system looks as though it has not received an update since the R8 debuted in 2006, and technologically, the story is largely the same. For instance, Bluetooth audio streaming – a feature that can be found on nearly every car that’s been on sale for the past 3 or 4 years, regardless of price – is completely absent on the R8, and the system has neither a USB port or a standard 3.5mm audio jack, opting instead for Audi’s proprietary MMI port, a pair of SD card slots, and a CD player. If you have a newer mobile device which isn’t supported by the MMI system (ours was not, even with an adaptor), you will not be able to send an audio signal from it to the car’s stereo by any means. This is, quite frankly, a bit ridiculous in this day and age on vehicle with a sticker price nearing $200,000.
But, as Audi would likely point out, there are many ways to focus your attention elsewhere, like the sound of the engine at full roar, or how the flat-bottomed steer wheel fits perfectly in hand, or the fantastic little touches like the lights in the engine bay that put the V10 on display like a priceless jewel for a few seconds after you’ve locked the car. It is, above all else, a supercar after all.
Anything else?
While it isn’t without flaw, the R8 V10 Plus truly has it where it counts. It definitely shows signs of being due for an update, and we already know a redesign is on its way which will likely bring corrections to the fairly minor foibles we came across. But in terms of Audi’s mission to create a supercar with genuinely thrilling performance that you could actually use, comfortably, on just about every day of the year, the 2014 R8 V10 Plus is virtually peerless.
2014 Audi R8 V10 Plus
Price: $179,645 (base) / $197,795 (as tested)
Engine: 5.2-liter direct injected V10
Output: 550hp / 398lb-ft
0-60mph: 3.3 seconds
On Sale: Now
Tags:
Audiaudi r8POV car video