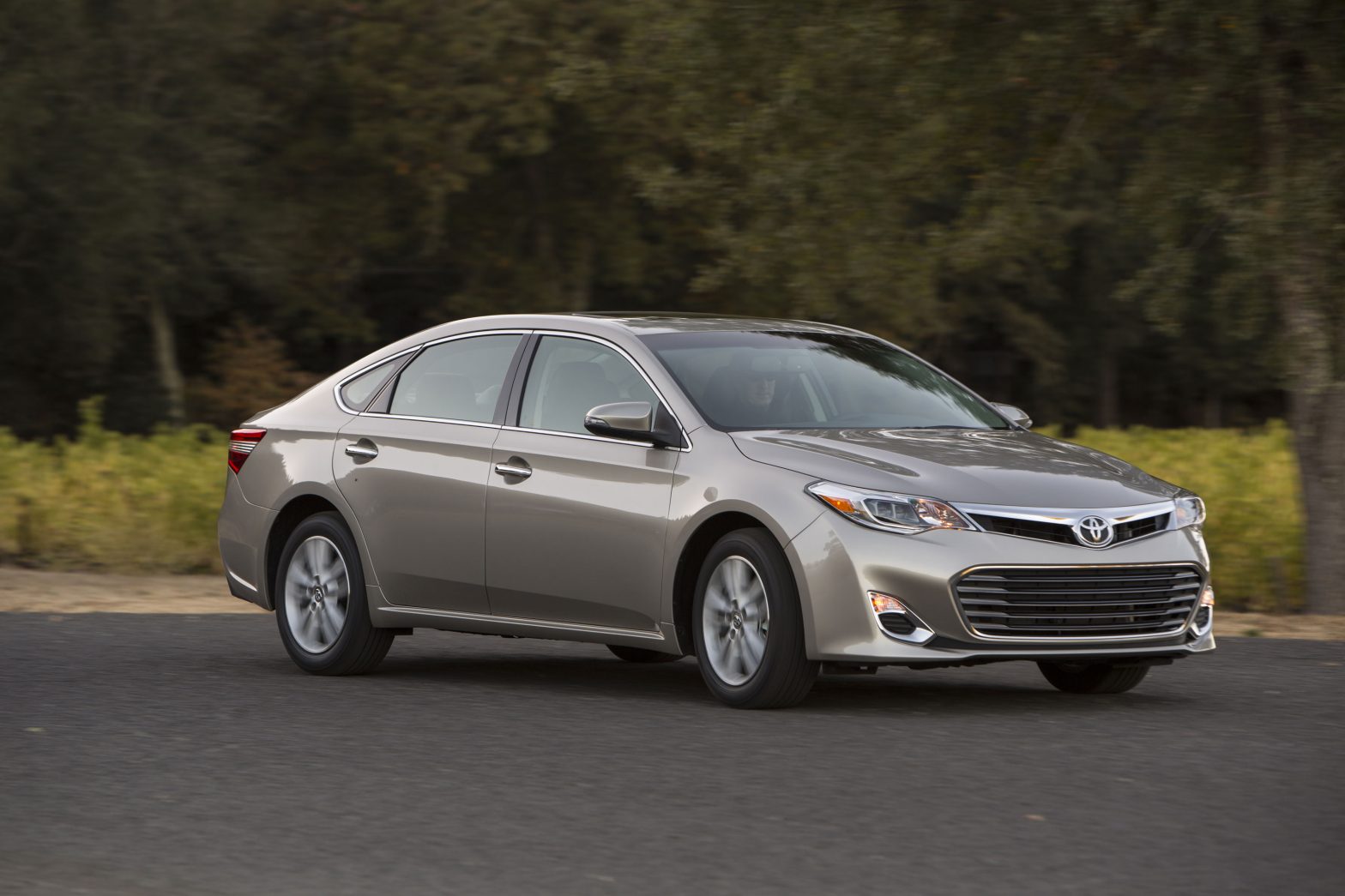 —Hell, Michigan
There are two philosophies that can seem contradictory, but Toyota, being the success that it has been for quite some time now, recognizes both as truisms and has chosen to adhere to them both. First is, “If it ain’t broke, don’t fix it.” Second is that its evolution is necessary to survival. The 2013 Avalon espouses both of these ideals, and does so in a way that works synergistically.
There are two powertrain options in the new Avalon, which is great for those buyers who have trouble choosing between all the confusing options that can overwhelm the mainstream car buyer. First is the same 3.5-liter V-6 from the old vehicle. If you’re already familiar with this engine, you know that it offers a decent balance of just-right power with respectable fuel economy. At 268 horsepower and 248 pound-feet of torque, this motor is no slouch, and can propel the Avalon to 60 miles per hour from a stop in a happy 6.7 seconds. Meanwhile it can score 21 miles per gallon in the city, and 31 mpg on the highway.
[Click here for our review of the 2012 Hyundai Azrea]
For the tech buffs and eco-friends, there’s also the hybrid option. It uses the same Hybrid Synergy Drive found in the Camry Hybrid and the Lexus ES300h. Its 2.5-liter four-cylinder engine mates to a continuously variable transmission and electric motor. The system puts down a total of 200 horsepower and 199 pound-feet of torque. This configuration offers 40 mpg in the city, and 39 on the highway.

Each version also offers separate driving modes, selectable from buttons to the rear of the gear selector on the center tunnel (it’s sort of an awkward placement, but that’s not a huge issue). The V-6 model features Normal, Sport, and Eco modes. Sport sharpens throttle response by 20 percent, and decreases the boost in the steering from the electronic power-assisted rack-and-pinion system—more on the steering feel in a bit. Eco mode decreases throttle response, and also limits the overall output of the climate control to use it more efficiently.
The Avalon Hybrid offers a fourth driving mode, EV mode, which allows it to operate under battery power without firing the engine. Not only does it save gas in low-speed driving situations, but it offers a super quiet ride. The Hybrid can operate in EV mode at up to 25 miles per hour, above which the gasoline engine steps in to offer the proper amount of power.
In both versions of the Avalon, Normal mode offers what feels like a comfortable and appropriate amount of power for most driving situations. We had no problems getting up to speed and tooling about town, or keeping up with the flow of traffic on the highway. In Normal and Eco modes, the steering feels very light, to the point of being artificial, but after a bit, we began to get used to the very low effort of the steering. It honestly didn’t put us off too much after a few miles of cruising.
Sport mode speeds things up a bit, especially in the V-6 model, which had no problem passing other drivers at higher highway speeds. It adds a bit of heft to the steering, which was definitely welcome. It still felt overboosted for those times where we decided to have a little fun and play around, but it probably won’t be a problem for most of the people looking at adding an Avalon to their stable.
We couldn’t really find anything to complain about from the handling of the Avalon. No, it’s not the most communicative conqueror of corners—particularly with such low effort to the steering—but the Avalon felt very planted in the turns, or when swapping lanes with a quick flick of the wheel. This new car features the same wheelbase as the older car (if it ain’t broke…), but has shorter overhangs, making it easy to place on the road visually.
Physically, the new Avalon has a new trick up its sleeve in its rebound springs that pull the car down opposite to the roll forces, keeping it super flat when cornering. We’d say we could notice it, but that would be misleading. The only thing we “noticed” was that we couldn’t notice much rolling motion from the chassis. That’s the point. It stays flat, so there’s very little body roll to notice. Pretty brilliant, but also a pretty humble and subtle way to make the car feel more comfortable in daily driving. We like it, even though more casual drivers will never think of it (and that’s the point).
But, if you’re buying an Avalon, the dynamic plusses will mostly be icing on the cake when you make your decision. The new Avalon will likely sell more based on its other merits.
The new Avalon has a nice style, and appeals to our emotions more than generations past. It’s a bit more aggressive and motive than before, but maintains a mature and somewhat staid persona. The front grille is larger, and definitely adds some character to the design, and catches our eye more than the previous face. The new headlights have a sleeker look to match that of the body. The LED lights in the rear not only make the car easier to see, but they give the car a more modern look. The reshaping of the car has the added bonus of making the Avalon more aerodynamic, giving it a drag coefficient of 0.28.

The interior is a very nice place to while away the hours and the miles. It feels very roomy despite the slight decrease in headroom. The cabin is open and airy, and full of pleasant, soft-touch materials. The gauges in front of the driver are large and attractive, with a helpful display in the center, which offers various modes with different basic information. The center stack is very simple and clean-looking, arranged in a way that that is easy to get used to, with a touch-capacitive interface with textured “buttons” to make it easy to use without looking. The dash is interestingly layered, giving it depth and adding a unique bit of design that is bold enough to make it memorable, but classy enough not to turn off more conservative onlookers.
The V-6-powered Avalon comes in four trim levels: XLE, XLE Premium, XLE Touring, and Limited. Thy Avalon Hybrid begins at the XLE Premium level and goes up from there. The base XLE model includes such features as leather seating, power front seats, a leather-trimmed steering wheel, wood-grain trim, Smart Key system and push-button start, dual-zone auto climate control, and 6.1-inch touchscreen display. Other available features of note are navigation and Entune system, in-car apps such as Pandora and OpenTable, rain-sensing wipers, heated front and rear seats, backup camera, interior ambient lighting, and more. The V-6 XLE starts at $30,990, with the range-topping Limited trim costing $39,650. The Hybrid XLE Premium begins at $35,555 and goes up to $41,400 for the Limited.
The back seat offers a huge amount of legroom. We would love to spend any amount of time back there, as the seats are quite comfortable, the view is decent, and with such a quiet, stable ride, we could imagine getting caught up in a book (or a nap) as we were relaxedly carried down the highway. It’s no surprise that Toyota is targeting the livery and chauffer market with a Livery Edition of the Avalon meant to replace aging fleets of Lincoln Town Cars and the like. Plus, with the enormous trunk, we’d happily hail down a new Avalon to taxi us and our luggage from the airport to our hotel.
So, while not a huge shake-up from what we’re used to (a smart move, we think), this new Avalon evolves in meaningful, practical, and moving ways in terms of image, design, and technology. Toyota’s current paradigm, if it can be surmised by what it has done with this core vehicle, has us looking forward to the next batch of vehicles coming out. Stay tuned, folks. This is worth your attention.
2013 Toyota Avalon
Engine: V-6, 3.3 liters, 24v
Output: 268 hp/240 lb-ft
Weight: 3461 lb
Fuel Economy, City/Hwy: 21/31 mpg
Base Price: $30,990
2013 Toyota Avalon Hybrid
Engine: Inline-4 with electric motor, 2.5 liters, 16v
Output: 200 hp/199 lb-ft
Weight: 3585 lb
Fuel Economy, City/Hwy: 40/39 mpg
Base Price: $35,555
Tags:
AvalonHybridLexusmainstream car buyerToyota