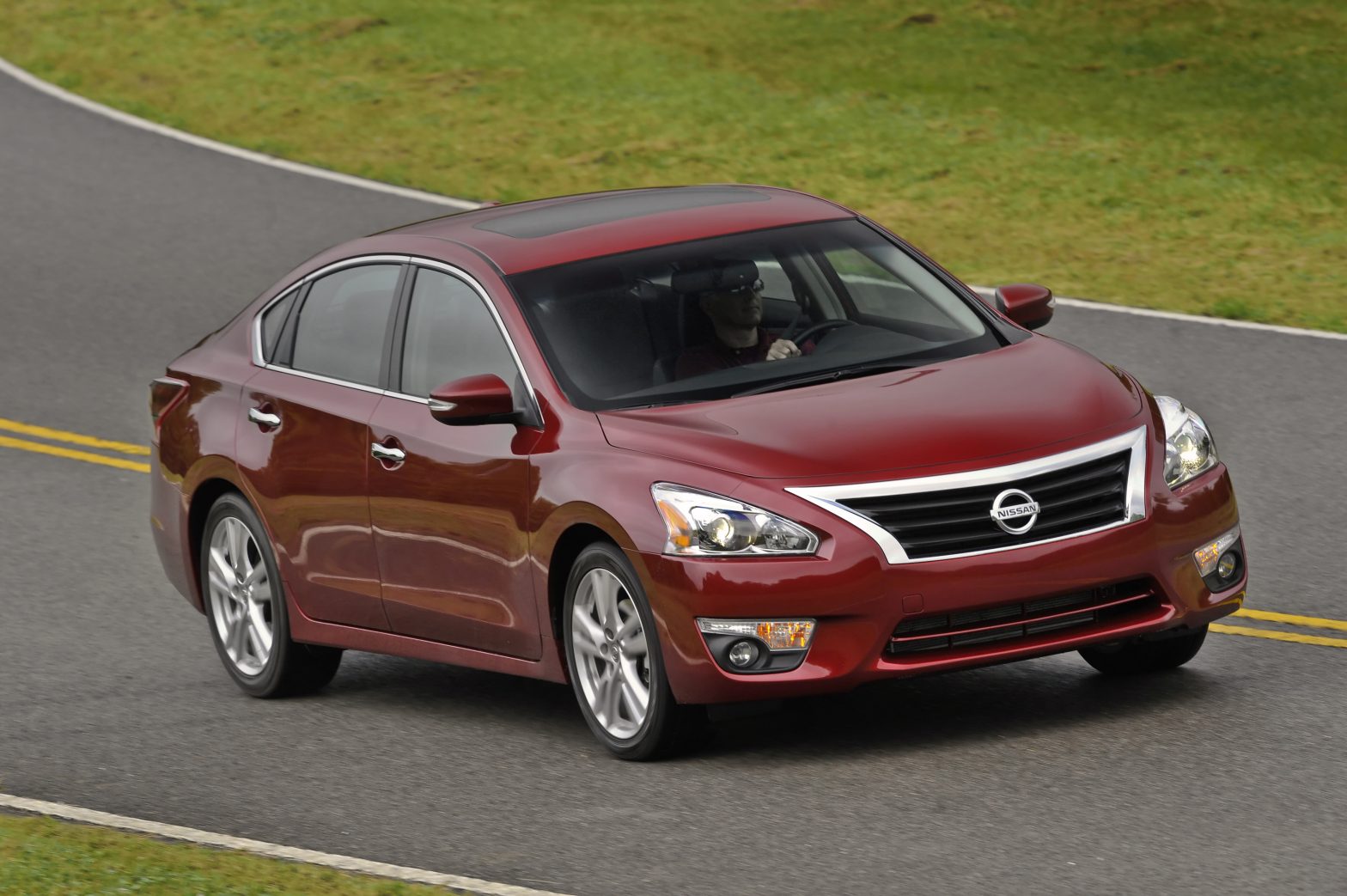 For more information about the Nissan Altima, including news, reviews, photos, and videos, please visit its master landing page.
—Nashville, Tennessee
Over the next 15 months, Nissan will be rolling out 5 all-new models. As the brand strives to take over 10 percent of the total market share in the next few years, it has got a lot riding on these new cars, which will make up the bulk of Nissan’s sales. First up is the new 2013 Altima, which we were invited to drive in Nashville, where the company’s North American headquarters are located. For us, this opportunity to drive the new sedan is like a small glimpse into the future, so we headed down to Music City to try out this automotive crystal ball.
Of course, the first thing one will notice is the Altima’s new look. It’s about an inch wider and an inch longer, with a lower roofline than before, giving it a more planted stance. The sheetmetal is much more evocative, with strong lines and creases. To us, it looks as though it has taken some cues from big brother Maxima, and it feels like the Altima has grown up a bit. We have some reservations about the use of chrome on the exterior, particularly the one line across the rear of the car, but it doesn’t project the level of gaudiness sometimes seen on its American counterparts. We’ll let prospective customers make judgments about the car’s appearance, but we think most will find this to be a nice step forward for the Altima, with a useful infusion of some personality.
The fundamentals of the car have been updated as well, particularly in the powertrain. The Altima’s 2.5-liter inline four-cylinder engine has been redesigned, and is lighter and more efficient than that of the outgoing vehicle. In driving, we were pleasantly surprised by the ample and smooth accelerative feel of the motor’s 182 horsepower and 180 pound-feet of torque (up from 175/180). Especially considering the mileage this engine metes out (27/38 miles per gallon, estimated), it seems a quite capable and good fit for the new car.
[Click here to read our review of the 2011 Nissan Murano CrossCabriolet]
This continuously variable transmission—the only offering in the Altima—is a huge improvement over the last generation, for several reasons. As Nissan points out, it helps with efficiency, and is in no small part responsible for the Altima’s expected 38-mile-per-gallon highway figure. For us, though, the improvements were most noticeable in the character of the CVT. Gone is the buzzy, droning sound of the engine working hard at high revs under acceleration. This transmission keeps the engine under control, providing calmness as you dig into the accelerator. Revs don’t reach spastic levels, and the sound from the motor is very soft, not grating or harsh. It’s a level of refinement we really appreciate, and one we hope marks the beginning of a new era for CVTs.

The sonic experience is much improved in general in this new Altima, at least in terms of comfort. No, you won’t be treated to a growling engine or tuneful exhaust, but you will be able to listen to the radio or carry on a conversation in the cabin without straining to hear. Wind noise is absent, and the tires don’t produce much background noise, either. It’s easy to tell that Nissan has put a lot of work into giving the Altima a premium-sounding interior space, and the results are impressive.
The materials, though, tell a slightly different story. General surface quality is average, but there is just too much going on. The cabin is a jumble of colors and textures. From the cloth seats to the medium-soft dash, to matte metallic-looking plastic trim, to glossy black plastic on the center stack, the design crams in too much. Rather than feeling classy and artistic, it feels thrown together and chaotic. Remove one or two of the different materials, and it would instantly seem less cluttered and more elegant.
That niggle aside, the interior is otherwise quite positive. There is a good amount of room for head and shoulders, and rear passengers will appreciate the amount of space allotted for their feet and legs. The seats are very comfortable, form-fitting, and cushy, and they distribute your weight nicely. We spent a long time behind the wheel, and never found ourselves losing feeling or circulation, or becoming particularly fatigued. Nissan would credit this to NASA research of zero-gravity posture being incorporated into the seat design. Whatever was done, it seems to have worked.
The layout of useful instruments, controls, and displays is done very well here. The big gauges in front of the driver surround a helpful color display. The infotainment system in our test vehicle was controlled by a large, easy-to-reach touchscreen on the center stack. The 7.0-inch display included in the $590 navigation system is, frankly, wonderful. It’s bright, well placed, and very convenient to use. The NissanConnect technology also includes hands-free text messaging assistance, Pandora integration, Google POI search, and send-to-car capability.
The Altima also offers some nice assistance technologies that help navigate parking lots and highways alike. The backup camera on the rear of the car not only shows what’s behind you in a very wide angle, it is also responsible for the Altima’s blind spot warning, lane departure warning, and moving object detection. Being so important for these various functions, Nissan has even built the camera to wash and dry itself when it gets wet or dirty.
There’s another bit of impressive tech that is included on the Altima. Tire pressure warning systems are an industry standard these days, but this car, as some other cars we’ve enjoyed have also done, has the ability to give pressure measurements for each individual tire. When it is time to add some air to a tire, the hazards will begin to flash as you begin to inflate. When it has reached the optimal pressure, the Altima’s horn will beep to politely let you know that you are finished inflating, and may get back to driving.
The overall ride in the Altima is smooth, but not totally isolated. For this new generation, Nissan improved body rigidity and refined the suspension. The result is compliance over the road, with information from the surface of the pavement being transmitted to the seat of the pants. We didn’t get the chance to try it on bad roads, so we’re not sure if there’s a possibility of too much interference making its way into the cabin, but from all the smoothness and polished tuning exemplified elsewhere in the ride, we’d guess that it would be difficult to make this Altima feel uncomfortable.

On our test drive, which consisted of a lot of long, sweeping curves, the turning behavior was well composed. It had this wonderful habit of planting itself nicely over its suspension and arcing through the turn, feeling locked down and planted, without rolling to the side much at all. Even in the tighter stuff, the Nissan felt completely under our control. Understeer is not a problem, and the Altima traces your intended line with ease. This is partially thanks to the car’s Active Understeer Control, which gently brakes the inside front wheel to help the vehicle rotate—all done with exceptional smoothness.
It helps, too, that the steering wheel feels really good in hand. It offers a small amount of vibration corresponding to the road surface, and offering just a smidge of communication. It’s not too talkative, though, as that would undermine the detached ease with which one can drive the Altima.
As we navigated the hilly roads between Nashville and Lynchburg (home of the Jack Daniel’s distillery, where we stopped for lunch and iced tea), we got the chance to play with the CVT some more. Below the D on the gear selector is a Ds mode. In this setting, the CVT slightly mimics a traditional automatic transmission by climbing through the revs and “shifting” near the 6200-rpm redline. It didn’t seem to affect acceleration or involvement much at all, especially lacking the paddle shifters available in the V-6 Altima.
The CVT did seem quite intelligent, though. On downhill grades, we noticed the transmission automatically adjusting the revs to keep the car from gathering too much speed without throttle input. It was as though the Altima knew when we would have downshifted, and took care of it for us. Clever, we think.
The new Altima is clearly not an involving sports car made for enthusiasts. A smart, efficient, roomy, and very comfortable sedan is what it is. It’s also a marked improvement over the last generation, and is poised to gain further popularity among the car-buying public, who will likely see it as a great value for their hard-earned dollars.
VS: Hyundai Sonata
The Sonata offers some stiff competition to the new Altima. It has really nice design work, and looks and feels nicely premium for the price. The Hyundai’s interior is more attractive, but the Altima feels more roomy and comfortable. Drivers looking for a more engaging drive will find it with the Sonata, mostly because of the engine/transmission combination, and the fact that it can be had with a manual transmission. For more convenience, greater efficiency, and more quiet and comfort, the Altima’s your practical choice.
VS: Toyota Camry
These are close competitors. Both offer a nice ride and refinement, but neither have much in the way of thrilling behavior. Looks are subjective, but the Nissan’s exterior offers a bit more flair and presence on the road. The Camry’s interior is cleaner and more minimalist, but the Nissan offers some great, inexpensive technology. The Camry is down slightly on power and on gas mileage compared to the Altima, which may just be the deciding factor for a lot of people.
2013 Nissan Altima 2.5
Engine: Inline-4, 2.5-liters, 16v
Output: 182 hp/180 lb-ft
0-60 MPH: 7.14 sec
Weight: 3108 lb
Fuel Economy, City/Hwy: 27/38 mpg (est)
Base Price: $21,500
Price As Tested: $27,490
On Sale: July 2012
Tags:
AltimaHyundai SonataMaximaNashvilleNissanNorth American headquartersspastic levels