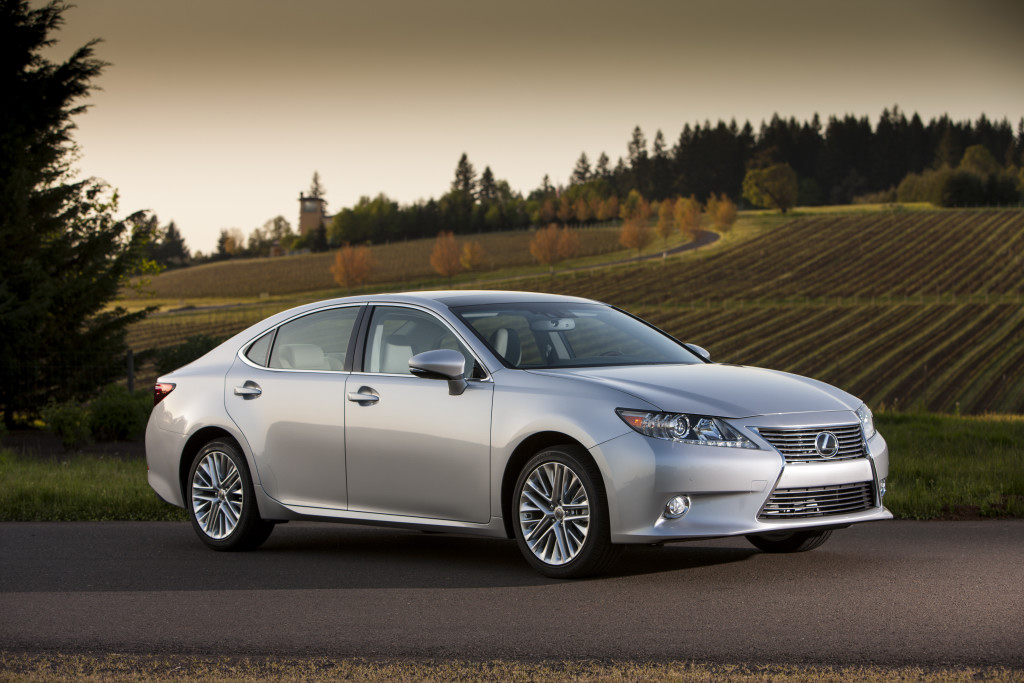 —Dearborn, Michigan
There’s an old saying: “There are cars that you drive, and cars that you are driven in.” The 2013 Lexus ES is for the sort of folks who prescribe to the latter philosophy, but haven’t quite achieved full-on limo-passenger status yet.
Put another way, ES buyers would probably be more inclined to spend big money on the grandfatherly Lexus LS than the tire-smoking IS-F. This is merely conjecture on our part, but based on our driving experiences with the new ES, we feel rather confident in our assumption.
It starts with the looks. Lexus’s PR crew threw around words like bold, assertive, and aggressive, but we aren’t certain that they were looking at the same vehicle we were. Yes, the new ES has gotten the “spindle grille” that was so well executed on the 2013 Lexus GS range, but it somehow looks more reserved on the sixth-gen car.
This is partly down to the revised front bumper and fenders. While the GS’s front end looks like it’s seen more steroids than a party thrown by Jose Conseco and Roger Clemens, the ES looks like it’s been botoxed. It’s smooth and rounded, rather than angular and sharp.

The interior makes the same quantum leap we saw with the new GS. A leather-trimmed dash, along with a classy strip of real wood (Birdseye Maple on all but the very base ES350, and bamboo on the ES300h), means everything in the passenger’s immediate line of sight looks and feels great. The center stack is mostly soft-touch plastic but the other important bits (the control mouse, center cubby) are finished in leather. The ES is also getting the same thick-rimmed, three-spoke steering wheel that debuted in the CT200h and is now offered in the GS.
The ES comes to market with two engine options. The ES350 is powered by a 3.5-liter V-6 that powers the 2012 Toyota Camry. That means 268 horsepower and 248 pound-feet of torque are routed to the front wheels. In the gas model, a six-speed automatic (with manual mode) is standard. The V-6 ES will net 21 miles per gallon in the city and 31 on the highway (24 combined mpg). There will also be a ES300h, which uses a 2.5-liter four-cylinder as part of a hybrid drivetrain. We’ll be testing that one at a later date.
For 2013, the ES also gets a Drive Mode Selector. Like in the GS, there’s Eco, Normal, and Sport modes that alter the transmission’s shift points, throttle response, and steering weight.
We’ve become rather familiar with Lexus/Toyota’s 3.5-liter V-6 over the years, so we weren’t overly surprised by the smooth, linear way it delivered its power in the ES350. Punching the throttle from a standstill, we saw the tach needle climb silkily through the rev range as engine speed built.
Throttle response was largely dependent on what mode we happened to be in. In Normal, it felt just right, with appropriate reactions to pedal inputs. Sport picked things up slightly, although the throttle response wasn’t quite as sharp as we’d hoped it would be. When we stepped on the pedal in Eco mode, it was akin to stepping on a bag of sand. It felt artificial and overdone. Still, we suspect (and we’ll need a longer test to confirm this) that this retardation of the throttle response would result in a reasonable bump in fuel economy.
Acoustically, this engine is a bit of a bore. It sounds like a pretty average V-6, lacking any real sense of passion or drama as we ran it through the rev range. It began to sound harsh near redline, with a strained note that didn’t fit the car’s luxury profile.
The ES350’s six-speed automatic delivered the kind of unobtrusive, transparent shifts that we expected of this sort of vehicle. Left alone, upshifts and downshifts happened quickly and at the appropriate times. We opted to try out the manual mode, but quickly regretted our decision. The trans reacted somewhat quickly to downshifts, but seemed absolutely dead-set against upshifting when we wanted. When we pressed towards the plus sign on the shifter, we were faced with at least a one-second delay before anything happened. Although we weren’t bouncing off the rev limiter (the computer was quick to prevent that from happening), it seemed our input about upshifts was secondary to the computer’s programming.
We had hoped that when our PR friends mentioned the electronic power-assisted steering on the ES, they were referring to the same awesome rack on the GS. They weren’t. This setup was numb and lacked weight across all three Drive Mode settings. The effort felt universal across the tiller’s range, with no real sense of weight build-up.
The ride in this car was really great. Often when we go on press launches, we’re stuck on roads that are smoother than a Teflon-covered supermodel. Not this time. For this launch, we were in Ford’s backyard, in Dearborn, Michigan. It felt like the last time these roads were repaved was during the Nixon administration, and the guys that did it did a crappy job. This is a prime area for testing the ride of a luxury car, and the ES350 did not disappoint.
We really can’t overstate how well Lexus did tuning this suspension. While we could feel, and to a lesser extent hear, the impacts, potholes, and imperfections, only the largest ones made it through to the cabin. We weren’t jostled or tossed about, though. Vertical motion was well controlled, with the ES feeling planted and controllable over the rough sections of tarmac. We suspect part of this had to do with the seventeen-inch wheels of our tester, while the rest was down to the revised suspension Lexus fitted to the new ES.

According to the Lexus folks, the front suspension uses opposite-wound coil springs. This setup improves straight-line stability by better absorbing the energy transmitted through the suspension. Revised damping also plays a large role in the smooth ride.
As good as the ride was, there’s more to a comfortable vehicle. This was a very quiet cabin. Wind noise was well controlled, and although we registered more than a few of the impacts on the roughest sections of our drive route, there was very little road noise on the more civilized sections of asphalt. The ES’s low-rolling-resistance tires didn’t exhibit much in the way of tire roar either. The level of engine noise is appropriate, so long as you are willing to keep the revs below 5000 rpm. The base audio is just fine, but true audiophiles will want to opt for the 15-speaker Mark Levinson unit.
Backseat space is really excellent. We set the driver’s seat for our six-foot, one-inch frame and had more than enough legroom in back. Headroom is quite good too. The rear seats are rather deep and supportive which helps ward off fatigue when on a road trip. It’s certainly not tough to get comfortable if someone else is doing the driving.
The actual driving environment was well suited for the long haul. Lexus lowered the angle of the steering rack by two degrees, which, along with the tilt-telescopic wheel, should really allow the majority of drivers to find a comfortable position at which to hold the wheel. The driver’s seat features a greater range of adjustability on the 2013 ES as well, with an extra inch of downward travel. While it might not be hugely engaging, we’d have no qualms taking the ES350 on an extended road trip.
So no, the 2013 Lexus ES350 is not a dynamic car by any stretch. What it is, is 80 percent of the flagship LS’s comfort for 50 percent of the price. It’s a long-distance cruiser, designed to transport four adults without fatiguing them along the way. Its glass-smooth ride, reasonably potent engine, and comfortable interior make a fine choice if you are in the market for a biggish luxury sedan.
2013 Lexus ES350
Engine: V-6, 3.5 liters, 24v
Output: 268 hp/248 lb-ft
Weight: 3549 lb
0-60 MPH: 7.1 sec
Fuel Economy, City/Hwy: 21/31 mpg
Base Price: $37,000 (est)
On Sale: September 2012
Tags:
DEARBORNESGSISLexus