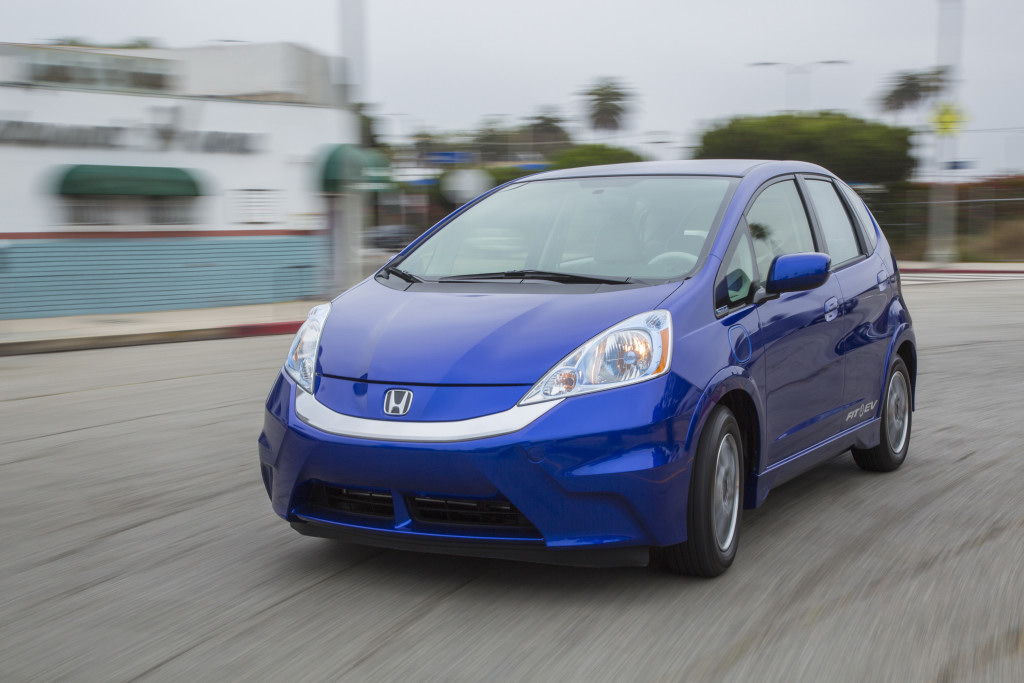 At first glance, the Honda Fit might seem like an unlikely candidate for an electric heart. In standard guise, it achieves a respectable 35 miles per gallon in combined driving and starts at only a shade over $15,000. Is it necessary to take an already economical small car and create an entirely new vehicle out of it? A significantly more expensive one at that?
Right off the bat it needs to be said that it’s tough to compare electric vehicles to gasoline-powered ones. A major sticking point of EVs that typically prevents people from buying them has always been price, and not talking about the subject of price when doing a comparison is like trying to ignore the pink elephant in the room. As manufacturers continue to improve technology and bring costs down to a more manageable level, the popularity and acceptance of electric vehicles is likely to grow, but their financial viability is currently still a bit of a stretch.
[Click here to read our review of the 2012 BMW ActiveE Electric Vehicle]
For a moment, lets imagine that electric vehicles only had to compete with each other, and gasoline-powered cars weren’t part of the purchasing equation. Running with this fictional scenario and comparing apples (the Fit EV) only to apples (other EVs), let’s see if Honda’s newest electrified vehicle makes sense in the broader market.

The Fit EV retains many of the gasoline-powered Fit’s redeeming qualities, while creating a niche and a personality all its own. Driven by a 92-kilowatt AC electric motor and supported by a 20-kWh lithium-ion battery, the EV has an EPA-certified unadjusted range of 132 miles in the city, and an adjusted range—adjusted to better reflect real world driving—of 82 miles of combined city and highway driving. That figure gives the Fit EV the edge versus its competitors: the Nissan Leaf (73 miles), Ford Focus EV (76 miles), and Mitsubishi i-MiEV (62 miles).
Charging the batteries in the Fit EV from nearly empty to full on a normal 120-volt outlet takes around 15 hours. Using a special Level 2 AC 240-volt connection, charging time is under three hours—which bests the EV’s competition. Honda recognizes a company called Leviton as its preferred Electric Vehicle Supply Equipment (EVSE) supplier so owners can adapt their homes’ power supply to allow for the increased voltage.
As is the norm, the Honda Fit EV allows for power delivery in three flavors—Normal, Econ, and Sport. Switching between the modes produces a significant and noticeable difference in the way the Fit EV behaves. In Econ mode, the car utilizes its regenerative braking feature noticeably more, and restricts power output to 47kW. The throttle is distinctly muted in this mode and the regen braking puts more drag on the car as it recharges the battery. Moving the shifter into a special “B” mode takes further advantage of regenerative braking—there is enough drag going down a hill in this mode that the EV will nearly stop itself.
Select Normal, and the Fit EV feels less restricted, the regenerative systems less intrusive, and power is opened up to 75kW. There is a noticeable change from Econ to Normal mode, but there is a substantive difference noticeable when the Sport button is selected. Here, one can access all 92kW and can fully experience the EV’s genuine fun-loving nature.
That joyful nature is realized soon after planting your right foot. The thrust from the electric motor is immediate and strong. Floor the throttle from a standstill, and the EV’s 189 pound-feet of torque easily overpowers its skinny tires. This makes for hugely entertaining wheel spin before the traction control system cuts in.
Once the tires find their footing, power delivery is smooth and linear—the throttle is easy to modulate and there’s no jerkiness at takeoff or under partial throttle. On the highway, there was ample power on tap when we needed to squirt around someone in the slow lane or merge into traffic. The ease with which the Honda Fit EV drove continued at highway speeds—cruising at 75 miles per hour never felt strained or stressed.
Power is where we noticed the biggest difference between the gasoline-powered Fit and the Fit EV. Where the standard Fit needs to be prodded to make things interesting—it only makes 106 pound-feet of torque­—the Fit EV has ample grunt for nearly every situation. This smooth, accessible torque delivery makes the car a breeze to pilot around town.
On the road, the EV had a comfortable ride thanks in part to independent multi-link rear suspension. On the “sport driving” course Honda had prepared, the Fit EV was reasonably nimble, though the harder it was pushed the more the suspension was overpowered by the extra 893 pounds the EV carries over the standard Fit. The EV’s suspension felt softer and more prone to understeer than the setup in the standard Fit. Moderate body roll was especially noticeable on the course’s high speed right-lefts, likely caused by all that extra poundage from the car’s battery pack.

Turn in was quick and eager, but a lack of steering feedback hampered aggressive driving. This is where we again noticed a difference between the standard Fit and the EV. The EV’s steering was decently weighted, but it felt numb and artificial where as the normal Fit feels more connected to the road.
Braking in the Fit EV is handled by both friction braking as well as a regenerative braking system. When you step on the brake pedal, you’re greeted with solid feedback and linear feel, which translated into surprisingly deep braking on the sport course and nicely complimented the EV’s buoyant and willing acceleration. Interestingly, what you feel when you hit the brakes isn’t coming from a hydraulic system—a dedicated braking simulator provides the pedal feedback, while a new electric servo brake system does the actual work.
The Honda Fit EV sports 11.1-inch ventilated disc brakes up front and 8.7-inch drums at the rear, which haul the car’s 3252 pounds down with authority from speed. Out on the street, the brakes were easy to modulate and, because there was so little pressure needed to engage them, quick stops in snarled traffic are easy to come by. The brakes did feel slightly grabby when traffic became stop and go.
Sliding in behind the wheel of the EV was like getting behind the controls of the normal Fit—with the exception of specific gauges and buttons and a new color scheme, it’s the same car. We recognized the same deep dashboard and A-pillars that meet the hood far in front of you, the same surprisingly large passenger compartment, and the ease of use that has always made the Fit a useful small car.
The rear seats have been moved back by just over three inches to make room for the battery pack, which resides in the floor. The backseats retain their 60/40 split feature, but the ability to raise the rear seat cushions up is gone, and cargo room is down slightly from 57.3 cubic feet in the standard Fit, to 49.4 in the EV.
One small criticism we had of the Fit EV’s interior was that some of the readouts were small and difficult to read. Toggling through the vehicle information options via the steering wheel mounted controls is easy, but deciphering what you were looking at—for example, the icons for the ECO scoring system that tells you how efficiently you are driving—is a little awkward to read while on the move.
Honda also offers the Fit EV with a slick and easy to use smartphone app. With it, you can preset when the car will begin charging to take advantage of off peak energy rates, see the status of the battery charge, and adjust the climate control inside the car. A remote control offers drivers the same functionality as the app and can be used up to 100 feet away.

When it arrives in Oregon and California later this month, and then in Boston, New York, Baltimore, Hartford, and Washington DC in early 2013, the Fit EV will only be available to be leased and will arrive in one trim level, though that trim level is dressed to the nines—navigation, Bluetooth connectivity, MP3 and USB compatibility to name a few. Honda is projecting it will lease 1100 Fit EVs.
After spending time in the Fit EV, we were impressed with how normal the car felt. Besides the lack of engine noise and stops for gas, it was like driving any other car. That brings us neatly back to the question of whether this car makes sense versus its competitors, and against the already economical gasoline-powered Fit.
Using the fictional scenario of comparing the Fit EV against only other electric vehicles, we found that the car does make sense—it offers superior range and charging time, it’s fun to drive, is based on an already successful and driver-friendly platform, and is priced competitively to other cars in its class.
When the inevitable comparison is made to the regular Fit, however, that’s where the answer becomes less clear, and where the question of price once again raises its head. The three-year lease for the Fit EV will run $389 per month, or an MSRP of $36,625. While that figure is less than the top-spec Leaf at $37,250 and the starting price of $39,200 for the Ford Focus EV, the gap between it and the normal Fit is undeniable.
Is it worth it to shell out nearly $400 per month, when you can pick up a fully equipped Fit Sport with Navigation for almost half the price? And be able to keep it longer than three years? From a pure numbers perspective, no. However, for those looking to join the EV movement, or those looking for a fun to drive, emissions free urban runabout without too much concern for price, the Fit EV definitely makes for a compelling option.
2013 Honda Fit EV
Engine: Electric motor, lithium-ion battery
Output: 123 hp/189 lb-ft
Weight: 3252 lb
Fuel Economy: 118 MPGe
Base Price: $36,625
On Sale: July 2012 (limited availability)
Tags:
2013 nissanelectric vehiclesFitFordHonda