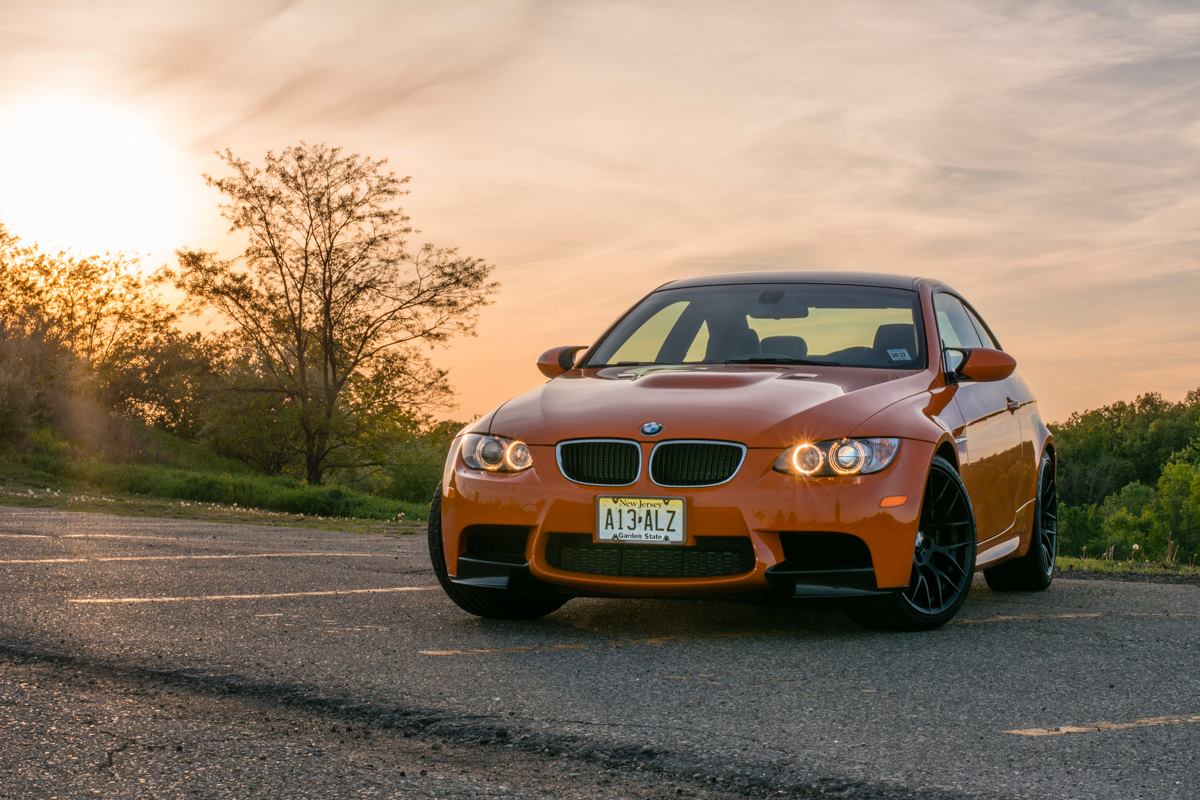 —Lake Orion, Michigan
Ignore it all. Ignore the styling. Ignore the dated trim. Ignore the HVAC. Ignore the iDrive system. Ignore everything about the 2013 BMW M3 except for the way it drives and you’ll find a vehicle that is still a competitive and lust-worthy driving instrument six years after it went on sale.
As the current M3 approaches the end of its life, we thought it apt to do one final review of a Winding Road favorite, and boy, did BMW hook us up with this one.
What you’re looking at is one of just 200 M3 Lime Rock Park Editions. Adding the limited edition trim adds $10,000 to the M3’s $60,000 price tag, which nets a few exclusivities not available to the general riff-raff.
[Click here to read our review of the BMW 335is Coupe]
The Flame Orange paint is the same shade used on the Europe-only M3 GTS. It’s a deep, glossy color that wouldn’t look out of place on a racecar. The other LRP exclusive is the seating—they’re the same chairs you get in a standard M3, but they’ve been wrapped in black Nappa leather.
That $10,000 doesn’t just add some funky paint and black leather. For the LRP M3, BMW raided its M Performance accessories catalog, plucking some of the best items out. This is great news, because if you missed out on one of the 200 Lime Rock Park Edition M3s or you just aren’t crazy about that orange paint, you can essentially build your own version with the accessories listed below.

The cabin is adorned with the best steering wheel in the BMW range, an Alcantara-wrapped, flat-bottom number that wouldn’t look out of place on an M3 GT2 racer. If there’s one item we’d suggest everyone add to their own M3, it’s this beauty.
The rest of the bits from the accessory catalog can be found on the outside of the car. The front fascia sports a pair of carbon-fiber aero pieces, while a meaty, CF spoiler sits out back. The sole performance mod is the lightweight, iconel-titanium exhaust.
Finally, the Lime Rock Park’s price includes the $2500 Competition Package, which if you’re buying an M3, this is an option you should already want. The Competition Pack adds BMW’s Dynamic Damper Control, a system that uses magnetorhelogical dampers and allows drivers to set the suspension firmness in one of three settings (Sport, Normal, Comfort).
The Competition Pack also lowers the M3’s suspension about half an inch. A set of 19-inch, Y-spoke wheels, wrapped in sticky Pirelli tires is the final piece of kit.
The rest of the M3 formula is largely unchanged. A fantastic 4.0-liter V-8 sits in front of the driver, turning out 414 horsepower and 295 pound-feet of torque. Both of those are low numbers in today’s world, but when paired with an 8400-rpm redline, the M3 feels far more eager to go than its competition.
What we’ve always respected is the way the V-8 M3 makes its driver work. The 3900-rpm torque peak is accessible enough, thanks to the way the S65 V-8 revs, and the torque curve is as level as a billiards table, but 295 pound-feet is just not a lot of shove.
This is an easy car to get caught out in. Bleed too much speed through a bend or exit a corner in the wrong gear, and those 295 pound-feet just aren’t enough to rescue you. The M3 demands your attention if you want to go quick.

Get it right, and this engine will sing and dance like few others on sale today. The 8400-rpm redline is so addicting it should be a controlled substance. From 5000 rpm and up, the power of the V-8 seems endless, with the accompanying redline gear change putting you right back on the boil.
If the M3’s engine is its beating heart, the bones are its excellent aluminum suspension. As we mentioned, our tester was outfitted with the Competition Pack as part of the Lime Rock Park trim, which means the standard suspension is complemented by a set of electronic dampers. Don’t let the three settings of the DDC system fool you—the M3’s ride is firm no matter what. This is a sporty car, and it’s not inclined to let its driver forget that fact.
You feel everything. Bumps, divots, potholes, expansion joints, ants, pebbles, bird poop, the lines on the road—if the M3’s tires go over it, you’re going to know. It’s not uncomfortable, though. There’s not an overabundance of vertical motion, and while impacts are clearly transmitted to the cabin, they’re not disruptive to the driving experience.
The balance between comfy and sporty is just fine for around-town driving. If you want the M3’s full potential, though, you need to select Sport. With the dampers set to their firmest setting, this still isn’t a car that will batter its driver. The ride is planted and hunkered down. Throw the car into a hard corner and it just bites down, grips, and goes. There’s not a lot of body roll to get in the way of the fun. Overall, it’s just a very level, confidence-inspiring driving experience.
Some enthusiasts take pleasure in criticizing BMW for fitting electronics and aids to its M cars that will improve lap times at the expense of the driving experience. Those enthusiasts have probably never driven an E92 M3.
The vibrations coming off this awesome steering wheel are ever present. Whether driving an arrow-straight road at a reasonable speed or blasting down your favorite stretch of twisties, the steering is constantly communicating with its driver about road conditions through subtle quivering and pulsation.
Diving into the brake pedal is like sticking a fork in an electrical outlet. Feedback just floods in about how much grip the front tires have, and just how much more stopping power you can afford to feed in before the ABS activates. Meanwhile, working the gas pedal hard tunes you into the ongoing debate between the road and the rear tires, regarding who’ll be giving it up to whom.

As talkative as the steering and pedals are, the vast majority of the feedback comes from the M3’s sculpted leather seats. Sports seats like these are designed to make as much surface contact with the driver as possible, therefore allowing more feedback to be delivered.
With the M3, this level of chatter cues the driver in to everything from lateral grip levels when turning, to the sensations listed above.
The E92 M3 has a weight distribution of 51/49, making it almost perfectly balanced. That’s just a number, though. The seats are the real informer of balance, constantly letting the driver know when accelerating, braking, or turning just where the M3’s 3700 pounds is being shifted.
The steering, pedals, and most importantly, the seats are what make the M3 such a pleasurable driver’s car. You know what’s going on with the vehicle because you feel it on a deep level.
At the beginning of this piece, we implored you to ignore the M3’s age-related issues, but there’s one particular item we didn’t mention. Our tester’s seven-speed, M dual-clutch transmission was a bit of a double-edged sword.
Drive this cars as hard as you can with the seven-speed in manual and on its fiercest setting, and the gearbox is very good to use, with wide-open throttle, redline upshifts eliciting a racecar-like bark from the rear pipes. Pull the left paddle a couple times, and the transmission will happily drop multiple cogs, serving up just the right gear and engine speed for its driver to exploit. It’s fun.
In every other way, the DCT is a product of the times it was developed in. It debuted in the infancy of dual-clutch transmissions, and that shows through if you try to drive the M3 civilly. You need to dig a bit farther into the throttle than is comfortable to get moving, with the DCT almost impersonating a manual in the way it feeds power in. If you don’t give it enough gas, it simply won’t move at all.
Parking the M3 requires the driver to put the DCT in Neutral, pull the handbrake, and turn the car off. Then and only then, will you see a little “P” displayed in the instrument cluster.
It’s not exactly fair to criticize the M3 in this respect. DCTs have improved by leaps and bounds since 2007, with the M cars featuring some of the finest twin-clutch setups on the market.
It’s a testament to what BMW did with this fourth-generation M3 that it’s still competitive against genuinely excellent entries like the Audi RS5 and Mercedes-Benz C63 AMG, years after it debuted. The Audi and Mercedes are fast, technologically impressive powerhouses. Both are cars that anyone on the Winding Road staff would be happy to take. But if you ask the members of our team which vehicle they’d want to shell out their own money for, you’d be hard pressed to find someone that didn’t answer, “The M3.”
2013 BMW M3 Lime Rock Park Edition 7AT
Engine: V-8, 4.0 liters, 32v
Output: 414 hp/295 lb-ft
0-60 MPH: 4.5 sec
Top Speed: 155 mph*
Weight: 3704 lb
Fuel Economy, City/Hwy: 14/20 mpg
Base Price: $70,995
As Tested: $80,295
*electronically limited
Tags:
BMWSGD