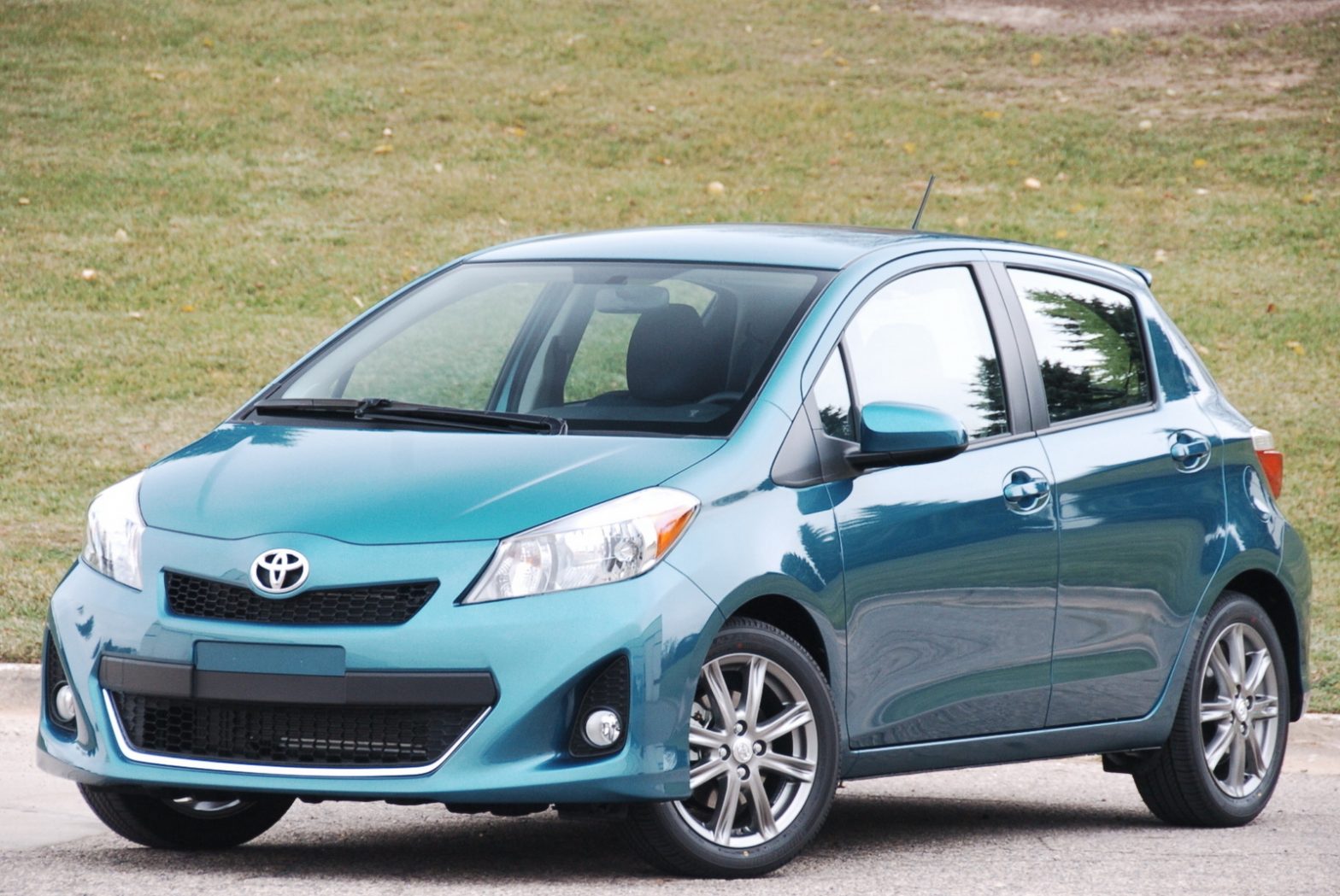 The first-generation Toyota Yaris wasn’t known for being involving or fast. It holds a rating of 61 on our Involvement Index. It was, however, a car that possessed a very small footprint. It had a wheelbase shorter than a Mini Cooper and was lighter, too. Those qualities instilled a chuckability and fun-to-drive nature in the Yaris that made it a seriously cheap, mild thrill. Now the second-generation Yaris is here, and it’s larger and more refined. Thankfully, it still has the tossable nature that made the old car so much fun.
Throw it into a bend, and it just seems to go. It’s not the most graceful cornering experience you’ll ever have, tending to roll a bit too much, but this thing’s ability to carry speed around corners will put at least a small smile on your face. Where it’s different from the previous model is that it actually is tolerable to ride in when you aren’t going around turns. The suspension does a good job of soaking up road imperfections, although it’s hardly Ford Fiesta-like in its execution. There’s still too much vertical motion over the real rough patches.
Besides the more comfortable ride, the Yaris is more livable thanks to it’s new interior. Toyota has finally moved the gauge cluster back to where it belongs, ditching the silly center-mounted setup of the old car for a more conventional layout. The dash plastics Toyota used on this new Yaris were a cut above the old car, and actually didn’t look or feel too bad. Where we were really impressed was with the seats and the steering wheel.
Our tester featured a thick, leather-wrapped, small-diameter steering wheel that felt good in the hand and had just the right dimensions to encourage some driving shenanigans. Despite the nice wheel, the steering is classic Toyota, in that it lacks weight and doesn’t deliver enough feedback. That being said, this rack does feel more talkative than the last Yaris we drove. It’s also a fairly fast steering rack, making the Yaris feel more agile than its predecessor.
The seats, ignoring the lurid light blue inserts found in our tester, were more supportive than we had expected. Side bolstering was quite good, keeping us in place during hard cornering. We would have liked a center armrest though, as we were never quite comfortable behind the wheel.
That brings up a larger point that we have with the Yaris. We understand this is an economy car, but there really needs to be a larger range of adjustment in all the driver interfaces. The steering didn’t tilt very much, didn’t telescope at all, and the otherwise comfortable seats were hindered by a lack of height adjustment. Regardless of how much we fiddled, finding a comfortable seating position for our six-foot-one-inch frame was nearly impossible.
The Yaris’ improvements unfortunately don’t extend to the powertrain, which consists of the same tired 1.5-liter four-pot/four-speed automatic combination that was on the last-gen car. By the numbers, this engine isn’t too bad. It nets 35 miles per gallon on the freeway, produces 106 horsepower, and 103 pound-feet of torque. Those numbers never really translate to the road though. This is a car that you need to rev the hell out of to get anywhere. That normally wouldn’t be a particularly bad thing if the engine sounded more refined. Instead, this four-pot produces a dull drone that interrupts the whole driving experience.
Leaving shifting duties to the four-speed auto doesn’t help things, as the transmission spends too long searching for gears, and not enough time actually putting power to the pavement. What’s more frustrating is that, on our top-trim five-door SE, the four-speed auto is the only gearbox you can get. There’s a five-speed manual, but you’ll have to opt for the most basic Yaris to get it.
Toyota has succeeded in making the Yaris a better driver’s car, but the process of improving the ride and the interior has just served to highlight the pieces that aren’t up to par, namely the engine and transmission. When the Yaris first came to market, cars like the Mazda2, Ford Fiesta, and Fiat 500 didn’t exist for American buyers. Today’s small car universe is vastly more competitive, and thusly more difficult for this, admittedly improved Yaris to play in.
VS: Mazda2
Dynamically, the Toyota lacks the Mazda’s character and visceral driving experience. It balances that out with slightly better fuel economy and a tiny bit more power. One could also make the argument that the Mazda’s sporty ride is a detriment, in which case we’d direct them right to the more softly sprung Yaris.
VS: Hyundai Accent
As good as the new Accent is, it lacks the fun-to-drive character of a small car like the Yaris. This new model is bigger and more powerful, but also less agile than the Accent of old. Off the line, we’d put our money on the Hyundai and its 138-horsepower four-pot, but in the bends, the Yaris feels far more capable, delivering sharper handling and better suspension feedback.
VS: Ford Fiesta
If you want the pinnacle of small car, than the Ford Fiesta is it. That isn’t meant as a knock against the Yaris though. In some respects, Toyota’s small car actually outdoes Fords. The Yaris feels more tossable than the heavier Fiesta, and it’s on par in terms of acceleration, thanks to the Fiesta’s conservative gearing and weight disadvantage (although we wish it had the Ford’s beefy exhaust note). Steering feedback on both cars isn’t great, but we’re partial to the faster steering rack in the Toyota.
2012 Toyota Yaris Five-Door
Engine: Inline-4, 1.5 liters, 16v
Output: 106 hp/103 lb-ft
Weight: 2315 lb
Fuel Economy, City/Hwy: 30/35 mpg
Base Price: $17,200
On Sale: Now
Tags:
dash plasticsFordFord FiestaMini CooperToyotaYaris