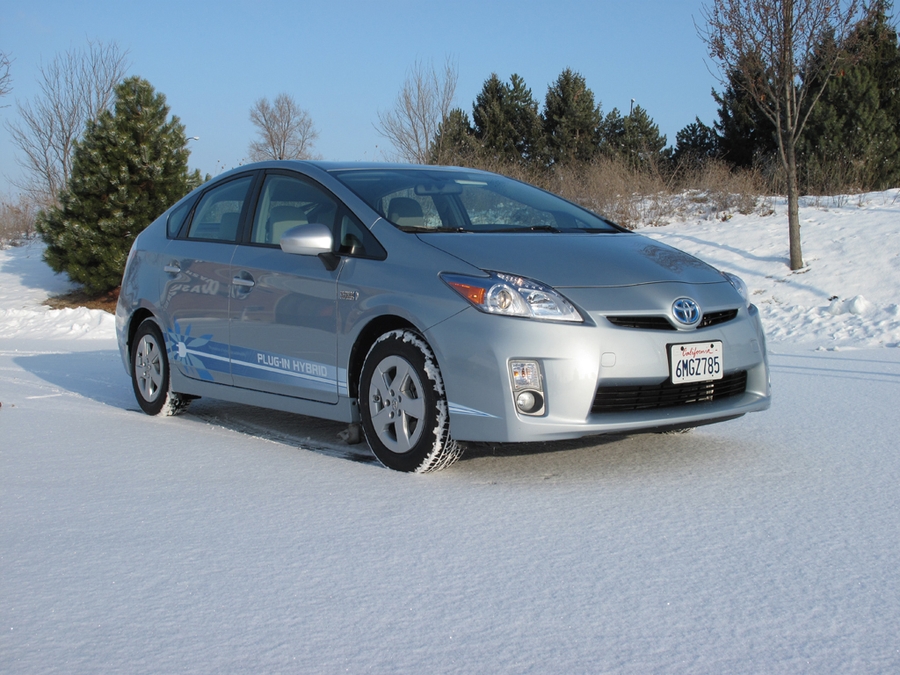 If there has been one trend that has heavily influenced the automotive industry, it has been the march towards increased environmental responsibility, and consequently increased fuel economy. This effect was especially noticeable at this year’s North American International Auto Show, where both Porsche and Mercedes-Benz displayed hybrid-electric supercars (Porsche 918 RSR, Mercedes-Benz SLS AMG E-Cell).

While it certainly isn’t as sexy as an SLS, Toyota’s Prius PHV, which was on hand in Detroit, is arguably more important. Not only is it Toyota’s first plug-in hybrid, it is a representation of a hybrid class that should grow considerably in the next few years. And, Toyota isn’t the only manufacturer with a plug-in on the way; Ford has already announced a PHV version of its C-Max people mover.

Our PHV was part of a fleet of 150 cars in the United States (and another 350 worldwide) that Toyota has been loaning to members of the media as well as government agencies and utility companies for testing. The data that is being collected from these cars will be used to perfect the production models when they arrive sometime in 2012.

In reality, the Prius PHV differs mechanically and dynamically only slightly from the third-generation car that it’s based on. The biggest mechanical change centers around the battery pack, with the single nickel metal hydride battery being replaced by an advanced lithium-ion batteries.

Lithium-ion batteries have a considerably higher energy density than traditional NiMH batteries, which makes them a better option for the high demands of the electric drivetrains in plug-ins and EVs. The Prius PHV uses three batteries, two of which are dedicated to the EV mode, while the last pack functions as a normal part of the hybrid system.

The standard Prius allows drivers to press a button for EV mode, and drive for about a mile under electric power. The PHV, when fully charged, extends that EV range to 13 miles, and to a theoretical top speed of 61 miles per hour (before the gas engine switches on). Charging with a 110-volt outlet takes about three hours, while a more powerful 220-volt setup will fill up the batteries in about half the time. Once the batteries run out of juice, the PHV reverts a normal hybrid mode, and according to Toyota, will hit about 50 miles per gallon.

The downside to this setup is that the PHV weights about 300 pounds more than the standard car, which certainly didn’t help with handling. When we last drove the third-generation Prius back in Winding Road Issue 45, we were pleased with the dynamic improvements that were made between generations. The steering had more feel to it, and while it was hardly an Ariel Atom, the Prius was at least capable of hitting corners at speed.

Those feelings of confidence go away when you drop so much extra weight into the car. The Prius still had decent steering feel, but we really noticed the weight shifting about when we pushed it. The standard Prius felt lighter on its feet and more agile than the PHV.

During a recent, long, and wintry weekend, we covered a total of 278 miles, with an average trip length of 18.5 miles. We will cut the drama and just come out and say it; the mileage we saw wasn’t what we were expecting. The third-generation Prius carries and EPA rating of 50 mpg on the highway (we were able to hypermile the car to over 70 mpg during the launch event), so we’d assumed that 50-plus would be easy for the PHV. And yet, we could only muster 45.6 miles per gallon over our long weekend, with one trip netting a high of 51.3 miles per gallon. Now, we don’t think this is all down to the car. Hybrids tend to get the best mileage in low-speed, urban conditions, where the drivers can use electric power for gentle acceleration and start/stop technology when at a standstill. Driving on freeways and at constant speeds (the majority of our driving) forces the gas engine to kick in, nullifying the advantage of a hybrid drivetrain.

This likely had a good deal to do with our relatively poor numbers. We were rarely presented with conditions where we could use the Prius’s natural advantages to generate the best economy numbers. Even driving around in Eco Mode netted little in the way of economy. The weather certainly wasn’t on our side either, as we were experiencing some of the chilliest days of the Michigan winter (so far) during our test.

We suspect that the twenty-degree temperatures had a significant impact on the performance of the batteries. We never saw Toyota’s claimed thirteen miles of EV power; we usually only made it about seven or eight before the engine kicked to life. Even driving the car in Eco Mode (which we did for the majority of our time with it), we found it difficult to keep the car in EV mode. It would often power up the engine of its own accord, and with no way of forcing the car into EV mode, we were really at the mercy of the computers.

Oddly, with careful throttle inputs, we were able to exceed Toyota’s 61-mph speed limit in EV mode. More than once, we hopped on the freeway with a full charge and once up to speed, comfortably cruised at 70 mph on nothing but electricity. This kind of treatment did drain the battery quicker than usual, but for short jaunts down I-75, it was fine.

While the mileage certainly wasn’t what we were hoping for, we have to commend Toyota on just how normal the PHV feels. Even when fully charged, it drives just like a normal Prius. The transition between pure EV and hybrid is extremely smooth. In fact, most Prius owners probably wouldn’t be able to tell the difference from behind the wheel.

According to a 2007 report by ABC News, the average American commute is about sixteen miles, which is just a bit beyond the Prius PHV’s range. Assuming the driver gets the full thirteen miles of battery power, and could recharge their batteries at work, they would still only travel about six miles per day (or thirty miles per five-day work week) on gasoline. Even with the relatively poor numbers that we saw, that figures to be only about two-thirds of a gallon of fuel per workweek.

That’s pretty outstanding, but it gets better. According to the Bureau of Transportation Statistics, the average new car sold in the United States in 2009 (the most recent data available) can achieve 32.6 miles per gallon. Using the same sixteen-mile trip to work means that the average driver will be going through a gallon of fuel per day, and five gallons per week. So even though we didn’t have the greatest experience with the PHV, it still makes a great deal of sense for commuters that can take advantage of its abilities.