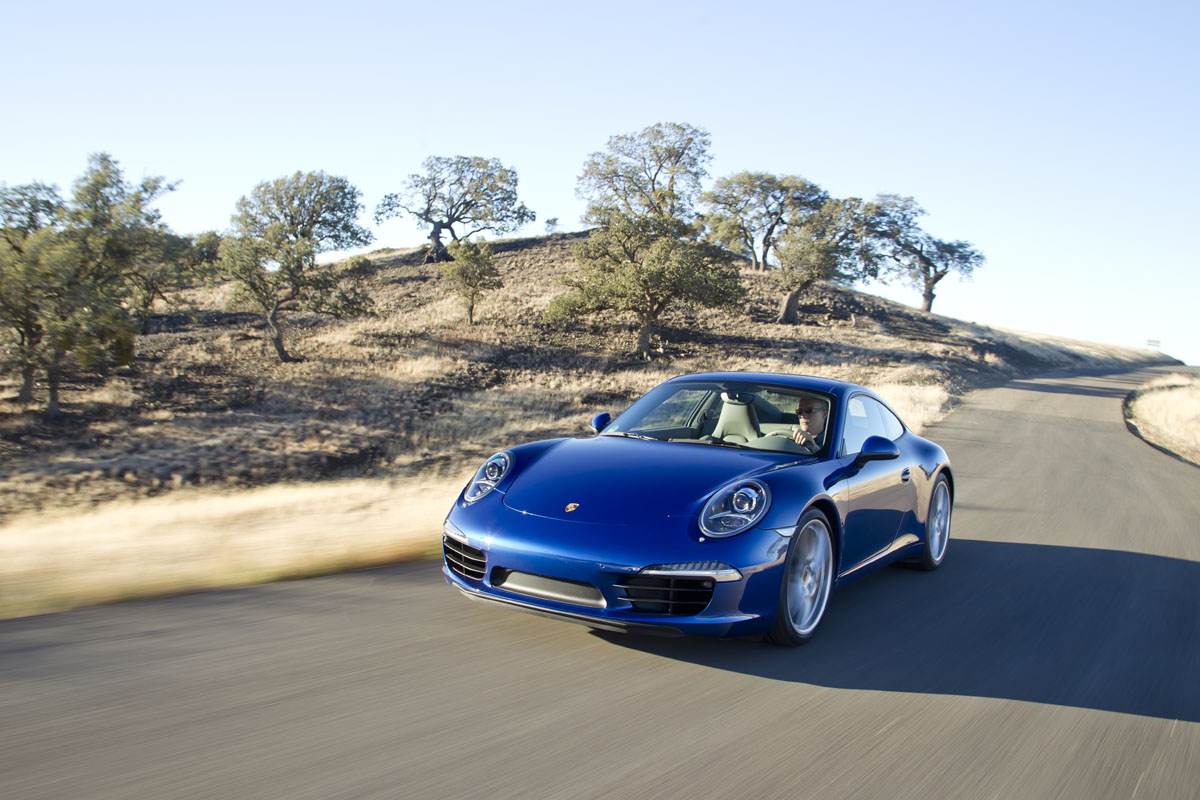 A new 911 is here. These are the moments that wreak such havoc among the armies of purists, and are, therefore, always the most fun times to be a car addict. Because of the adulation, devotion, and unrelenting attention due this new model, the 911 from Zuffenhausen starts life immediately trapped in one type of preconceived notion or another.

Porsche design director Michael Mauer and his crew have, rather beautifully, ignored these preconceptions, and simply handed us this stunning 991 911. Cue a huge, worldwide sigh of relief. That doesn’t mean that 49 percent of the public won’t be upset over something or other, but a majority should be quite thrilled.

The 991 911 is a fearsome undertaking the likes of which has not been seen in Weissach or Zuffenhausen since the 996 in the mid-1990s. Whereas then the engineers and designers were tasked with going water-cooled across the board and departing significantly from the iconic lines of the tight 993, today we are confronted by two former “untouchables” in the 911 legend: a larger-feeling, almost turismo sports car and electro-mechanical power steering. Yowzer.

So, we hop into the Aqua Blue 991 Carrera S–very sweet color, by the way–adjust the optional mondo 18-way Adaptive Sports Seat Plus and door-mounted side-view mirrors to suit our liking, and ignite this latest version of the 3.8-liter “9A1” flat six. Whereas the base price for the 997 II CS in late 2008 was set at $86,200, the new car leaps to an eye-popping $96,400 for essentially the same trim level in the late 2011 991. Get the 991 3.4-liter Carrera for $82,100 as equipped with the seven-speed ZF manual tranny. This is a reflection of all of the technological and design advancements, certainly, but it is also a clear sign that the Europeans are tired of making so little margin in the United States with our eternally hurting currency exchange rates.

The vast majority of drivers of 911s have not been the types of people to really get the most out of their car when confronted with a twisty, sunny, country two-lane. Rarely do they ever really take the engine up to the 7000-plus rpm zone. The majority love the 911 in little moments of gusto between traffic lights, and love the storied image a 911 brings to the minds of all of us. And, because Porsche constructs such a well-put-together, almost overly engineered machine, enthusiasts are sometimes satisfied to have it as a conversation piece in the garage.

We digress like this before launch simply because it’s important to accept that Porsche has conceived the 991 911 to better fulfill this more GT two-plus-two sporting car idea, versus continuing to work within the tight confines of the 911 layout as we have known it up until today.

When was the last time the 911’s wheelbase increased by nearly four inches? Now at 96.5 inches, that’s still nearly eight inches less space between axles versus the Ferrari 458 Italia, so it’s not as though the 991 violates the 911 recipe that much. After all, overall length versus the 997 II grows by just 1.2 inches. There are so many good things gained by letting the 911 stretch out a bit: more fore/aft adjustability for the front seats, more room in back for passengers who dare, even space enough to incorporate standard twenty-inch wheels. Further, greater mechanical efficiencies are gained by positioning the gearbox closer to the powertrain. Oh, yeah, we also get a sports car that we can drive to wicked limits without fearing excessive front or rear lift.

As we start off inland on a fetching two-lane scenic route through the coastal hills, it’s quite clear that this Carrera S has very much matured. As for the PDK action, it has noticeably improved its behavior with super clean shifts that are always quick, and do not bite us even in Sport Plus of the Sport Chrono Package. This is now the third generation of the PDK software, says 991 project manager Michael Schätzle, and whereas previously ZF provided not only the programming but also how it was specifically applied to Porsches, now ZF creates only the program, and then Weissach does the application in-house. This allowed for several more iterations of the software to be tested and improved upon, resulting in seamless upshifts and downshifts.

And honestly, we thought we’d be focusing really hard on the various inconvenient effects of turning the steering over to the electricians, but the feel at the wheel strikes a quite acceptable balance between assistance and lack thereof. Besides that litmus test, the action of the wheel, even in rapid left-to-right slalom movements, never starts to resist our input. Lock to lock, the wheel never binds. Working with hydraulics, Porsche really had taken the ancient art as far as it could go with such an “incorrect” powertrain arrangement as on the 911. Nonetheless, at speed and driving with spirit in any 997 II, the front axle would still get a bit too light and occasionally jittery. Today, the jitters are gone, and the feedback from the road surface is the most faithful we’ve felt yet via electronically assisted steering. Basically, every whine we envisioned whining prior to the drive was never whined.

Then, with the longer wheelbase, wider front track, lower stance to the ground, and additional negative camber at the rear wheels, the dynamics of this new 911 are hungry to eclipse those felt in the whole 997 chapter. In the very sportiest setup of the Carrera S (i.e. our blue tester with the addition of ceramic front discs), the 991 laps the Nürburgring in 7:40, or 14 seconds quicker than the Carrera S it replaces. Or the same time posted by the 997 II GT3, and three seconds faster than the Mercedes-Benz C63 AMG Black Series.

Top speed for the PDK-trimmed Carrera S with the Sport Chrono Package is estimated at 189 mph, while acceleration to 60 mph from a stop with this same setup is somewhere between 3.9 and 4.0 seconds flat.

And it really does feel this fast, especially when leaving the PDK transmission, suspension and throttle in Sport Plus. We ended up really enjoying the PDK in this more Porsche in-house hands-on version of the ZF software, since it is as fast as the fastest out there and all shifts create a terrific “bridge” growl from the exhaust. The Twenty-inch Pirelli P Zero tires–245/35 ZR20 (91Y) front, 295/30 ZR20 (101Y) rear–do create some real racket when we hit the older cement road surfaces, but on the smoother black asphalt the sound is silky. On a special autocross parcours at a local airport, this new steering, the chassis geometries, lighter and more rigid sprung weight, rear torque vectoring with torque braking of the inside rear wheel, and much improved suspension management, all allow for utterly brisk transitions that are ever so smooth.

Chassis project manager for the 991, Ulrich Mobitzer, explained the new improved Porsche Active Suspension Management for us. Whereas prior to now there was only an acceleration sensor on the left side of each axle, there are now three acceleration sensors and one wheel travel sensor at each hub. As with the extensive steering work, this PASM has been honed to greatness, and the three modes–Normal, Sport, Sport Plus–are distinctly separate, and each is much more sophisticated beneath us in its own right. The dynamic sway bars of Porsche Dynamic Chassis Control are available as an option only on the Carrera S, and our car stayed amazingly flat through each and every curve. All too civilized? We might just be able to live without the PDCC on our personal 991, though work it certainly doth.

We also spent a good couple of hours in a manually equipped Carrera S, it weighing some 44 pounds less than the PDK-equipped 991. Another frisky plus here is that only the manual cars come standard with a mechanical locking differential with 22 percent lock in acceleration and 27 percent in deceleration. The seven-speed phenomenon is another ZF PDK-derived setup, and the 0.71:1 seventh gear can only be reached when coming from either fifth or sixth gear. No surprises, it works great, though that lever is way over there to the right when seventh is engaged. On the other hand, the shift lever is very close to the steering wheel on the up-sloping and thick center console, an orientation that helps a bunch. Cruising in a manual Porsche 911 at 70 mph with just 2100 rpm on the tach is quite the new experience. Keep the optional sport exhaust switched off, too, and you really come close to hearing nothing.

In the driving of it, by the end, we realized that any fears of fat and lazy GT cars were unfounded; the 991, when driven as we like it driven, is all 911 all the time. It’s just the new upgraded interior, mention of electro- anything in the steering, and visibly longer wheelbase that can create fear in us or in you prior to doing the drive. With such a great start on the “normal” Carrera S, we are waiting with hot breath the arrival of all Turbo, GT3, RS, etc. trims to see how they up the ante. The 991 911 Carrera and Carrera S arrive together at dealers on February 4. So, do the drive.