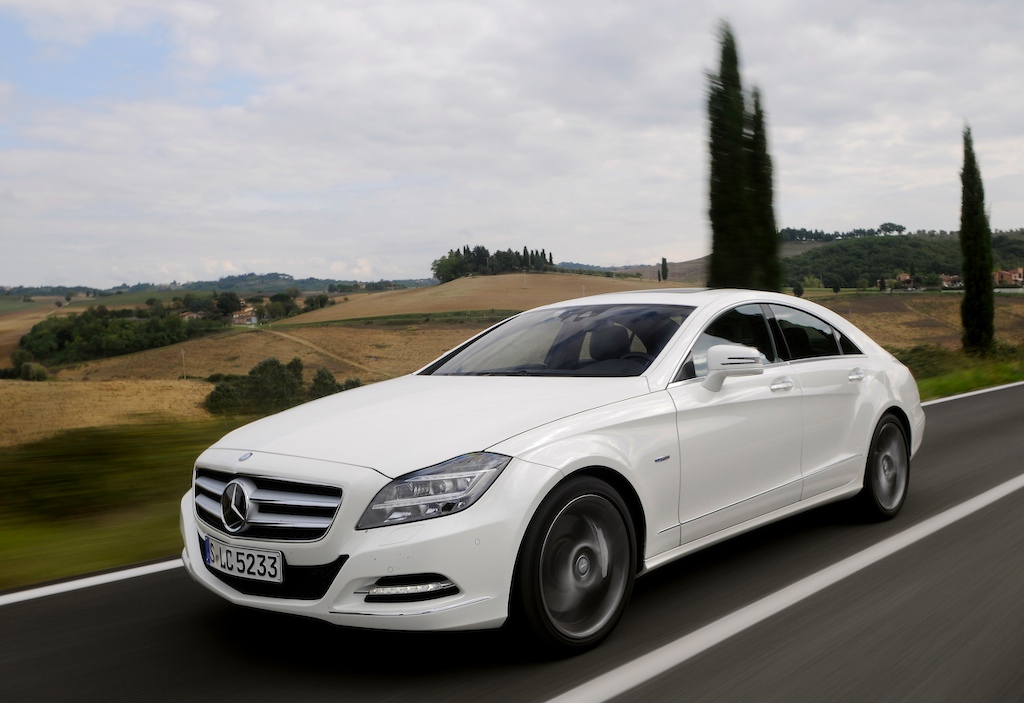 The Mercedes-Benz Vision CLS show car back in 2003 at the Frankfurt auto show absolutely stole the three-day press event. Rarely is there such a universally big positive reaction to anyone’s “vision,” especially when we’re talking about skeptical journalists. Even we loved it shamelessly.

And right into production in early 2004 and our drive just north of Rome, the first CLS didn’t lose one bit of its excitement for any of us. It will always be one of the most beautiful original cars ever introduced in the history of modern design. More than 170,000 CLSs have been sold worldwide since then.

So, the second-generation CLS cannot possibly repeat the effect of the first—just like any modern Porsche 911 is not capable of surprising the Porsche-jaded public anywhere near as much as the 901/Ur-911 did back in 1963 at the Frankfurt show. That’s the unique challenge of an icon or trailblazer: keep pleasing us a lot, but don’t expect us to be thrilled by each generation as if it was really “all new.”

We like the look and feel of the new CLS. The three main character lines of the side view, somewhat akin to the new BMW Z4 look, swoop together almost ideally, though the rear haunch reminds us all too clearly that the CLS is basically a fancy, lifestyle-focused E-Class sedan. That’s the only real pity as we look hard at the exterior details of the fresh CLS packaging: they should have developed a more unique line for the haunch to really separate it from the E-class. But she’s still very pretty.

And essentially, this second CLS (“C218”) is roughly 95 percent a redesign challenge exercise anyway, since technologically not so much actually changes for the company. And almost all of what is new for the CLS-Class has already been tested a lot on other larger Mercedes we’ve tested these past several months, like the E-, CL-, and S-Classes.

The engine we chose to focus on most is naturally the new BlueDirect (There are too many “blues,” Mercedes! It is very confusing) 4.6-liter, biturbo, gasoline V-8 good for 402 horsepower in the CLS550 model. We have always liked the naturally aspirated, 382-horsepower, 5.5-liter gas V-8 in any previous-generation 550s. This newest V-8—named internally “M278DE”—now pushes out 50 percent more torque at 1600 rpm versus the old motor, while overall using 22 percent less fuel. You can thank the two Garrett turbochargers and 52 more pound feet of torque for 443 total between 1600 and 4750 rpm. This means a 0-60 acceleration number right around 4.5 seconds, though Mercedes ain’t yet divulgin’ that until closer to the European launch of the CLS V8 (called CLS 500 across the pond) in April 2011. Ours arrive in June 2011.

We found a slightly different driving behavior from the drivetrain and powertrain. In the current big push toward 2014 European EU6 emissions regulations and US fuel efficiency regs for 2016, Mercedes is eager to get the lowest grams of CO2 per mile and greatest fuel efficiency possible from this generation of BlueDirect engines.

On most CLSs (i.e., those that do not opt for the AMG Sports package), the interface with the 7G-Tronic transmission, throttle, and electromechanical steering now has a button on the center console reading “E-S” for either Efficiency or Sport. Gone is the former “S-C-M” button for Sport, Controlled Efficiency (cum Comfort), and Manual, unless you order the AMG Sports package which, in its turn, gets a new “E-S-M” button. Every time the new CLS550 starts, the default setting is E. All of this is pretty clear and acceptable, and the car’s drive behavior is indeed more economical for the everyday styles of driving.

What we found is that the ECU commands the motor to behave in conjunction with the 7G-Tronic gearbox for maximal economy, sometimes overriding our shift commands, and other times holding onto revs an awful lot even in slower deceleration moments. All our test cars came with the new-look sports steering wheel and shift paddles. If a driver wants Manual mode now, he or she just needs to start using the paddles, and the car’s brain understands. We played around with S and E and the paddles all day. Sometimes while set in S mode, or while trying manual shifts, the shifts took their merry time happening whereas they would have responded quicker on the former S-C-M setup. This was sometimes odd feeling, since we know we like the new, generally faster reactions and more flexible valvetrain of this engine, and the multiplate-clutch 7G transmission. It’s just the new software that’s taking away a little of the traditional “Mercedes” feeling. US reps told us that there have been a few discussions about changes in this drive manner for North America.

Speaking with the Stuttgart development team, they reached the conclusion that what we were feeling was the system keeping revs higher as long as possible in order to keep the new catalysts heated so that more emissions burn-off would happen in the exhaust phase. An old but good smog test trick finally gets its close-up?

This tech nitpick aside, every single other aspect of the whole new CLS lineup is exceptional. We would add that we’re lucky to get as standard the Euro-optional Airmatic suspension with Comfort and Sport modes; it is essential to the CLS maintaining its luxury image as it cruises season-battered North American roads. And the space inside, and the comfort therein, is increased nicely, particularly in shoulder and hip width at 1.2 inches more rear and 0.9 of an inch in front. Tech-wise, the latest electromechanical steering is wonderful stuff under all conditions, even on our nineteen-inch wheels and tires (eighteen-inch is standard), and the High Performance self-adjusting headlamps are extremely precise and intuitive.

Despite the slight growth in all dimensions of this freshly attractive CLS, the wide use of aluminum paneling for the body and some support structures actually keeps the weight gain contained—4,167 pounds for the CLS550. The car’s drag coefficient is significantly better, too, at 0.26, which improves fuel efficiency while lowering exterior wind noise at highway speeds. Due primarily to the stiff, frameless aluminum door panels, static rigidity compared to the first CLS is up by 28 percent, torsional rigidity up 6 percent. Hence again the welcome compensation of Airmatic dampers. Another added benefit of the puffier body is that trunk volume is up by 2.5 cubic feet versus the outgoing CLS.

Only one other nitty pick: why do expensive premium Mercedes like this CLS550 still rely on the 1990s-era left foot-punch parking brake (ratchet-ratchet on, ka-THUNK off) when everyone else has moved on to the far more elegant electric finger-flicked version? It’s a sour note of inelegance on what is meant to be a thoroughly elegant car.

Sales in Europe of the CLS V-6s start January 29, 2011, followed in March by the planet-saving CLS250 CDI four-cylinder, and then in April by the CLS500. Next summer, too, the CLS lineup finally gets its own 4Matic versions.

So, does it sufficiently carry on the CLS fervor? Do the more rotund lines inspired directly from the F800 Style concept at the last Geneva show light the fire under buyers’ rears like the 2003 Vision original? We like it enough this time around to give it our vote of confidence, certainly. C219 is a very tough act to follow.